When Mary Schweitzer found soft tissue in dinosaur bone in 2005, her boss got mad.

“Dammit, Mary, the creationists are going to love you,” Jack Horner snapped, according to what she wrote for Biologos.

Indeed, Schweitzer discovery threatened to upset the evolutionary biologists’ timeline for the world because soft tissue decays relatively quickly. If she found soft tissue in bones from a Tyrannosaurus rex perhaps it wasn’t 68 million years old, as the geologists argued. Maybe it was just a few thousand years old – trapped by sediment in a catastrophic worldwide flood and fossilized. 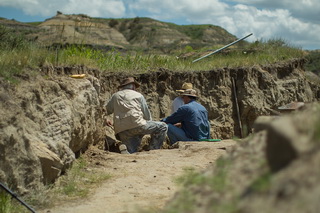 “I invite the reader to step back and contemplate the obvious,” wrote Carl Wieland on the Answers in Genesis website. “This discovery gives immensely powerful support to the proposition that dinosaur fossils are not millions of years old at all, but were mostly fossilized under catastrophic conditions a few thousand years ago at most.”

For its part, Creation praised Schweitzer’s research as “powerful testimony against the whole idea of dinosaurs living millions of years ago. It speaks volumes for the Bible’s account of a recent creation.

The Christian Science Monitor reported this January that scientists found collagen, a protein basic to animal tissue, in an allegedly 195-million-year-old fossil of a Lufengosaurus dinosaur in China.

Proteins are complex molecules which break down quickly and can’t survive for a millennia.
.
But Schweitzer, a conservative evangelical Christian who adheres to evolutionary theory, floated the theory in 2013 that iron may have preserved the soft tissue much like formaldehyde. If shown to be true, her theory would take wind out of the sails of the young earth Christians.

Schweitzer got her start in paleontology after studying molecular biology. She audited a course with famed paleontologist Jack Horner, the scientist who is trying to create dinosaurs in modern times from chicken DNA. Horner consulted for the movie Jurassic Park.

Schweitzer was thrilled with the course, worked her way through her doctoral degree and began lab work under Horner.

Through three summers of digging , Horner unearthed a T. Rex skeleton from an escarpment in northeastern Montana at Hell’s Creek. Because of the remoteness and rugged terrain, the bones had to be helicoptered out but were too heavy, so the team reluctantly broke one of the leg bones into two pieces. 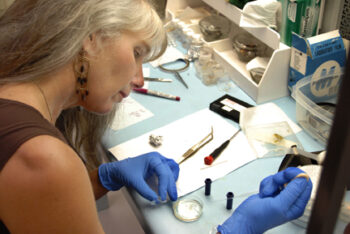 When he got back to the lab, Horner handed some of the resulting fragments to Schweitzer to analyze. The first thing she realized was the dinosaur had been a pregnant mother because of the presence of medullary bone, which is a calcium overproduction to supply the eggs. (Originally, the fossil had been nicknamed “Bob.”)

But the real astonishment came when Schweitzer’s team dissolved some fragments in weak acid, a practice that was never done before because it dissolves bone matter. The lab assistant had only tried to eliminate the outer crust on the bone but wound up disintegrating all the hardened minerals.

When Schweitzer looked at the only remaining chunk under the microscope, she couldn’t believe its elasticity. It took her quite some time to realize that it was soft tissue, which, being from a dinosaur bone, had never before been seen by a scientist.

The implications sent people reeling. The creationists, who vie for a literal interpretation of the Genesis account, latched onto the finding because there was no possible way soft tissue could last the millions of year needed in the biologists’ timescale for animals to evolve.

But the creationists weren’t the only ones. The Jurassic Park crowd also crowed. If soft tissue and proteins could be found, maybe a complete string of dinosaur DNA would crop up. Then, maybe scientists could use it to create a dinosaur.

Schweitzer is non-plussed by either crowd. Poring over Cretaceous-era dinosaur bones has done nothing to weaken her faith.

“My God has gotten so much bigger since I’ve been a scientist,” she told Discover magazine. “He doesn’t stay in my boxes… The thing that’s most important to God is our faith. Therefore, He’s not going to allow Himself to be proven by scientific methodologies.”

She sees God’s hand in evolution through millions years. “That makes God a lot bigger than thinking of Him as a magician that pulled everything out in one fell swoop.”