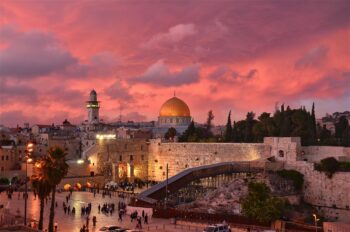 Hard to believe that it was 50 years ago that Jews and Jerusalem were at long last reunited. It took God all of six days to create the world; it took modern-day Israel the same brief length of time to liberate the holiest city in the world from the hands of those who never understood or accepted its true sanctity.

The Six-Day War was by all accounts a contemporary miracle. Israel’s enemies made clear their intent. It was not land that they wanted as much as Jewish lives. The Arabs assured the world they would finish the task Hitler started. The Holocaust was the unspeakable genocide of six million. The Arab leaders who surrounded the tiny Jewish homeland boasted that this time what remained of the Jews after the Nazi concentration camps and crematoria would at last be totally destroyed.

Military analysts are still stunned when they study what actually happened. Generals at West Point have been quoted as saying that Israel’s victory can simply not be understood from the perspective of strategy in historic warfare. One officer, who understandably chose not to be quoted by name, simply said, “There is no way we can teach the reason behind Israel’s success because Israel was clearly aided primarily by God – and we are not permitted to teach God at West Point.”

Fifty years have not dimmed the memories of the miracles of that glorious moment in history. It was as a result of the Six-Day War that we recaptured the site on which King Solomon built the First Temple and on which, after a brief period of exile, we returned and dedicated the Second Temple as well.

And 50 years after 1967 we need to especially take note of the biblical significance of the number 50 with regard to the land of Israel. The message of the 50th year reminds everyone of one major truth: it is not we who own the land; “the land is Mine,” God tells us in the Torah (Lev. 25:23).

When the 12 tribes first came to Israel the land was divided among them. Everyone shared equally in the economic benefit of landownership. But no one was permitted to view possession of land as permanent. Jews might work the land, harvest its produce and enjoy its fruits. They could even purchase more land or sell off what they owned if they so desired. But in the 50th year, the Jubilee year, all land returned to its original owners. The Jubilee year was a recurring reminder that God alone, as the creator of heaven and earth, was the true titleholder of all the land on which we live and all the places we call home.

Every Jewish child who begins his study of the Torah with the verse which teaches us that “In the beginning God created the heavens and the earth” is familiar with the famous comment of Rashi, the most famous rabbinic commentator on the Bible. Why does the Torah, as a book of law, begin with this extra-legal information? So that if anyone ever questions our claim to the land of Israel we will be able to respond that God, as Creator and Master of the universe, can transfer His ownership to whomsoever He pleases – and it is God who has apportioned His land to His people, the children of Israel.

Rabbi Abraham Isaac Kook, the first Ashkenazi chief Rabbi of Palestine, made an astounding prediction some years before the establishment of the state of Israel. Reflecting on the biblical number associated with the Jews who left Egypt, Rabbi Kook suggested that when the population of Jews in Palestine would similarly reach the total of 600,000 it would be a wondrous sign for the beginning of our national redemption.

Amazingly enough, it was only in 1948 that Jews for the first time equaled the biblical number – the very year in which the world witnessed the contemporary miracle of the establishment of the state of Israel!

There is another number which in modern times carries significance comparable to 600,000. It is tenfold that number – and bears with it the memory of tragedy beyond parallel. Six million were the victims of the Holocaust, the number of those who were barbarically murdered by a regime which plotted a “final solution” for the Jews.

That is why it is so important to mark another milestone of modern-day Israel – a milestone we may now celebrate on the occasion of our 50-year celebration of Yom Yerushalayim. The population of Jews in Israel today at last exceeds that number so starkly identified with tragedy. There are now more than six million Jews who make Israel their home. In the Jubilee year of Jerusalem’s reunification more than six million Jewish souls in Israel joyfully proclaim the reality of the biblical message of the 50th year: the land belongs to God and our generation has become witness to the divine decision to reunite us with Jerusalem.

This story originally appeared on Aish.com. Headquartered in Jerusalem near the Western Wall, Aish.com is a division of Aish HaTorah, an apolitical network of Jewish educational centers in 35 branches on five continents. This partnership enables Aish.com users to experience the richness of community at an Aish branch.

The name Aish HaTorah literally means “Fire of Torah.” As Elie Wiesel said: “Aish HaTorah means to me the passion of teaching, the passion of learning. The study of Torah, the source of Jewish values, is the way to Jewish survival.”

Aish’s educational philosophy is that Judaism is not all or nothing; it is a journey where every step counts, to be pursued according to one’s own pace and interest. Mitzvot (commandments) are not rituals, but opportunities for personal growth, to be studied and understood. We learn the Torah’s wisdom to enrich our own lives, and to share these ideas with all humanity.

As a non-profit organization, Aish.com relies solely on private support to continue providing its wide range of quality content. Plans for the near future include an advanced learning site, and an online Hebrew School.

Not just information, but inspiration. Aish.com is the lifeline for hundreds of thousands of people across the globe, seeking Jewish answers to life’s most perplexing issues.