He doesn’t fit the mold of some who have had near-death experiences. As a trusted financial advisor and founder of Destiny Capital, he manages over $325 million for his clients.

He’s also had two trips to heaven that left him profoundly changed. 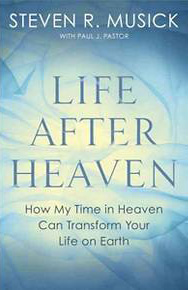 Born in Denver, Musick grew up attending Christ the King Episcopal Church, where he accepted Christ at seven-years-old. “I didn’t understand the depth of what that commitment meant,” he recounts in his book. “I went through catechism, was an altar boy, and always loved being in church.”

After his first year at college he ran out of money, so he enrolled in the navy’s scholarship-at-sea program, thinking it would be an adroit trade-off to have the government pay for his education while he served.

At a strapping 195 pounds, no one was able to knock him off his feet during basic training. He decided to try out for the SEALS, and was one of only three who made it through the initial selection process. But then the Navy dangled an offer before him he couldn’t refuse: a scholarship to the Naval Academy at Annapolis.

A week after he received the news, he and other sailors received inoculations using a new swine flu vaccine. “The serum (with live virus) was much too strong,” Musick recounts. “Lots of soldiers at Fort Sheridan and the sailors at Great Lakes had a very severe reaction.”

Musick came down with a wicked case of the swine flu that lingered for months. Finally he checked himself into emergency room at Great Lakes Naval Regional Medical Center.

“I had an IV in my arm and a navy nurse walks in and she had a syringe fully loaded with what they thought was the antidote to the swine flu vaccine. It turns out I was allergic to the antidote. They introduced a lethal dose directly into my system. My right arm got really hot. That heat got all the way to my armpit and then the lights went out.”

For the next five weeks Musick was in a coma in ICU. During the time in the coma, Musick had his first encounter with heaven.

Like others who have had near-death experiences, he was transported through a white tunnel. He flew through the tunnel weightless – at incredible speed – and landed at the other end in a beautiful rolling green meadow.

“There was a big wheat field to my right,” he recalls. “There was a gigantic oak tree in front of me and rolling hills and forests to the left. It’s the most vibrant place you can imagine. Nothing compares to it on earth. It’s a real place with geography, real gravity,” he says.

In the book he describes the vibrancy of heaven like “super high-definition television on steroids.” He could hear worshipful music in the background that infused everything, like it was part of the fabric of the place.

Musick was overwhelmed by joy. “Part of the stark contrast (with earth) is that heaven is pure joy and there is no ebb and flow to it. It just comes after you and it’s relentless. It’s the best thing you can imagine,” he says.

God’s peace also erupted within him. He felt like he had arrived at his true home, a place more real and more physical than this world.

Then a strong arm grabbed him around the shoulders in a tight hug and said, “Welcome…walk with me.”

It was Jesus. He describes Jesus as about 35-years-old, with shoulder length brown hair, and a muscular, “working-man’s body.” Musick says he was wearing a white robe, with simple brown sandals on his feet.

For all His strength, he was also gentle, radiant, glowing. “There is a certain light about his countenance,” Musick notes in the book.

A month ago, Musick went to a conference that included a presentation by the

photojournalist Michael Belk, who has recreated some of the Gospel stories in artful photographs. “The guy he chose to play Jesus in those photos is a spot-on image of who I saw. When he put the picture of Christ on the screen it took my breath away,” he notes.

In his heavenly encounter with Jesus, the Lord reviewed Musick’s life, providing an eternal perspective on some of the wounds he suffered in his past. “His words were like oil or salve, healing a place where I had been hurt or broken.”

He began to see his parents in a new light. Even a wound he suffered in his junior year of high school with a cheerleader was explained to him.

Like many others who have had such experiences, Musick did not want to leave heaven, but Jesus told him he couldn’t stay. Immediately he was flying through the white tunnel, and in a brief moment opened his eyes in ICU to see a nurse leaning over his bed.

Musick returned to a body devastated by swine flu and his allergic reaction. When he left the hospital his weight had dropped from 195 to 126 and two-thirds of his lung capacity was damaged beyond repair. He had to relearn how to walk.

Unfit for SEALS or Annapolis or military service of any kind, he was discharged as “disabled.”

He had never studied the Bible before, but bought a study Bible and began to dig into it with a hunger for the first time in his life.

Growing up, he knew who Jesus was, knew he was saved, but for the first time he began to grow in his knowledge and love for God and His Word.

Another miracle in his life was that the young woman he met in his freshman year of college, Elaine, stuck with him through his illness and they were married in a small chapel on the University of Denver campus when he was 20-years-old.

It took Musick 10 years before he told Elaine about his experience in heaven. They had two boys together, but because of his physical limitations, he couldn’t do all the things with his boys he wanted to do.

Later, working as a financial advisor, he typically missed several day of work each month due to his compromised immune system.

In 1984, Musick and his wife began attending the Denver Vineyard. “This was a church that prayed for miracles,” he recounts. Surprisingly, Musick never thought to ask for prayer for his lung condition, which his doctor considered permanent.

“I was told to get used to prednisone, hydrochlorothiazide, and my general rotating cocktail of meds to try to keep fluid out of and air getting in and out of my lungs,” he explains in the book. Meanwhile, his heart had enlarged by 50 percent.

On a Sunday in June, 1986, Musick felt himself getting sick. The next day he had fluid in his lungs. By the following Thursday, he could barely get out of bed to dress himself. He told his wife he wanted to go to the Thursday evening prayer service.

“Are you kidding?” she asked. “You ought to be going to the hospital.”

But Musick knew he needed to be at the service that night. He says the worship was powerful and at the end, Pastor Tom led an altar call for repentance, salvation, and healing.

Musick didn’t go forward, but watched a stream of people go up to receive prayer. As things were about to wrap up, Pastor Tom said, “Someone here has been dealing with a malady for years – a decade. You’ve been sick all week…I think you have a respiratory thing.”

No one in the church knew about his history of sickness and disability, other than Elaine. Musick got up from his seat and slowly began to walk forward. An associate pastor, Randy Phillips, met him in front, and reached out to pray for him, putting his hand on Musick’s chest.

He felt a jolt of electricity go through his body and fell to the floor, completely out.

Amazingly, Musick’s book records the details of a second encounter with heaven during the 20 minutes he was on the floor. It also recounts the miraculous healing he received when he awakened!

Life changed after this second visit. “The most important thing is that I could play with my kids,” he says. “I could be a full vital romantic partner to my wife. That’s a pure gift. I was prepared to live a life as a disabled person. But God in his sovereignty said that’s enough.”

His relationship with God also deepened. “Suddenly the communication lines got blown right open,” he says. “Prayer became conversational instead of a one-way road where prayers go up to the ceiling. It became a dialog.”

This was augmented by his personal devotional times and journaling. “I’m a regular guy and I think everybody could have that,” he notes. “I still have that unobstructed flow of communication. The Father is omnipresent. He says He is closer than you think. The Kingdom of Heaven is closer than we think.”

“The thing about Jesus is that he forces you to be present in the moment. You don’t think about the past or future. He commands full presence in the moment. Now 41 years later I still have the residue of that. Once you’ve had that kind of experience you want more.”