Gage Jalbert – of French lineage –met Rikki on payday outside a Walmart in Oklahoma. She was a pretty blonde recently divorced from the father of her child, and they struck up a conversation.

He was due to leave for Japan with the Marines within a week, so they hurriedly got married in 2006. Rikki’s ex-husband would not allow their 3-year-old daughter to go overseas, so the newlyweds decided on a long-range relationship.

After the first year of marriage, Gage found out about his wife’s failings. Remembering the God of his youth, he told her she needed to go to church. He himself occasionally went to chapel but wasn’t stirred much by the service. Rikki didn’t appreciate his judgmental attitude. She knew that Gage was slipping up too.

“We were not saved,” Gage says. “We had all this sin in our lives. It was an unhealthy relationship.”

Gage began to pray for God to rescue his marriage.

The couple talked on the phone, mostly arguing and threatening divorce.

By October 2007, they decided to end the marriage. Gage’s superior had a father who was a lawyer who agreed to handle the legal details. In the meantime, Gage was offered a six-figure job with air traffic control, his specialty in the Armed Forces, in Denver. Simultaneously he struck up a romantic friendship with a model whom he had known in school. 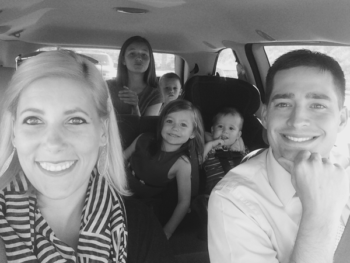 Because he was praying, and because everything seemed to be lining up, Gage decided this was God’s will.

Two months later, he gave his wife one last shot to see if they could revive their marriage before resorting to the backup plan. But Rikki didn’t want anything to do with him. They argued: “Yes, I did this. But you did that. What you did was worse.”

In a heart-breaking moment, her child, Hannah, only 4 years old, told her step-dad: “You’re not my dad. You made my mom cry. You need to leave.”

In one argument, God broke through and spoke to Gage: “Look at the situation you’re in. Look at what you’re going through. You’ve been praying for six months for things to change. Why haven’t I changed things?”

Gage didn’t know the answer. Inside his head, he prayed and asked God why.

“I haven’t changed anything because you have refused to surrender.”

A Marine never surrenders. Surrendering means you give yourself up completely to your enemy.

These words pierced Gage’s heart. He fully understood the implication.

“I realized I was an enemy of God.”

Gage left the apartment and went home to his dad’s to pray. With just a few days until the divorce would be finalized, he decided he would pray, read his Bible, read Christian books and worked at fully surrendering to God. He would contend for his marriage.

On divorce day, he went to pick up his wife. He asked her one last time if she would try to work it out. She was adamant.

They went to the attorney. While the lawyer lectured Gage about trying by all means to avoid divorce, Rikki stayed in the car. She didn’t want any lectures. All she wanted was to sign divorce papers.

Gage figured he’d done everything he could to save his marriage. He was now free to pursue the career and the girl in Denver. In the meantime, he had to report back for duty in Japan, and he would work on fully surrendering to God.

A couple days after signing the papers, Rikki needed to see her husband about some issues and went over to her father-in-law’s.

That’s when she spied Gage praying in his room. She nearly cried.

“I remember feeling like I was going to cry,” Rikki said.

Was it too late to undo the damage of signed divorce papers?

While Gage flew back to Japan, Rikki went to see her pastor, confessed her sins and fully and deeply repented.

She went down the courthouse and, saying she had power of attorney for her husband, asked for their recent divorce filing. It was probably a breach of protocol, but the official gave her the paper, and she ripped it up right there.

She called her husband and gave him the shocking news: “I tore up those divorce papers!”

Gage was flabbergasted. It came completely unexpected. In fact, he had given up and figured that God had the other girl for him. His response was far from warm.

But God was still working behind the scenes, softening and hardening hearts. Inexplicably, his girlfriend in Denver stopped calling. He wasn’t sure if he should call her. After a week, she called, but Gage felt like he shouldn’t answer. She never called again. God forcefully shut the door on that relationship to save his marriage!

He was completing his stint in the Marines. He only called Rikki to make sure she got the money he deposited in her account. Until the divorce papers finalized, he would honor his commitments to his wife. He was always curt, limiting conversation to confirmation that she in fact received the funds.

On her side, Rikki kept attending church. She stopped the pot and the infidelities. She was praying.

“I started committing to contending for my marriage,” Rikki said.

As his transfer approached, he made plans. God was prompting him. He would go to Oceanside, California. He called Rikki to see if she would go with him.

“You could hear the smile in her voice,” he said. “When we drove to California, it was like a clean start. It felt natural to be around her.”

They began growing in the Lord at the Potter’s House Church in 2008.

Today, they are pastoring the Potter’s House Church in Canyon Country, California, just north of Los Angeles. Their family has grown to include four children.

“I didn’t realize that I needed to surrender before God could move in my marriage,” Pastor Gage said. “When I finally did surrender to Him, then things started falling into place.”

Rikki sees the end of the blame game as the beginning of rebuilding their marriage.

“Instead of blaming and trying to change the other person, you need to look inside and change yourself,” she said.