A female police officer in Argentina delivered a baby while she was in a coma, then woke up and held her three-month-old for the first time.

Many are calling it a miracle of God.

Amelia Bannan was nearly six months pregnant when she suffered a serious brain injury in an auto accident November 1st.

She had a premonition about traveling that day. “Let’s not travel, if we get into that car it will just roll over,” she told a friend, according to El Pais.

When the car was hit from behind, Bannan suffered a skull fracture, but the baby survived. The other occupants of the vehicle were unharmed, according to El Pais.

Since the accident, the baby developed normally in the womb while Amelia lapsed into a coma caused by a blood clot in her brain.

In late December, Amelia opened her eyes, moved her hands and although she was not able to speak, began contractions.

Little Santino weighed 4.16 pounds and stayed a month in a neonatal care unit. “He was born and grows well, he does not have a complication of anything. He is a total warrior,” Caesar said.

Every day the family brought the baby close to Amanda, but there was no response. Then a week before Easter, God answered their prayers in an amazing way. 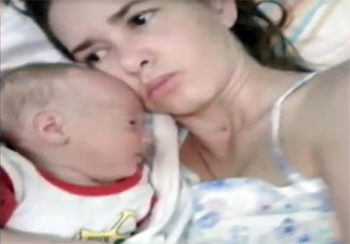 “We were in the clinic with Norma, my other sister,” Caesar told El Pais. They were speaking to Amelia without any response, but suddenly they heard a very faint ‘yes.’

“Amelia, if you understand me, stick out your tongue,” Caesar instructed.

Amelia stuck out her tongue!

Their prayers were answered! “It was a total transformation. Norma lay on Amelia’s body, embraced her, and wept tears of joy,” Caesar told El Pais. “It transformed our hearts.”

Amelia is improving quickly, according to the physiotherapist who supervises her rehabilitation, Roberto Gisin.

“At first she only said ‘yes’ and ‘no’, now she is managing to answer questions and understand commands,” he told El Pais. 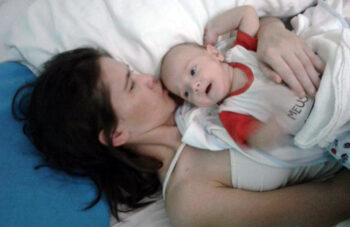 Dr. Gisin said Amelia can already turn around by herself, move all four limbs and he believes that if there are no setbacks she’ll be walking in a few months.

“She keeps surprising us,” neurosurgeon Marcelo Ferreira says. “We hope that at some point, we will be able to see her walking holding her son’s hand.”

Her family knows her full recovery will take time, but they celebrate every little improvement.

Amelia’s greatest joy is the baby, who she kisses and caresses when she can have it on her chest, twice a day. At first he did not recognize him and thought he was her nephew. “She remembers more and more things from her childhood, but not pregnancy,” her brother told El Pais.

It is still too early to know if Amelia’s accident will leave lasting impairment, but the family prays it will not.

Caesar believes his sister’s story will inspire others: “We have hope and we want to spread it to those who are in a similar situation.”

Just as Moses’ upraised arms signaled victory in battle, Caesar gives credit where credit is due. “We have already seen that miracles are possible, we should never lower our arms.”