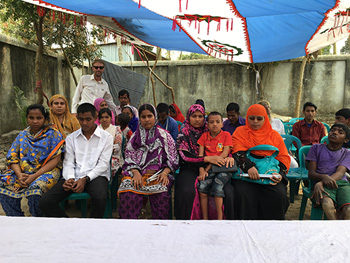 Sandwiched between India and Myanmar, Bangladesh is the third largest Muslim-majority country in the world. Often beset by floods, cyclones and tornadoes roaring through the Bengal Delta, it also has the sad distinction of ranking number one in the world for children suffering malnutrition.

Bangladesh is 89% Muslim and nearly 10% Hindu, according to the Joshua Project, with Christians numbering less than one percent.

One ministry leader, who recently completed a fact-finding trip to the country, believes Christians are being undercounted. “Christianity is much larger and growing, especially in the rural areas,” says Jim Jacobson, president of Christian Freedom International (CFI).

On his trip, Jacobson interviewed scores of indigenous Christian pastors, street evangelists, missionaries and converts to Christianity. “According to them, Christianity is on the increase and the growth is a cause of concern for the Muslim majority,” he notes.

“As a result, persecution is on the increase against the fast growing, mostly underground Christian church.”

One 60-year-old pastor, a former Muslim, reported to Jacobson that 20,000 Muslims have converted to Christianity among the hill tribes of northeast Bangladesh in the last 12 months. This pastor faces many hardships, has been beaten numerous times, and must pay bribes to police to continue his ministry.

Another pastor and Muslim convert to Christianity told Jacobson that in his district more than 6,000 have converted to Christ since 1991. This pastor has been targeted for assassination by ISIS. He told CFI, “Of course I am afraid, but when I think about my spiritual life I am not afraid. We continue to preach no matter what.”

Jacobson believes the under-reporting of believers is because most tallies only count “traditional Christians,” i.e., people born into the Christian faith who attend government-approved churches.

“But ‘converts,’ those who change their religion from Islam to Christianity are not counted and no surveys have been made,” he contends.

Jacobson says the number of Christians in Bangladesh may be as high as 10 percent of the population.

Even more remarkably, some indigenous evangelists told him they believe that Bangladesh will become a Christian nation in their lifetimes!

“If the 10 percent number is correct, there are at least 15,600,000 Christians in this Muslim majority nation. Evidence seems to support the claims,” he notes.

One pastor told Jacobson that after he converted in 2007, his rickshaw shop and tea business were taken away from him and he was disowned by his family.

“Two Imams caught him talking about Christianity in the market and attacked him. The Imams beat him and tied him with ropes in front of a nearby mosque. His sons ransomed him only after they agreed that they would force him to reconvert to Islam.”

When the sons failed to persuade him to return to Islam, they beat their father nearly to death, took all his possessions and left him for dead.

In this pastor’s rural village, he has seen more than 700 Muslims convert to Christianity in the last two years.

Another pastor Jacobson interviewed saw his family disown him after his conversion, his wife leave him, and the loss of his job. “I am dead to them,” he told Jacobson.

Babul, a Muslim who converted Christianity in 2013, once worked as a day laborer. After his conversion, Babul’s life was threatened and he was disowned by his family. He had to go into hiding in the jungle to survive. After eight months in the jungle, some Christian converts helped him. He is now a “street preacher” and faces many hardships to share the gospel. He has been beaten numerous times but sees it as a badge of honor.

Bakar, a Christian convert told CFI, “Christianity is really growing in Bangladesh. The next generation is becoming Christian. We believe that Bangladesh will become a Christian nation one day. Islam has no mercy, no compassion, no love. It has nothing to offer. Christianity offers the assurance of eternal life, it offers hope.”