When a student’s father at St. Francis High School in Mountain View, California recommended the school invest $15,000 in a start-up company now called Snap Inc., little did they know they would reap a $24 million windfall.

It seems that high school student is the daughter of Barry Eggers, founder of Lightspeed Venture Partners, Snapchat’s first investor, according to the L.A. Times.

In 2012, Eggers was intrigued when he saw his two children enthralled by the new app. Eggers’ partner tracked down the founder of Snapchat, then operating the business from a Stanford dorm room.

Eggers pitched the investment idea to the board of the school and they bought into it. A short time later, Snapchat received their first investment from an outside source, totaling $500,000 — $485,000 from Lightspeed and $15,000 from the school.

When the school sold-off two-thirds of its shares at $17 apiece, it reaped a phenomenal return on their initial investment.

“St. Francis has been blessed to have parents who so passionately and generously share

their gifts with the school,” high school President Simon Chiu noted afterward. “These are exciting and humbling times.”

Chiu said they will use the money to increase financial aid and make improvements to their facilities, according to The Times.

The founders of Snapchat, Bobby Murphy and Evan Spiegel, became instant billionaires as the stock value rocketed upward on the first day of trading. It gained an additional 10% on Friday, closing at $27.09.

Lightspeed Venture Partners made $147 million, a big pay-off for Eggers and his group. 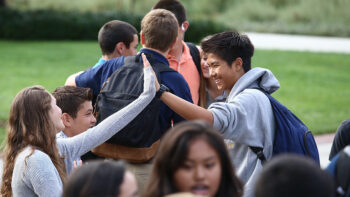 Snap Inc. became the largest IPO since Alibaba raised $25 billion in 2014. Hundreds of workers at Snap Inc. could also become millionaires when they are allowed to sell their shares, according to The Times.

Actor Ashton Kutcher, rejected the opportunity to invest in an early version of Snapchat after meeting Spiegel because he thought the app looked bad and would raise security concerns, according to The Times.

St. Francis High School has invested in start-up companies since 1990 through a growth fund created at the recommendation of two venture capitalist parents. The fund continued to hold a third of its Snap shares, which may or may not be a lucrative bet on the future of the company.

Ironically, the school prohibits students from using Snapchat at school. They have a no-phone policy during class, lunchtime and break time, Holly Elkins, the school’s director of institutional advancement told the L.A. Times.

“We want students to socialize and enjoy each other,” she said.