At a Muslim-majority public high school on the outskirts of Sydney, Australia, a principal who converted to Islam fostered an atmosphere of increasing radicalization among the students, leading to his removal along with his deputy.

Principal Chris Griffiths and Deputy Principal Joumana Dennaoiu were both removed from their roles at Punchbowl Boys High School after an investigation by the Education Department uncovered the disturbing trend, according to the Daily Mail.

Islamic students were threatening to behead non-Muslim teachers and were openly declaring themselves ISIS sympathizers, it was alleged.

The principal – who converted to Islam in 2014 – refused to cooperate with a de-radicalization program for the school.

Following his conversion, relations between police and the school took a turn for the worse. “Students were being told that if ‘the pigs’ stop you, to film them and refuse their directions,” a senior officer told the Daily Telegraph. “The students were being led down a dangerous path by the principal. We had concerns about radicalization.”

The principal and his deputy also prevented female teachers from participating in official events such as the most recent graduation ceremony, it was alleged.

The Education Department directed an “extensive appraisal of the school’s policies, procedures and management,” provoked by a number of troubling staff complaints in 2016, before the two administrators were removed.

The investigation demonstrated “a high level of staff disunity and disharmony” and “increased disengagement” of the school from the community. 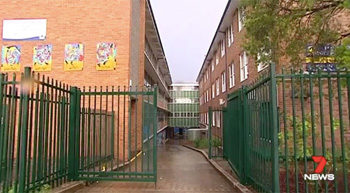 The former principal and deputy principal have not actually been fired, but are still employed by the education department and will be on leave. They will not return to the same school, according to officials.

In previous years, the school had a reputation for being controlled by Middle Eastern gangs, and problems with drugs and violence seemed to fester. But the principal who served prior to Griffiths had led the school to improved literacy and graduation rates.

The new principal, Robert Patruno, previously ran the education unit inside Reiby Juvenile Justice Centre, according to the Daily Mail.