The very first time Noor Allem killed a man, he could not believe how it made him feel. The man he killed, a businessman, owed money to a gangster in the city, and he had refused to pay it. In fact, he had insulted the gangster by telling other people that he was a fool to even think he would repay.

Noor Allem was a criminal who earned his weekly wages by threatening, beating and torturing people that were in debt to the gangster. Now he had been ordered to kill the businessman, and he couldn’t say no. Not because his usual pay was doubled, but because refusing the gangster might lead to his own death.

There was very little risk. The police here in Bihar were afraid of the gangster, and avoided confrontation with him. They were ineffective anyway. Noor Allem had spent very little time in jail, in spite of the robberies and violence he had committed. They could never prove his guilt. He was nervous, thinking of the killing, but as he cleaned his gun and thought it through, he gained courage. This was just work, his livelihood. He could kill this man; he was a Hindu infidel, an unbeliever. Noor thought of his own Muslim family, of his faithful wife who never questioned his movements, or where the money came from. And he thought of his young son, Waqar. He needed money for his education. He had once had four sons, but three had died of sickness. This had broken his heart and challenged his faith, but in the end he had come through this trial as a stronger Muslim. Waqar had survived through the will of Allah, and he was the light of Noor’s life. He loved him with a tenderness he reserved for no one else. Noor intended to enroll Waqar in the Quranic School and raise him to be a warrior for Mohammad.

Noor Allem visited the businessman’s store and demanded payment. The businessman considered him, looking him up and down with a smirk on his thin lips. Noor was a small man, slightly built. His balding head and wire-rimmed glasses made him seem more like a clerk than a debt collector. Who was he to demand anything? The businessman put back his head and roared with laughter. But as Noor pulled out the gun, the businessman’s attitude changed. He stopped laughing. No longer was he arrogant. As he looked into his face, Noor saw the cold fear in the man’s eyes, and he understood that he held absolute control. This man’s life was completely in his hands. Soon he was on his knees, begging for mercy, but Noor cared nothing for mercy. He was overwhelmed with a sense of power. As he pulled the trigger he felt invincible. He felt powerful. He felt like a god.

Over the next three years, Noor Allem killed seven more men. He was imprisoned in every major prison in Bihar, but was always released. Each time he was set free he was more confident, convinced that Allah was with him. As a boy he had been small and weak and the other boys made sport of bullying and beating him. Drained of self-esteem, he became reclusive, a loner, and eventually turned to petty theft and then robbery. He needed the money, but he needed the sense of achievement more, and this made him bolder in his crime. He began robbing people at knifepoint and he would beat them, and sometimes cut them, even as they handed over their money. He stopped short of killing his victims, but he enjoyed hurting them. The dominance he felt gave him intense satisfaction. Once, Noor Allem tortured a man for hours because he had insulted him. He had made up his mind that no one would insult him ever again. The businessman had laughed at him, and Noor had killed him. It had taken his self-worth to a new level. Now, another seven killings later, he had respect. People feared him and he feared no man.

In November 2010, Noor Allem’s son, Waqar, became ill with intense stomach pain. Soon, he developed a fever. Noor and his wife prayed over him and went to the mosque to beg prayer from the Imam. Over the next few days Waqar’s condition deteriorated. The fever intensified and he would not take food. Noor hated to see his son in pain and he became desperate, seeking help wherever he could find it. He went to the Hindu priest, and even paid money to a witchdoctor. But Waqar was getting worse, so Noor picked him up in his arms, put him in an old car, and drove him 20 miles to the Duncan Hospital. The doctors admitted him immediately, and Noor saw from their concerned faces as they examined him that the situation was serious. He waited three hours while 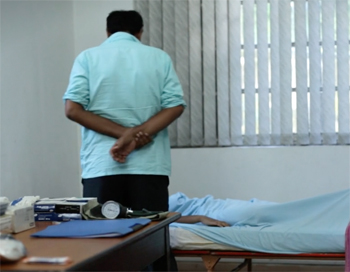 they ran tests, and then they allowed him to sit by his son’s bedside.

Noor looked at his sleeping son, lying still now but very weak, his breathing shallow. He looked pale, like a ghost, like a dead person. But no, Noor was not prepared to even consider the possibility of death. He wrung his hands in despair and wept. Three children he had lost already, the first to typhoid, the second to tuberculosis, and the third to a snake bite. He was not prepared to lose Waqar, his last remaining child. He was only 12. It could not happen.

The doctor came to check on Waqar and he told Noor that it was a parasite. He said it was advanced, there was internal bleeding, and there was little they could do. He said he might die. Noor stared at the doctor, refusing to believe him.

“You don’t know what you’re talking about,” he said, quite calmly. The doctor looked away, then answered as compassionately as he could.

As the hours went by, dark thoughts invaded Noor’s mind as he sat next to his failing son’s bed. Must he lose all his children? Was this a punishment from Allah for all the murders and the torture of others? No, he had been faithful. Allah had granted him power over these infidels. He would regret nothing. His son would not die. He would not allow it. He would kill the whole world if he had to, but Waqar would survive.

When the doctor examined the boy again, he saw that he was failing. He shook his head and turned to the boy’s father, to tell him it was hopeless. But as he turned he found Noor’s face six inches from his own, eyes blazing. He held a knife in his hand.

The doctor saw the knife, but remained calm. “I cannot save your son,” he replied. “It is out of my hands. I am sorry.”

There was something wrong here. It took a few seconds to register, but then Noor understood what it was. This man was not afraid of him. He had threatened with a knife, with death, but he had no fear. He looked peaceful. Noor stared at him, not knowing what to do. The power he always felt in harassing his victims was absent here. He had no control over this man. He slipped the knife back into his pocket and looked at his son.

“Then in whose hands is he?” I have prayed to all the gods.”

The doctor looked at him with great compassion.

“I can’t do anything for your son, but I know someone who can. The Lord Jesus Christ. We can pray to Jesus right now if you wish.”

Noor did know this Jesus, but he nodded. Together, they got down on their knees. As Noor Allem listened to the doctor pray, he was overcome with emotion. This man prayed as if he new his God personally, as if he were alive, right there in the room with them. He prayed for Waqar as if he were his own son, as if he knew and loved him. Noor felt power in his prayer, true power, not the power of a gun, but something much deeper. When it was over they rose, and the doctor turned to him.

“We have asked for healing. Now we must have faith that The Lord will permit it.” He reached into his pocket and pulled out a small book.
“Read this, my brother, and you will understand more.”
Noor took the book and began reading by his son’s bed. The book was a holy book, and told about Jesus. He read for hours, that Jesus was the Son of God, sent by the Father to save all men, all who would believe in him, repent, and follow him. He read that Jesus performed many healings. Jesus said these people had been healed by faith. Noor thought of those he had killed and hurt and he emptied himself of tears as the guilt and shame overwhelmed him. In the early hours of the morning, trembling, Noor got to his knees once more. It was a simple prayer. 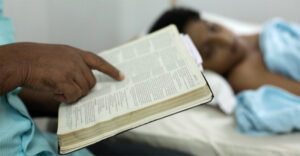 “Lord Jesus. I have faith that you will heal my boy. If you will do this, I will follow you with all my heart, and you will be my God. I beg your forgiveness for the terrible things I have done.”

Waqar’s recovery was remarkable. He was back home within a week. Noor Allem immersed himself in the New Testament, then began proclaiming Jesus in his village. The Muslims could not believe what had happened, but Noor’s testimony was irresistible. His son had been brought back from the brink of death, but even more astounding was that this criminal, this murderer, was now preaching salvation, forgiveness and healing is available through love, the love of Jesus Christ.

Some came to Christ. Then others, and some in the next village. Noor Allem preached at the market and brought many to Christ. Some Muslims challenged him, but no one threatened him; his past was known to all. He met a Big Life church planter, who discipled him and showed him how to begin planting churches. He joined the ministry. They worked together, visiting villages, planting churches. By mid-2012, Noor Allem was known as Pastor Noor. He had brought hundreds to Christ, and had planted churches in many Muslim villages. He was following Christ with all his heart, as he had promised.

To find out more about Big Life, go here