“I’ll retire when the devil retires.” Gary Harthcock faithfully lived out his famous words on four continents and in multiple avenues of service. Longtime International Mission Board worker and volunteer Gary Harthcock, who died Jan. 5 at age 97 in Thailand, served in six countries with his late wife Evelyn who preceded him in death.

“That quote was taped to his desk, and he told me he read it every day. He has truly lived that out,” Kathryn Monroe said. “Retirement was not in his vocabulary.” She and her husband Philip were friends of Harthcock.Friends recalled Harthcock’s watchword upon his death Jan. 5 at age 97 of an abdominal aortic aneurysm.

Harthcock and his wife Evelyn were married 69 years before she passed away in September 2015. They served together overseas for 40 years in six countries.

International Mission Board worker Phil Wardell served with the Harthcocks in Cambodia.

“It was such a blessing to have these ‘grandparents’ join our team, and they were truly a team in every respect of the word in terms of how they ministered together in the city,” Wardell said. “There are very few people that have left such a legacy in missions, as they have given birth to [spiritual] sons and daughters in the Caribbean, Liberia, Guyana, Mongolia, Cambodia, Thailand, and virtually in almost every country where they have visited since they began their marriage.”

Harthcock was born in Clarksdale, Miss., on July 7, 1919. He served as a patrol plane commander in the U.S. Navy during World War II, married Evelyn Dorothy White in 1945 and retired from active military service the next year.

Harthcock used his bachelor of science in agriculture in a number of arenas, including starting a business building greenhouses. He eventually joined the staff at the Baptist State Convention of North Carolina and was later the director of Fruitland Baptist Bible Institute in Hendersonville, N.C.

The Harthcocks began serving with IMB when he was 56 and she was 55, first serving on the island of Antigua in the Caribbean. They developed irrigation systems on several islands and used agriculture to minister to the people. 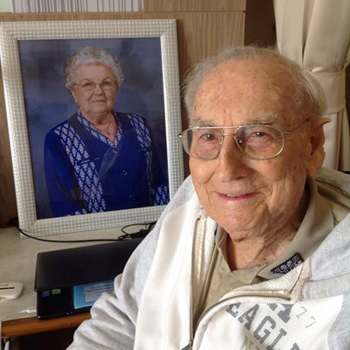 Although they officially retired in 1985, they continued to work alongside the IMB. Centered on loving, serving and showing people Jesus, the couple continued serving through multiple short-term and volunteer mission assignments.

They moved to Liberia in 1986 with IMB’s Master’s Program to continue the ministry efforts of IMB workers who returned to the U.S. for home assignments.

In 1992, the Harthcocks moved to Mongolia to teach English to medical doctors. While serving there, also with IMB’s Master’s Program, the couple wrote 85 lessons on the parts of the human body. These lessons were later published. The couple led 17 Mongolians to the Lord and started a church that was the first Christian church approved by the Mongolian government.

The Harthcocks’ ministry service with IMB continued in Guyana where they served for six months before they relocated to Cambodia in 1996 to teach English to Buddhist monks, as well as doctors, surgeons and medical professionals in hospitals.

The Harthcocks hosted birthday parties for Buddhist monks in their home and served spaghetti, French bread and birthday cake. As the Harthcocks shared the Gospel, several Buddhist monks made decisions to follow Christ and left the monastery, following the Lord in believer’s baptism and joining the church.

As a result of their time teaching English, the Harthcocks developed “Easy English Teaching” tools and wrote 19 booklets for teaching English to Buddhist monks and others, tailoring the publications to expose students to the Gospel.

In 1999 in their late 70s, the Harthcocks moved to Thailand and continued ministering and writing books, Bible lessons and tracts that have since been translated into seven languages and are used worldwide. Gary was 82 and Evelyn was 81 years old when they completed their Master’s Program assignments. The couple continued to serve using their own funds.

In his last days in Chiang Mai, Thailand, Harthcock wrote daily devotionals titled “Spiritual Food” that were emailed to people worldwide. He always addressed the emails to his “lovable worldwide family.”

Philip Monroe, a member of that “worldwide family,” said Harthcock’s life influenced him in several ways.

“First, I am so impressed with his perseverance in ministry. Until the very day he was diagnosed with an aneurysm that would end his life in a few days, he remained faithful in teaching the Bible through daily devotionals he sent to over a hundred people every day,” Monroe said. “Second, only a few months ago, he finished another one of his books that spreads the Gospel through easy-to-read Bible stories in simple English.

“Third, he loved people. During these last days at the hospital, many hospital staff came to his room in tears and hugged him and showed respect for him,” Monroe said. “The consistent incarnational life that he has lived among a lost world has accompanied his continual verbal witness to the life-changing message of the Gospel.”

Harthcock’s life reminds Monroe of 2 Timothy 2:2: “The things which you have heard from me in the presence of many witnesses, entrust these to faithful men who will be able to teach others also.”

“This was Gary,” Monroe said.

Harthcock is survived by his sister Margaret Varnell of Cleveland, Tenn.; his brother Thomas B. Harthcock Sr. of Newton, Miss.; and foster daughter Carmen Fitzsimons of Summerville, S.C.

Memorials, condolences, and tributes can be shared at www.forevermissed.com/gary-harthcock/#about. In lieu of flowers, the family has requested donations in his honor to the Lottie Moon Christmas Offering atwww.imb.org/lottie-moon-christmas-offering.– Baptist Press

Caroline Anderson is a writer for the International Mission Board based in Asia.