As an American astronaut he gained heroic stature when he became the first man to orbit the earth aboard Friendship 7 in 1962. Previously, he won five Distinguished Flying Crosses in World War II, and years later went on to become a U.S. Senator from Ohio.

Perhaps less well known is that he was a man of deep Christian faith. Yesterday, when he left the bounds of earth once more at age 95, he passed into the arms of his Savior, Jesus Christ.

He was one of the pioneering astronauts of the Mercury program at a time when space travel was inherently risky. He said he prayed every day during that time. Those prayers were needed on Glenn’s historic first orbits in space. 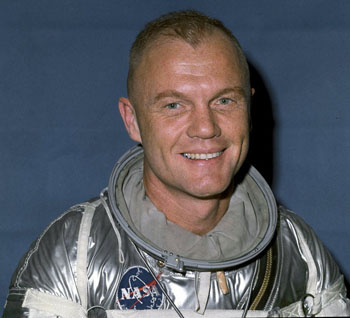 During the return on February 20, 1962, Glenn’s heat shield was thought to have come loose and many believed it might fail during re-entry, which would cause Glenn’s capsule to be incinerated in its fiery descent.

Glenn was instructed to take manual control of the capsule and described “a real fireball outside” as he re-entered the atmosphere. Thankfully, his and many other prayers were answered when he splashed down safely in the Caribbean.

Shortly after his flight, he delivered a sermon, “Why I Know There is a God,” that described his enlarged perspective on God as a result of the mission.

In his message, he marveled at the size of the universe. “Our galaxy is some 100,000 light years in diameter…we realize how difficult it is to visualize the tremendous scale of the universe beyond our solar system. The limits of the telescopically observable universe extend at least two billion light years from us in all directions,” he told his listeners in 1962.

Then he expressed awe at discoveries from the microscopic level. “Come back to what we know of atomic particles, the smallest particles known. Atoms have a great similarity to our solar system in that they have electrons rotating about a nucleus in regular patterns.”

“Now what is the point I am making?” he asked. “It is the orderliness of the whole universe about us, from the 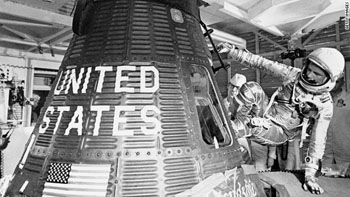 smallest atomic structure to the most enormous thing we can imagine.”

“Could this have just happened? Was it an accident that a bunch of flotsam and jetsam suddenly started making these orbits of their own accord? I can’t believe that. This was a definite plan. This is one big thing in space that shows me there is a God. Some power put all this in orbit and keeps it there.”

In 1998, Glenn returned to space on the Space Shuttle Discovery’s STS-95 mission, becoming, at age 77, the oldest person to travel in space. After that remarkable mission, he told reporters: “Looking at the Earth from this vantage point, looking at this kind of creation and to not believe in God, to me, is impossible. To see (Earth) laid out like that only strengthens my beliefs,” he said.

Related: Encounter with Jesus on the moon left astronaut changed