He gave up his first love — singing R & B — when he rededicated his life to Christ. But after he devoted his music to God he became the random victim of a gang initiation that left him hovering near death, losing nearly half his blood.

After his out-of-body experience, God brought him back to share a message of hope in Jesus Christ.

Tony Davis was one of six children raised in Canton, Mississippi, by a mom who insisted they attend church every Sunday. As a teenager he accepted Jesus as his Savior. After college he began to pursue his dream of becoming an R & B singer one day.

He moved to Hollywood and his group, A Touch Plus, landed a record contract with Warner Brothers. The music scene drew him in with some powerful distractions.

“I began to party hearty,” Tony recalls. “I did the Soul Train dancing stuff. But I knew something was missing. Every time I left a party I felt empty.”

One day, feeling somewhat dejected, he was driving his red 300 ZX on Mulholland Drive, came around a curve too fast and almost went off a cliff.

He pulled over in the dirt next to the edge and lifted up a prayer to God. Thank you God I didn’t go over that cliff. I know I have to change, he mouthed.

To escape the fast lane, Davis moved to Atlanta and began to attend Hopewell Baptist Church. A “fire and brimstone” message pierced his heart and he rededicated his life to Christ.

A few days later, he asked God to remove his desire to sing R & B music.

He heard a voice speak to his heart: Take one step forward.

Standing alone in his apartment, he took one step forward and something surprising happened. All his feelings to sing R & B went away. He shook his head, thinking, What just happened?

He married his wife, Chriselda, in 1995 and began to pursue his new passion, singing Gospel music.

One evening he was on his way to pick up his wife from work at a board and care facility in South Central L.A., when he got a phone call from her.

It seems her friend’s car had broken down, two streets away from the facility where Chriselda worked. Tony found the friend and her children, put them in his jeep, but when he turned the corner and pulled up to the facility, gunfire began to ring out.

“Bullets hit the front of the jeep and one hit my door,” Tony recounts.

Why is this happening? Tony wondered. I don’t have any enemies. I never even held a gun. I’m only about singing.

He punched his foot on the accelerator and sped away from the curb. “I went around the corner as fast as I could. My right tire was flat. I pulled over to the side.”

Then he wondered if his wife had come out of the facility and got caught in any subsequent gunfire. He ran back on foot, and thankfully, she was all right.

When police arrived, they informed them that three people had been killed recently only a few blocks away during a gang initiation. They said Tony probably had been chosen as a random victim — part of the initiation.

The police called a tow truck for his jeep and left to pursue someone they suspected in the attack. They told Tony they would return soon.

Fifteen minutes later a truck pulled up, but then “everything went into slow motion.”

Several gang members emerged from the shadows of nearby trees and began to fire at Davis. The truck driver threw his vehicle in reverse and quickly sped away, leaving Tony alone and exposed.

“I ran toward my jeep,” Tony recounts. “The first bullet hit my leg. I limped until I dropped down beside my jeep.” He felt extreme pain and his pants leg getting wet with blood. He knew he had been shot.

In the next few moments, the shooters sprayed 32 bullets toward him. “Five of those bullets went in and out. There were five shots and 10 holes. Each one went in and out.”

Then the Lord spoke to his heart, Stand up and face your enemy.

With blood draining from his body, Tony managed to lift himself off the ground and saw one young man peering out from behind a tree.

“Why?” Tony called out. “What have I done to you? In the name of Jesus put down the gun!” he declared.

When the gang member heard the name of Jesus his hand began to tremble. “My God what have I done?” the young gang member said. Then he turned and ran.

Tony walked another 10 feet toward a streetlight and collapsed on the ground. Lying in a pool of his own blood, Tony lifted up his hands to God. Why have you deserted me? I can’t believe you let this happen after I dedicated my life to you.

Tony thought he heard legions of demons laughing at him. Then he remembered a Scripture from his mom’s favorite book of the Bible, Job.

“Though he slay me, yet will I will trust him.”

Tony realized God didn’t do this, the devil did it. I trust God’s will for my life, he decided.

Suddenly a woman in white appeared out of nowhere. “I saw here walking toward me. Her hair was black and gray. I couldn’t speak I was so weak.”

She rubbed Tony’s head and said, “My God, what have they done? It is going to be all right,” she told him.

Floating away from his body

Tony felt his heart stop beating and suddenly he had an out of body experience. “I floated up and saw my body lying there. I floated in beautiful white clouds. I began to feel good.

Above the city, there were thousand upon thousands of wings of light, coming from angels praising God over the 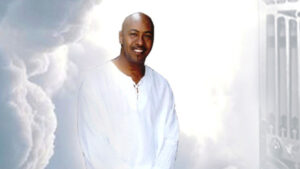 “It was so beautiful, with the light glowing around them,” Tony recalls. “The wings would go in and out of the light. The Holy Spirit spoke to my spirit and said those are archangels who never stop praising God.”

He could hear the sound of rushing waters in the city and could see a yellow glow coming from “the bottom.”

“I couldn’t tell if it was streets,” he says. “I felt love coming from the center of the city. When it touched me it felt like nothing but love.”

Then a voice spoke to his spirit and it said, It is not yet your time. It’s time to go back.

Tony wanted to stay in this beautiful place. “I felt so much peace,” he recalls. “I felt nothing but joy. I felt so free and so good, my pity and shame went away. All of my earthly cares went away. I didn’t worry about anything. I was part of pure love.

Then cloud-like arms began to envelop him. He felt a gentle wind coming from God’s presence, blowing across his face.

A voice spoke to his heart, I need you to go back; your work is not yet done.

A wind from God began to blow Tony backwards through the clouds.

He went back into his body, now on a table at Los Angeles County-USC Medical Center. Physicians had worked on Tony during seven hours of surgery at the trauma center.

They informed Tony’s wife, Chriselda that “he died on the table.”

But then Tony shocked everyone when he took a deep breath and opened his eyes as a doctor was laying a sheet over him. He had been dead for 30 minutes.

When the doctor saw Tony open his eyes he screamed and ran out of the room.

Tony’s medical records confirm he was admitted to L.A. County-USC Medical Center, underwent surgery, and suffered five gunshot wounds. The records do not mention his supernatural, out-of-body experience with God or that he was declared dead and returned to life.

The day after Tony awakened, doctors informed him they would have to amputate his leg. Also, during his emergency tracheotomy they accidentally cut a vocal chord in his throat. He might never speak or sing again.

As they prepared Tony for the amputation, he began to question God once more.

Why has this happened? I’m not a bad person.

Then he felt God speak to his heart once more: There is something I want you to do.

Are you kidding me? Look what they did to me. What kind of God are you? You sit up there and allowed this to happen to me.

If you forgive I’ll make you whole.

Tony wrestled with God for a moment before he reached a decision. “I let go of it,” he recounts. “I pushed away the hurt and anger and shame, the ‘why me’ attitude.

All of a sudden Tony felt the room get warm. A warm sensation touched him and it went from his leg up to his vocal chords. God’s healing touch was making everything right in his body.

When he opened his eyes he saw doctors standing around him, talking about how they were going to take off his leg.

Then he moved his “dead” leg in an unexpected way. “Oh my goodness!” one of them exclaimed. 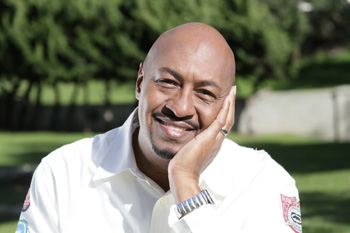 They rushed Tony in for an x-ray and came back with startled expressions.

“There is life in your leg! We don’t know what’s going on,” one said, shaking his head.

Tony closed his eyes, and murmured, “thank you God,” quietly.

The next day one of the physicians came in and said, “Strange things are happening in your room. We’re going to remove this tube from your throat and see if you can breathe or speak.”

When the tube was removed Tony took a deep breath.

“Say one word,” the doctor suggested.

“Jesus,” Tony managed, in a hoarse, somewhat weak voice, above a whisper.

Doctors sewed up the hole in his throat and he’s been talking ever since. “I can sing, I can jump on my leg,” he says.

Tony believes God has given him a mission to share about the power of forgiveness and triumph over tragedy.

“Heaven is a place Jesus prepared for us,” he says. You won’t get there if you’re not saved by Jesus. You can’t enter in without Him. He is the one who came to save us.”

For more about Tony’s ministry, go to www.tonydavisministries.org