In 1986, Jeanette Chaffee was on the last leg of a trip from Salem, Oregon, to Athens when a bomb hidden in the life vest under seat 10F exploded over Argos, Greece. Jeanette was sitting just 14 feet away when the bomb detonated, tearing away the inside ceiling.  It blew a 9’ x 3’ hole in the side of the plane two rows from her.

Five passengers were instantly sucked out the hole and seven others were injured by shrapnel as the cabin suffered a rapid decompression.

“I was jolted awake by an ear-splitting, thunderous boom. It felt like a gun had been shot inches from my head. We were falling out of the sky,” Jeanette recalls.

Turning to her right, she saw blue sky through a large hole in the side of the plane. Jeanette thought, This is our coffin. There’s no getting off an airplane, but she kept praying that the Lord would miraculously save their lives. “I knew Jesus was sitting with me in seat 8A. I also knew the next time I blinked, I would see Him eye-to-eye.”

She experienced the peace of God that passes all understanding that the Bible talks about in Philippians 4:7.

Jeanette prayed for a miracle and got one. It is the only time in history that passengers have survived after a bomb exploded aboard a commercial plane in the air.

Understandably, this event would change Jeanette’s life forever. She believes that she was left to tell others. She said, “No guarantees of life exist. I want to share with everyone that now is the time to personally accept Jesus as Savior.”

With her book Extravagant Graces: 23 Inspiring Stories of Facing Impossible Odds, in which Jeanette shares her 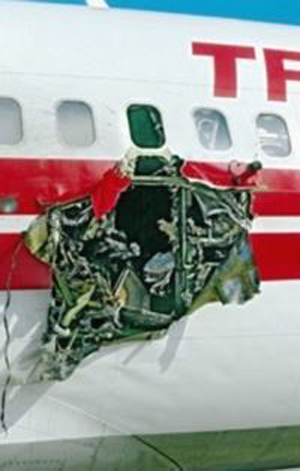 harrowing experience on TWA Flight 840, she inspires readers to trust in God during tough times by sharing the true stories of world-renowned musicians, missionaries, athletes, and speakers who survived the most distressing personal trials – with help from the Lord.

The common theme is real people challenged by murder and cancer, drug addiction, and the loss of home and possessions, and how these people were able to face these impossible odds with God’s power. The book is a compilation of over 35 years’ of Jeanette’s personal interview of some of the most inspiring and influential people of our time, gathering a fantastic collection of intimate testimonials, many of which have been included in her book. These include the Happy Days singers, Shirley Dobson, and Anne Graham Lotz.

Jeanette had the privilege of meeting Captain Richard Petersen, captain of TWA Flight 840 in 2015, near Tampa, Florida, some 29 years after the bombing.  They talked together for five hours.

“Captain Petersen told me that his first words to the Athens air traffic control tower [after the bomb went off] were: ‘Explosive detonation.’ He told me that he always flew his planes…never on cruise control, adding, ‘I fly my airplanes. I love to fly.’ He also told me that the 727 was only plane he flew for thirty years prior to the TWA Flight 840 bombing and despite what happened, he continued flying for another five years before retiring.” 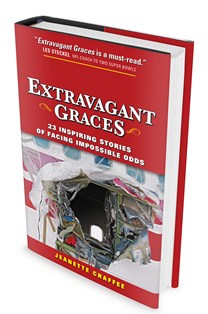 Jeanette then heard from the courageous captain what was happening in the cockpit, after he announced the problem to the control tower. He said that he “took control of the sky,” and then checked out parts of the plane to see if there was any way they could land.

She added, “He also told me that Athens emergency facilities were on strike that day. I was shocked and I said that I saw the fire engines, police, and ambulances out my window. So I asked him, ‘Who was driving them?” He replied, “Anybody!” After we landed in Athens, he even left the cockpit and came back to help get a badly injured passenger on the stretcher.

“Captain Petersen said that his was on the only commercial plane that’s had a bomb explode midair and anyone survived. “During out meeting, he showed me an exact (specially designed to be so) replica of a TWA 727, the only plane he flew for almost 30 years before ever needing to use his expertise on Flight 840 when the bomb exploded. This model and touching words included were his retirement gift from his children. I’m the only passenger (according to his wife) that he’s ever talked to…I was so honored.”

A re-enactment of Jeanette’s own story, “Terror in the Sky” has been aired this year on the international TV

program Turning Point, produced by the Christian Broadcasting Network (CBN). It can be viewed online (http://turningpointzone.com/jeanette-chaffee-terror-in-the-sky/).

Jeanette Chaffee has appeared on CBS Evening News, 20/20, The 700 Club, and other television and radio shows. Jeanette has been quoted in Newsweek, The New York Times, and USA Today. She also hosted and produced Reflections, a fifteen-minute weekly radio show that aired in cities from South Carolina to the Arctic Circle. Recognized as a gifted communicator, Jeanette changes lives by offering God’s hope to audiences going through their most difficult personal challenges. She regularly speaks at community and church events, schools, women’s groups and clubs. She has written diverse national magazine articles and has been a published author for over fifty years.

To follow Jeanette on social media for her speaking engagements, book signings, and special discounts on her books (Twitter.com/JeanetteChaffee or Facebook.com/Chaffee.Jeanette). Learn more about her story on her website (http://www.jeanettechaffee.com/).