After lying naked and cold in a morgue for two days, Sabina saw herself hopelessly stuck at the bottom of a deep well.

Surrounded by corpses covered with linen sheets, Sabina had a vision of a tree growing at the top of the well. From its trunk, a branch moved toward her as she lay on a hospital gurney. Close enough to reach, the branch changed into flesh as Sabina heard the words, “If you grab onto my hand, I will bring you back to life.”

Taking hold of it with her cold, lifeless hand, Sabina woke to find her body covered from the neck down with a white sheet like other corpses around her.

Hearing voices of doctors in search of a cadaver, Sabina sat up on the frigid metal surface below her body.

“I’m alive. Don’t worry,” she shouted as doctors entered the morgue a second time after running out scared moments before.

Offering Sabina water, food and clothes, the medical staff arranged to transport her to a university research hospital in Moscow, Russia, where she had traveled to visit a son imprisoned on trumped up charges.

Baffled hospital personnel refused to officially or publicly comment after Sabina spent two days in a coma and two more in the morgue.

Returning to Central Asia, Sabina surprised family members on her first Sunday morning at home by leaving early, telling her stunned daughters: “There’s somewhere I have to go.”

A Pentecostal church in a largely Islamic community was Sabina’s destination. Inside, she professed faith in Jesus Christ, leaving behind her Muslim faith.

Since then, Sabina’s six daughters and another son (the other died inside a Russian prison where he suffered injuries and brain damage) became Christians and entered full-time ministry or, at least, are studying the Bible.

At 63 years of age, Sabina saw her 92-year-old mother and a niece come to faith in Jesus last year, demonstrating that entire household salvation exists even among Muslims. It was two of Sabina’s daughters who led their grandmother and cousin to the Lord.

In a big surprise, Sabina’s oldest daughter recently came to know Jesus as well. Until the summer of 2016, she was vehemently opposed to the gospel and even having a Bible in her home.

Sabina shares her life-from-the-dead experience and testimony of conversion from Islam to Christianity in her native language within the Central Asian country she calls home.

A spiritual vision brought Sabina back from the dead and another vision — this one by her future son-in-law – drew him to the country where he now ministers with Sabina’s daughter as full-time missionaries.

Family members agreed to share their testimonies of Christian faith with conditions that real names, ministry title and precise locations in the Middle East and Central Asia were not be published. 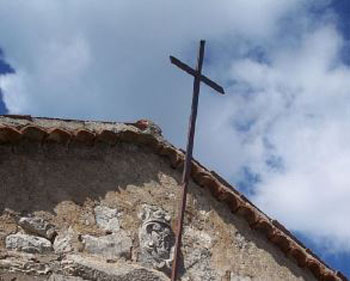 Sabina’s son-in-law, Jamal, a Westerner who spent time in the Middle East as a young boy, had a vision the same year his future mother-in-law walked out of the morgue and into a Pentecostal church.

“God called me to (the Middle East) in 2000 when I had a vision of myself preaching the gospel on the steps of a mosque,” says Jamal who, as a youngster, disliked the country where he ministers today with his wife, Aisha.

They met at a world missions meeting in 2006 and married afterward, discovering that Jamal’s spiritual vision corresponded with Aisha’s heart for people in the same Islamic country in the Middle East, despite her upbringing in Central Asia.

Jamal and Aisha find that Sabina’s death and resurrection story provides an open door for them to talk about Jesus with their Muslim friends and neighbors because it’s emotional and powerful.

“The first day I was a university student, a classmate in our online group asked me if my wife was Muslim.

“I shared my mother-in-law’s story briefly and, as a result of their openness to it, the students’ interest in the gospel made it easier for me to share two days later with a group of about 30 Muslims,” says Jamal.

Before Jamal married Aisha, he ministered to his best friend, a Muslim, by telling him a simple gospel message. Upon sharing Jesus’ love for him, Jamal says his friend began to have dreams and visions and, within a month, he gave his heart to the Savior.

“When we prayed together he began to weep,” says Jamal. “After settling himself, he told me, ‘Jamal, I just saw Jesus again. This time he had his arms open wide, welcoming me home,’”

The next day Jamal’s friend was in tears again because his Muslim wife threatened divorce from her husband for his conversion from Islam.

After praying for his wife, both of them were baptized three months later.

More recently, Jamal and Aisha have been reading the Bible with Abdul, who they’ve known for several years. When they shared the gospel with Abdul, he ended the relationship.

“He texted me recently, asking if we could get together, so Aisha and I had Abdul and his wife over.

“During the course of the evening, Abdul pulled me aside and said, ‘Jesus really did die on the cross, didn’t he?’” says Jamal.

Abdul is now sharing Jesus with his co-workers, one of whom is interested in reading the Bible with the group Jamal and Aisha lead.

“Just recently, we got to go over to Abdul’s house and pray over it,” Jamal says.

Besides a vision in 2000, Jamal says his call to the Middle East was confirmed in 2003 when he heard God speak to him at a conference, indicating which missions group to partner with.

“I had never heard the name before, so I was kind of puzzled when I heard God’s words.

“Five minutes later, the main speaker introduced himself and the organization’s name I had just heard God speak.

“I literally went to the back of the room that night and applied for (the organization’s) training school,” says Jamal.

Two of Aisha’s sisters and their husbands are part of the same global missions’ organization to which she and Jamal belong. It encourages Bible studies among friends and neighbors in homes or churches planted by indigenous leaders.

The vision is based on the Apostle Paul’s words in Romans 15:20: “And thus I aspired to preach the gospel, not

where Christ was already named, so that I would not build on another man’s foundation.” (NASB).

Jamal and Aisha are team leaders of seven adults and five children. The team has formed two house churches in another province and, over the summer of 2016, it planted seven churches among unreached and unengaged people.

Some team members, including Aisha, are ministering to Syrian refugees, which total almost one million registered and unregistered people in just one of the Middle Eastern countries hosting them, making it impossible to reach everybody without help from established churches.

“Last year we adopted an entire refugee camp before winter set in because many babies and toddlers die from the cold. We raised enough money to pay for heat and insulation in their tents,” Jamal says.

Aisha requests prayer for her work with Syrian refugees, other partners to join them, unrest in the Middle East, the love of Jesus to be revealed to friends and neighbors, university ministry, travel and health for five children of team members, two of whom belong to her and Jamal.

Steve Rees is a freelance Christian journalist who loves the church and writes about how it engages the culture and works toward fulfilling the Great Commission. He lives in Longmont, Colo. and attends Resurrection Fellowship, a nondenominational, missions-driven church that honors all the gifts of the Holy Spirit and the five-fold ministry offices. The church is in Loveland, Colo. Rees formerly worked as a newspaper reporter and was among the first journalists who wrote about Promise Keepers before it spread nationwide from Boulder, Colo. This story originally appeared on ASSIST News. Rees can be contacted by e-mail at steverees@peoplepc.com.