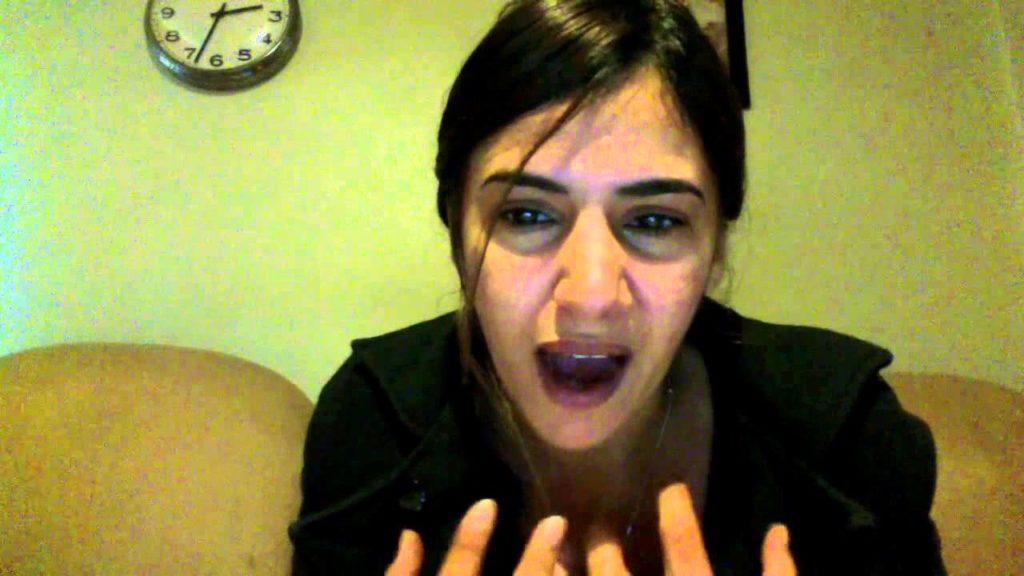 Her own dad paid a hitman to behead her.

Maz looked for the right words to tell her dad, a staunch Muslim, that she had converted to Christ.

“It was so hard to forgive (my dad),” Maz said in her YouTube video testimony. “It was so heart-breaking to know that your own dad would do something like that.”

For much of Islam’s existence, the death penalty was the preferred punishment for “apostates,” and some hardliners still adhere to that iron-handed brand of justice.

Maz grew up in the UK under a strict and even abusive form of Islam until she ran away. Her sister, then a minor, was placed in foster care by the Department of Community Services, and for a time was under Maz’s care.

But the abuse is not what drove her to Christ. It was the demons.

“I’d be waking up in the middle of the night, and I’d feel like there was someone there choking me. I couldn’t breathe, she said. “Or I’d feel like someone there was stabbing me with a knife. I’d feel the pain – all sorts of paranormal activities that you can think of: doors slamming at night, I’d hear someone breathing next to me. It was absolutely terrifying.”

After she could stand it no longer, she sought help from people of every walk of life – but none could help her. She even called a sheikh. But then she spoke to a Christian friend, who brought a man practiced in spiritual warfare.

Confronted with the undeniable power of Jesus’ name, she began to attend Bible study to learn more about Jesus, but for her Islam-inculcated mind the gospel didn’t make much sense – especially the crucifixion of Jesus Christ.

“How could God die?” she asked. “It was like a foreign language for me. I didn’t understand what it was all about.”

Whenever the demons returned, she would rebuke them in Jesus name and find tranquility. But one day she came home to find her sister in complete terror, and it took hours to convince her to explain. The demons had threatened that if the Christian man ever returned, they would exact revenge on Maz and her sister.

It was midnight, but Maz didn’t hesitate or doubt. She called her Christian friend, and he came and prayed immediately. “I knew the demons were terrified of Jesus.”

She also decided to get baptized forthwith in her bathtub.

Still for weeks and months, the confusion persisted. She battled with questions about the differences between Islam and Christianity and decided to reject neither but use Jesus’ name to maintain the upper hand over the demonic oppression. 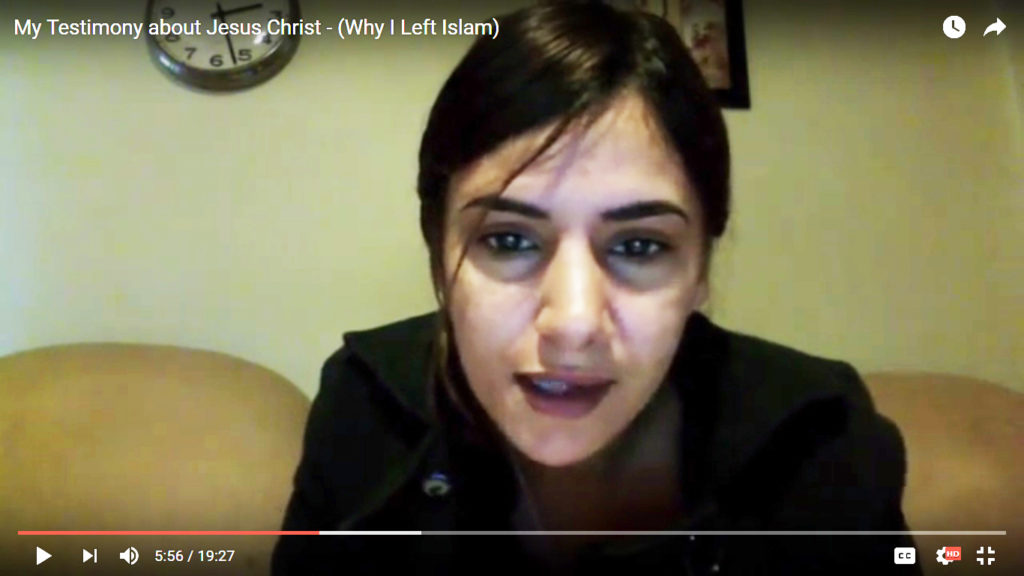 That’s when she sustained a time of “tribulation.” She lost her job, her house and her sister. She was riddled with pain in her heart. “It was hell on earth,” she said.

Feeling at rope’s end, she resolved to commit suicide to stop the hurting. On the selected day, she was headed to the park to get drunk to carry out her plan, but a spiritual presence opposed her.

“I felt like this invisible power stopped me there,” she said. “There was someone there stopping me and sort of pulled my face and look at the direction that I saw a church.”

She went in. It was a Korean church. She didn’t understand a word but felt Jesus was speaking to her. After 10 minutes, she left.

As she walked back home, she argued, screaming to the skies, with Jesus.

“I don’t think You can help me. The glass is already broken,” she said to Christ. “I walked home and got very angry. I was screaming at Him. I asked him How could You say You’re my Father and sit there and do nothing? You say You were crucified for me, but I feel like I’m being crucified right now. I said a lot of hurtful things to Him.”

At home, she dropped to her knees. “Listen Jesus, I don’t know who you really are,” she said. “All I know is that every time I call on You, You help me. Please take this pain away from me.”

She fell asleep and in her dream, she was running and running in an endless darkness. She screamed, “Jesus! Jesus!”

A voice at her ear responded. “You don’t have to scream. I can hear you.”

“When I turned around, there was Jesus Christ standing right next to me.” she said. “I was looking at Him. There’s this authority, this majesty, this power standing next to me, and He’s looking at me, and He says, ‘There’s no need for screaming. Even if you call me in your heart, I’ll be there.’

“He takes my hand and takes me out of that darkness,” she said. “He takes me into this place where there’s these amazing lights that I had to cover my eyes and put my hands over my face because I couldn’t see anything because of the brightness.”

She woke up in a state of awe.

“There is this beautiful thing when you see Jesus Christ, that amazing love that you feel coming out of Him. You know He loves you. You just feel it. At the same time, He is so powerful. When I had the dream, I understood that God cares for me.”

Two days later, her father called. Though her relationship was problematic, still he was her father, and she longed to tell him about her conversion.

I don’t care if I die being poisoned, just not being beheaded.

I don’t care if I die being poisoned, just not being beheaded.

“I was really really scared. I didn’t know how to word it,” she said. “All I said to my dad was, ‘Dad I went to church because it’s Easter and people give chocolate.’”

Her dad’s response seemed positive. “Listen darling, I know you’ve become a Christian, and I love you with all my heart. No matter what you do, I’ll support you,” she remembered. “He was crying. He said, ‘I just want to see you sweetheart.’ My heart broke.”

Dad lived 20 minutes away, but that familiar spiritual force wouldn’t let her go.

That night she dreamed her mother died and her dad paid for her murder.

“When I woke up, I thought I was hallucinating,”

But then she got a text message. Her mom had died.

Two days later, the police brought her to the station. They had evidence that her father was trying to kill her.

“It was exactly matching my dream.” she marveled. She thanked the Lord for His protection.

But then because of the proximity, she worried about a future attempt on her life.

She broke down crying before the Lord and prayed.

“I don’t care if they kill me because I know who You are,” she prayed to Christ. “You’re the real deal, and You love me. I just want to ask You a favor: Can You please change the way out? They want to kill me. Can You give me a peaceful death? I don’t mind dying with a bullet in my head. I don’t mind dying getting run over by a car. I don’t care if I die being poisoned, just not being beheaded. Please, Lord, that’s all I ask of You.”

Jesus responded with a verse from the Psalms: “He who dwells in the shelter of the Most High shall abide in the shadow of the Almighty.”

Christ would be her safety, but would she have to move far away?

“I had to make a choice to either sit there and be really scared and run away or stay where I was and not fear,” Maz said. “I made the decision to not fear death because Jesus says, ‘I will protect you.’ And He did. Months went by, and no one dares to come near me.”

That’s how she resolved the mystery of the crucifixion. Her earthly father had tried to kill her. Her heavenly Father sent his Son Jesus to die for her.

“It was at that moment when I saw my own father paying someone to kill me that then I believed that Jesus died for me,” she said. “My real Father died for me. My real father is not the one who was trying to kill me.”

“Now I believe with all my heart that Jesus Christ is my Lord and Savior,” Maz said. “I can’t thank God enough for everything He’s done for me. He taught me how to trust Him, I mean. I really, really trust in Him. No matter who you are, no matter where you’re from, no matter how much bad you’ve done, the moment you call on Him, He will come to you. I pray everyone experiences the love of the living God because it’s the best thing.”

Muslim woman dreams about ‘Man in White’ with bleeding feet

Muslim woman became first in her village to follow Jesus