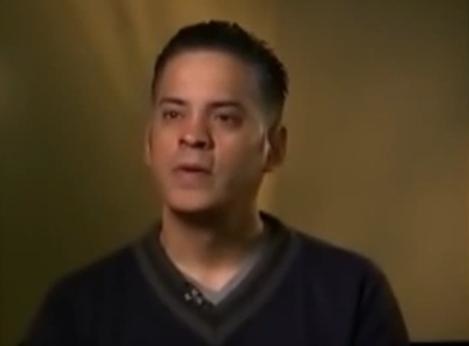 As a high priest of Santería, John Ramirez knew he was destined to join the five main demons of Santería in Hell. But he didn’t care. While he lived, he was respected and feared as a powerful witch in his South Bronx neighborhood.

Born in a family steeped in witchcraft, John was consecrated at an early age under demonic threat at a tarot card reading. If his parents did not dedicate him to Santeria, they were warned he would be blinded. Dutifully, his mother placed him a bath of herbs and performed the required chants.

Afterward, “my whole personality — what I stood for, what I was — was no longer there,” John said in a YouTube video. “I felt like someone put a black blanket right over me. I wasn’t answering only to my mom and my dad, I was answering to the demons.”

He trained under the tutelage of high-ranking devil worshipers. He skulked into funerals to “capture” the dead body’s spirit and use it to kill others by the same death. He scrambled to collect the blood of drug dealers killed on the street to perform Satanic rites.

“People knew that I was force to be reckoned with,” he said. “I liked that power. I was talked down to as a young boy. Now I had the power and the authority to do whatever I wanted.”

When John was 13, his father died in a bar brawl. Since dad was physically and emotionally abusive, John saw his death not as a tragedy but as a relief to his mom.

“As a young kid, I called out to God to help my mother” when dad was beating her, he said. “And no one showed up. But the devil showed up because he killed my dad. I believe the devil said, ‘No one loves you, but I love you. Your father can’t provide for you, but I’m you’re provider. I’ll give you anything you want. Just ask.'”

Santería is a Caribbean form of witchcraft with roots in Africa. It involves drinking alcohol, dressing in white, performing rituals with red candles and human blood. John took his practices outside his apartment and, for reasons he couldn’t explain, targeted especially Christians.

“At the clubs, I’d go around looking for Christians,” he said.” At the club, I knew, you were in the devil’s playground. So I knew that if I could get to you and you had a beer or two already in your system, I would say, ‘I have something to tell you today.’ You would say, ‘What do you have to tell me?’ You opened the door; you gave me gateway.”

He scaled up in the ranks of palo mayombe, a branch of santería, gaining more and more power. He waged spiritual warfare on behalf of Satan in his neighborhood.

But he noticed that sometimes his curses when ineffectual — when in the spirit he saw people praying. The curses were not effective when people prayed! That neighborhood was sanctified, blessed through prayer. He and his evil minions couldn’t touch it. “But in the other neighborhoods, it was party time,” he said.

When he was 25 years old, John met a pretty girl and started to feel something for her. She invited him to church and to her home, where her parents talked to him about Jesus.

“They had the Bible out, ‘Hey, listen, we want to talk to you about this.’ I’m like, ‘Well, I can’t come to your house anymore. Your parents are crazy,’” John said. “And I said, ‘At least let me digest the food, and then you can talk about this Jesus guy.’ And then after I leave her I would go to worship at the devil church and kill animals all night long, and then I would come back and see her, but she didn’t know.”

When he agreed to attend church services, he regarded Christians as amusing and harmless. “We had a different system than they had. They’re stuff was just kisses; ‘Hallelujah, we love you,’ John remembered. “So I kept coming to church to please her, but I wasn’t going to leave the people I was committed to.”

One Sunday morning, the pastor gave an altar call. John went forward. “All of a sudden, I got demon possessed. I grabbed the pastor by the throat, picked him up in the air and said, ‘I came for you.’ And all these big men came out of their seats, tried to grab me. I was just throwing people around like rag dolls,” John said.

“And then 200-and-some people got up and raised their hands (exercising) spiritual warfare for a person that would have killed them in a heartbeat. I saw the power of God in that church. One of the guys was whispering back in my ear, ‘Say, Jesus is Lord.’ Say, ‘Jesus is Lord.’ Say it. Say it.’ I couldn’t open my mouth. And then suddenly I was able to say, ‘Jesus is Lord.’ And the devil left.”

Of course, his aggression against the pastor more than flustered him. He was loathe to go back to that church.

Then a few days later, an elder gave him a gift — a sweatshirt that read “You’re a warrior for Christ.” The gesture of kindness, forgiveness and love impacted John profoundly. “It was amazing,” he said. I couldn’t believe that Jesus loved me.”

John didn’t know how to pray, repent or undo his pacts with Satan. Despairing and lacking guidance, John decided to commit suicide. “I said, ‘Lord Jesus can’t have me. The devil can’t have me. The best way out is suicide,'” he said. “In my ignorance, in my shame, in my confusion, I thought I was so far gone. I was spiritually drained.”

With the gun in his hand, he began to talk to God.

“I don’t know what they call You, Jesus. Whatever they call You in church, I don’t like You. I never liked You. I never had nothing to do with You. I want no dealings with You. I hate You. I don’t want to be part of You. I never want to be a Christian. I disown You. If that’s going to get You away from me. I will worship the devil till the day I die.’ And I whispered, ‘But if You are bigger than the god that I serve, then You show me tonight or leave me alone.’”

Afterward, he fell asleep and dreamed he was on a racing subway packed with people. He didn’t know where the subway was headed, but he sensed it was evil.

“There was a lady dressed very elegant and she started talking to me in a demonic tongue. I understood the tongue: ‘Traitor! You’re leaving us.’ So I tried to get into the middle of the train, in the middle of the people so she couldn’t reach me and then – pop, hit – and the doors opened. I ended up in hell.”

Into dark realms with unearthly heat and utter hopelessness he stepped – and then Satan appeared to him.

“I’ve been with you when you were nine years old,” the devil told him. “I’ve been a father to you. I’ve given you everything. I’m going to keep you here, because if I can keep you here, you won’t wake up upstairs,’ which is on earth. You belong to me. You’re not going to leave. You know too many secrets of my religion.”

But as Satan reached to grab him, a cross suddenly appeared in John’s hands. And when he went to grab me, to snuff me, this three-foot cross appeared in my hands.

“I put it on the devil. And he felt like nothing. He felt like he was a baby, no powers, at the foot of the cross.”

John woke up freed from Satan and transformed. “I knew that Jesus is Lord. I bend my knee to the cross, and Jesus came into my life,” John said. He ditched his satanic paraphernalia. But still he felt spiritual attack nightly for a month.

“At night, I felt a presence come into the room,” John recalled. “And then when I would turn around, I would actually sometimes see what was there. Or sometimes I would somehow fall asleep up this way and I’d feel someone’s hands just grab me by my throat and try to pick me off the bed and try to rip my soul out of my body.

“Sometimes they’d grab me by my feet and the bed would shake, and they would bring it up and levitate the bed and levitate me to the point that sometimes I even reached the ceiling,” he said. “And I couldn’t breathe; I couldn’t cry out. I couldn’t talk. I felt like I was choking; I felt like they were choking the life out of me. And I would try to call out for Jesus, and the words wouldn’t come out and then in the end the words would come out, ‘Jesus, help me. Jesus, help me. Save me.’ And it would go away.”

John was perplexed by the extended battle for his soul. Why didn’t Jesus deliver him quickly? He felt the answer some eventually: “I wanted to know how much you loved Me, how much you trust Me.”

With that, he was delivered from satanic attack. “No devil ever showed up to my house ever again.”

“I count that all to be foolish to gain Christ. He’s my Uno. He’s the breath that I breathe. He walks with me. I can hear the sound of His voice in my ear.”

Today, John shares the gospel with everyone he can. He has written a book about his experiences called Out of the Devil’s Cauldron.

“I’ve been victorious in Christ,” John said. “I’ve got peace. I’m not empty anymore. I’ve got fulfillment. I’ve got a purpose and I have a destiny today, and all because I said ‘yes’ to the cross.” Today, John is an evangelist based in New York.