After his father was murdered his mother slid into drug addiction. In and out of shelters and foster care, he received the Lord at six-years-old and immediately began preaching the gospel.

“Dad was an auto mechanic and ran his own business,” says Bryce Popken.

“Mom was a beautiful model and it was love at first sight,” he recalls. “But dad had a problem with alcohol that consumed his life.”

When Bryce was 18-months-old his father and a friend got drunk, belligerent with one another, and began to argue over a property line. “One thing led to another and my dad’s best friend shot him eight times with a shotgun.”

Bryce’s mother “went off the deep end,” and became mired in addiction. She lacked discernment regarding men and often attached herself to other addicts or drug dealers with abusive tendencies.

“My little sister was in the arms of my mother and a guy knocked my mom’s teeth out. That same guy was doing drugs. My mom tried to get clean, tried to get us into a shelter. She tried her best to take care of me. I could tell she had a problem.”

Poor choices caused a downward spiral of impoverishment. “I remember being a little kid and not having food in the cupboards, no pillows or blankets to sleep with, just a dirty sheet at the motel.”

“Sometimes we slept in cars, mostly motel hopping. It was a different place every week or month. It depended on how well mom did with panhandling or her boyfriend’s drug deals,” he recounts.

His mother sometimes used Bryce as a prop to ask people for money at gas stations.

One day Bryce went to the beach with his mom and her boyfriend. When it was time to leave, the boyfriend asked Bryce to rinse off in the water, but at five-years-old, Bryce had a fear of being sucked out by the waves and refused.

“When you get home you’ll be in trouble,” the boyfriend warned Bryce.

When they got home, the boyfriend directed Bryce’s mother to put makeup on him and children’s diapers.

“He had my friends come and look at me and make fun of me,” Bryce says. The painful humiliation damaged him severely. “It was painful. I cried and cried for about a week. I was devastated.” After that the boyfriend called him “Sheila.”

But God saw Bryce in his heartbreaking condition and sent a ministry of rescue. Angels for Christ, a ministry started by Don and Carol Waisenan, did an outreach to poor children one morning at the low-end Firestation Motel where Bryce and his mother were staying.

“There weren’t many kids out that day. I was the only one who showed up,” Bryce recalls. “They encouraged me, talked about Jesus. I asked if they could pray for my mom.”

They told Bryce about the Ten Commandments. They took him through John 3 and spoke to him about Jesus’ death and resurrection, and explained the Gospel message in simple terms. The power of the Word and the Spirit opened Bryce’s heart to believe.

“I prayed a prayer of salvation,” Bryce says. “I got filled with the Holy Spirit and started speaking in tongues. Everyone looked at amazement. I was six years old.”

The change in his life was immediate. “It impacted me. I was so used to being told I was worthless by my mom’s abusive boyfriend.”

For the next year, Don and Carol picked up Bryce weekly to take him to church. “It was a safe haven for me, a place where I wouldn’t get beaten, where I would be cared for and fed. I loved that,” he recalls.

Bryce began sharing with other kids at the motel about the Bible verses he learned and earned the nickname, “The Little Preacher.”

He was amazed at how “God could use a kid like me, not knowing much of anything, just pouring out his spirit.”

One day there was a drug raid at the motel and Bryce was taken away after his mother and her boyfriend were arrested. “After that my life changed considerably,” he says.

He spent the next three years with child protective services. “I went from home to home, wondering where I would land, a place to call my own. I lost all contact with Angels for Christ,” he says.

One of the miracles for Bryce in the foster care system is that he always landed in Christian homes. Not only was he treated in a kind and loving way, his foster parents took him to church.

“In the foster care home I got comfortable, felt like I belonged, I was going to Saddleback Church, going to kid’s classes, reading the Bible. I finally felt like I had a semblance of a happy family and then I got the news that my mom had worked out something and I would be adopted back into my family.”

Bryce went to live with his aunt and uncle in Lake Elsinore. At first, he felt like he was in seventh heaven. “I was with my family. I could have contact with my mom on the phone or visits on my birthday.”

But the weight of his inner wounds began to manifest. “I struggled with depression because of all the things I had gone through. I remember I got so sick of it one day, I thought nobody would notice if I disappeared. I didn’t want to be a problem to anybody. I tried to kill myself by putting a shopping bag over my head.”

Fortunately, his uncle found him before he lost consciousness. “What are you doing?” his uncle cried out, pulling the bag off his head. “You could have killed yourself!”

After his aunt and uncle decided they didn’t want to care for Bryce any longer he was shipped off to another relative, Uncle Jason.

“He has been a lifelong bachelor. He was that father figure and male role model I really craved and didn’t have. He took me to church and he wasn’t really a Christian.” His uncle took Bryce to Harvest Christian Fellowship in Riverside, California, led by Greg Laurie.

Uncle Jason owned a plumbing company and also invested in real estate on the side. At one point he owned 13 houses, a 40-foot boat, and luxury cars. Bryce was driving to school in a Lamborghini. “I went from the pit to the palace after being adopted by my uncle,” Bryce says.

His uncle also invited Bryce’s mother to live with them, along with a registered nurse, to help her overcome her addiction. “He gave her a job making calls for his company, he co-signed for her to help her get an apartment. She did great for a while but threw it away for the drug-dealing boyfriend,” Bryce laments.

While it was painful to see his mother relapse, this brief moment allowed something important to happen. “It allowed me to forgive her boyfriend; it was a Holy Spirit orchestrated moment, to get free of the hatred I held. He was more of a prisoner than I was. Why shouldn’t I extend the mercy to him that I also received from God?”

Then his uncle made the mistake of getting involved with a married woman, and the 2008 financial crisis hit. “He lost all 13 houses, all the cars. The Lord spared his business. If you sow to the wind, you reap the whirlwind. We went through the whole thing together.”

He moved to Corona and started attending Crossroads Christian Church. Because of his love of preaching, he

started to think about joining the military and becoming a chaplain.

“After three years of ROTC, God said I had the wrong army.”

“Is it the Air Force or Marines or Special Forces?” he asked God.

“No, you’re in the wrong army,” the Lord impressed on his heart, along with Ephesians 6 and the message that his battles would not be against flesh and blood.

When he was 19, a woman at Crossroad Christian Church, Dorothy Ray, pulled Bryce aside and said the Lord has been putting on her heart that Bryce is called to ministry.

“I know a couple you could get in touch with who do ministry,” she said. 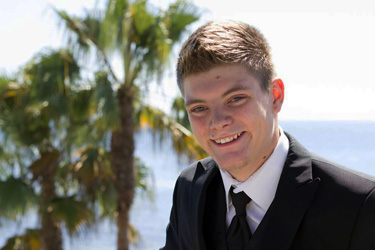 Then she brought up Don and Carol Waisenan with Angels for Christ, the same ones who led him to the Lord when he was a child!

“God is such an awesome orchestrator and caused everything to come full circle,” he says.

The next day he called Don and Carol. “I don’t know if you remember me…” he began.

“We never forgot you!” they exclaimed.

God never forgot, either, and guided the remarkable reunion between Bryce and his “spiritual parents.” He was ordained in May 2014 as an associate pastor and is currently serving with Don and Carol at Solid Rock Restoration Church in Riverside, California.