She earned the nickname of ‘Moses’ because she led so many of her people from bondage in the house of slavery to the promised land of freedom along the Underground Railroad. A woman of deep Christian faith, she followed God’s voice and pursued the visions He planted in her heart to achieve true greatness.

Soon she will be honored as the first African American to be featured on U.S. currency.

Raised on a plantation in Maryland, her mother – a cook in the “big house” – taught her Bible stories. She came to faith in Jesus as her Savior and Lord at her mother’s apron strings.

While Tubman never learned to read, she had a phenomenal memory and memorized long passages of Scripture that informed her captivating oratory later in life.

One terrifying incident as a 13-year-old slave severely impacted her future. When Tubman refused to help tie up another disobedient slave, an overseer hurled a two-pound weight toward her, which struck her head and cracked her skull, according to the book Bound For the Promised Land: Harriet Tubman, Portrait of an American Hero by Kate Larson.

Bleeding and unconscious, she was carried back to her owner’s house and laid on the seat of a loom, where she remained without medical care for two days.

Then she was sent back into the fields to work. As she bent over the crops, blood and sweat rolled down her face until she couldn’t see and could work no more.

Tubman began having seizures in the weeks and months that followed her injury and she would fall asleep at irregular times without warning. Her slave master recognized her diminished capacity and tried unsuccessfully to sell her.

Larson believes she may have suffered from temporal lobe epilepsy as a result of the damage to her skull, which stayed with Tubman the rest of her life.

Sadly, Tubman’s bouts of uncontrollable sleepiness caused some to think she lacked intelligence. But appearances in this case were deceiving. In spite of the injury, she retained acute mental faculties and began to pray for her master: “Oh, dear Lord, change that man’s heart and make him a Christian.”

One day she learned that she would be sent to a chain gang in the far south – considered a terrible fate for any slave. The tone of her prayers shifted, and began to mimic the imprecatory prayers of David. “Lord, if you ain’t never going to change that man’s heart, kill him Lord, and take him out of the way, so he won’t do no more mischief.”

The prayer proved prophetic. Tubman’s master died suddenly shortly after the prayer and she was filled with remorse. “Oh, I would give the world full of silver and gold if I had it to bring that poor soul back; I would give everything! But he was gone, I couldn’t pray for him no more.”

In 1849, when Tubman was in her late twenties, she felt she heard the Lord’s voice urging her to flee northward. After an initial attempt with her two brothers that failed, she set out again by herself, hiding during daylight hours and traveling by night, fixing her eyes on the North Star for direction.

Tubman connected with the illustrious Underground Railroad, comprised of abolitionists, freed slaves, and Quaker activists to make her way. A Quaker community nearby was probably her first stop during her escape, according to Larson’s account.

Her journey of about 90 miles on foot probably took at least a week.

When Tubman crossed into Pennsylvania’s free soil she felt like she had been born again: “I looked at my hands to see if I was the same person now (that) I was free. There was such a glory over everything, the sun came like gold through the trees and over the fields, and I felt like I was in heaven.”

While filled with joy, Tubman soberly realized she must find a way to survive on her own. “Oh, how I prayed then,” Tubman recalled later, “lying on the cold, damp ground, ‘Oh, dear Lord, I ain’t got no friend but you. Come to my help, Lord, for I’m in trouble!'”

With God’s help and her newfound connections with abolitionists, she found odd jobs and saved a little money. When she learned her niece and two children would be sold in Maryland the year after her own escape, she made her way back to Baltimore and hid until she could make arrangements for their escape. Tubman was able to bring them with her to Philadelphia.

The following spring, she went to Maryland again to aid her brother’s escape, along with two other slaves.

Over 11 years, Tubman personally rescued at least 70 slaves in about 13 expeditions, including her three other brothers, Henry, Ben, and Robert, their wives and some of their children. She also assisted and directed 50 to 60 additional slaves who escaped to the north. Some have estimated she was ultimately responsible for liberating as many as 300 slaves.

Tubman’s faith was a major resource on these dangerous missions. She often spoke of “consulting with God,” 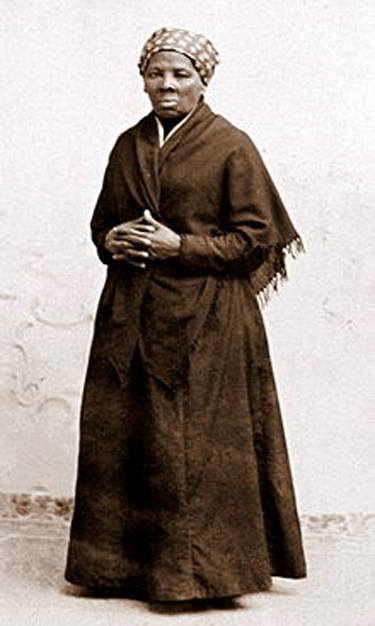 and trusted that He would keep her safe, according to Catherine Clinton’s account in On the Road To Harriet Tubman.

Tubman said she would listen carefully to the voice of God as she led slaves north, and she would only go where she felt God was leading her.

Abolitionist Quaker Thomas Garrett, who worked with her said, “I never met with any person of any color who had more confidence in the voice of God, as spoken direct to her soul.” Her faith in God seemed to always bring immediate assistance. She used spiritual songs as coded messages, warning escaping slaves of danger or directing them toward a safe path.

Tubman also carried a gun and was not afraid to use it. She felt her gun offered some protection from slave catchers and their dogs. She also threatened to shoot any escaped slave who wanted to turn back on the journey since that would threaten the safety of the remaining group.

Asked if she would actually kill a reluctant escapee, she said, “Yes, if he was weak enough to give out, he’d be weak enough to betray us all and all who had helped us, and do you think I’d let so many die just for one coward man?”

Many times she narrowly escaped danger. She felt God protected and hid her during the times she had to lie in a wet swamp or bury herself in a potato field. When God provided safe passage she always gave Him the glory.

In one instance God warned her she must turn aside from the path she was on and cross a rushing river immediately. Not knowing the depth, the men with her hesitated. Harriet stepped boldly into the current, and found it never rose above her chin, according to an account on Christianity.com by Dan Graves.

When the men saw she was safely across, they followed her. Later Harriet learned that a group of desperate men had been waiting on the path they were traveling and planned to seize them. If she had not responded to God’s ‘still small voice,’ they would have been captured.

Once God warned her that her parents were in danger. God directed her to go to a certain house and ask for 20 dollars.

“The owner of the house told her that the Lord had sent her to the wrong place. Harriet would not budge, but drifted asleep, waking only long enough to insist that she wasn’t leaving until she got the money. Visitors passing through the busy house spread her story and collected $60 for her. Her father, it turned out, was facing criminal charges for helping runaway slaves, and the money was needed to whisk him to Canada,” Graves noted.

“Sudden deliverance never seemed to strike her as at all mysterious,” biographer Sarah Bradford wrote. “Her prayer was the prayer of faith and she expected an answer . . . . When surprise was expressed at her courage and daring, or at her unexpected deliverance, she would always reply, ‘Don’t, I tell you, Missus. It wasn’t me. It was the Lord!’ ”

“On my underground railroad, I never run my train off the track and I never lose a passenger,” Tubman recounted.

Her life is a mighty example of a woman who trusted God moment-by-moment. Her face, which will soon adorn a U.S. currency note, bears witness to her as one of the most remarkable women in American history.

“No fear of the lash, the bloodhound, or the fiery stake, could divert her from her self-imposed task of leading as many as possible of her people ‘from the land of Egypt, from the house of bondage’” to freedom, noted Rebecca Price Janney in Great Women in American History.