Top Ten Christian band Twenty One Pilots declared its musical manifesto three years ago in the song “Car Radio,” “I will try with every rhyme to come across like I am dying to let you know you need to try to think.”

Twenty One Pilots’ hit “Stressed Out” is currently played on secular radio stations across the country and in Europe, and the duo is selling out concerts at every venue. Even though they are open about their faith, the band continues to sneak like a hacker through the world’s default gospel-rejection mechanism.

While the dialectic voice confuses secular reporters, the message of salvation carries through to their listeners.

“When I first listened to their music I was like, I’m not alone. I thought I was the only one,” wrote Mattie on a fan site in August 2015. “Twenty one pilots really did save my life in more ways than one.”

Twenty One Pilots is a genre-melding duo composed of vocalist Tyler Joseph and drummer Josh Dun, both 27-year-olds from Ohio. They attended Five 14 Church (as in Matthew 5:14 — “You are the light of the world”) in New Albany, just outside Columbus. Josh now lives in Los Angeles.

The band was formed when Tyler ditched basketball in the eleventh grade to become a musician. He tore through learning piano to bass and ukulele.

“I had identity issues. I didn’t like being the guy who played sports,” he says in a YouTube interview. “So I set up a microphone and a little studio. My mom’s trying to do the dishes and she hears her son screaming his head off down in the basement trying to record vocals, and she’s gotta be thinking, ‘What the heck is going on with him?’ So they were really confused.”

Tyler’s crazy dream is today paying big dividends, not just in terms of downloads and crowds, but also in terms of souls. Their angst-riddled lyrics are resonating with Gen-Y’ers and Gen-Z’ers, showing them a way to hope and faith.

While “Stressed Out” is an innocuous ditty about young adults yearning for the carefree days of childhood, other songs on their two albums – Vessel and Blurryface – pack plenty of gospel punch.

The duo signed with a secular label (Fueled by Ramen) and gets played mostly on non-Christian radio. But make no mistake. Though subtle at times, they are unequivocally Christian. 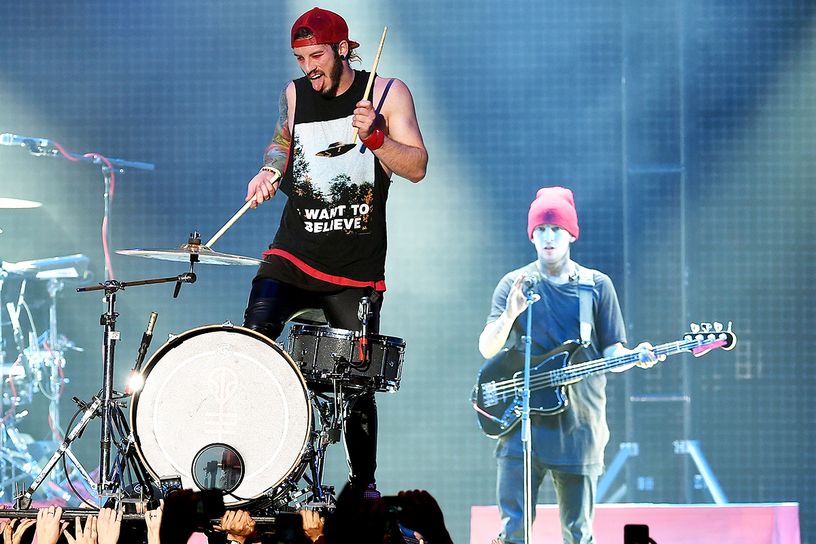 In the “Holding on to You” video, Tyler escapes the clutches of zombies. “I’m taking over my body, back into control. It seems a lot like flesh is all I got. Not any more, flesh out the door. I must’ve forgot, you can’t trust me… You should take my life. You should take my soul.”

Sinners who consider suicide when lonely at night are encouraged to “fight it. Take the pain, ignite it. Tie a noose around your mind loose enough to breathe fine. Tie it to a tree, and tell it, ‘You belong to me. This noose is just a leash. You must obey me.’”

The language is just the type of poetry this generation relates to, but it’s also unadulterated Bible message. The song hails from Jer. 17:9: “The heart is deceitful about all things and desperately wicked. Who can understand it?”

Tyler is giving a modern voice to Pauline doctrine. The song echoes the Roman longing for freedom from fleshly desires, and Tyler breathes new life into Paul’s paradox that death to sin is life in Christ and freedom from sin is obedience to Christ.

In “Heavydirtysoul,” Tyler says, “Death inspires me like a dog inspires a rabbit. Can you save my heavy dirty soul?”

And in “Car Radio,” the singer exposes how sinners deaden internal pain with meaningless lyrics put to a catchy tune.

“There are things we can do, but from the things that work there are only two. And from the two that we choose to do, peace will win and fear will lose,” Tyler sings. “There’s faith and there’s sleep. We need to pick one please because faith is to be awake, and to be awake is for us to think, and for us to think is to be alive. And I will try with every rhyme to come across like I am dying to let you know you need to try to think.”

Not every Christian is going to appreciate the poetry. After all, it’s not exactly praise and worship.

“Josh and Tyler’s music has really had a positive influence on the way I view myself and my depression,” Carlynn wrote on a fan site in 2013. “I’ve never heard songs about mental illness before that are obviously trying to make a change in the listener’s life, and listening to their songs make me feel empowered, not more sad. Their music also made me realize I’m not alone.”

Twenty One Pilots takes its name from the Arthur Miller play All My Sons, in which a self-made industrialist sells the Air Force defective parts that cause the death of 21 aviators during World War 2. He is confronted later in life by his decision to cut corners, oblivious to endangering others, in his quest for profits. The name speaks volumes about doing the right thing, even if it’s not easy or convenient.

“I could relate to the fact that making the right decision in life sometimes takes more work,” Tyler told Rolling Stone magazine. “It takes more time, and it can feel like you’re going backward.”

Interviews with secular media can be misleading when it comes to Twenty One Pilots. Tyler tells reporters that his songs are born from true insecurities, and they take him at face value.

The dark makeup on his hands and neck on his current concert tour, Tyler says, represents the oppressive insecurities he feels. More likely, it represents sin as part of the Blurryface persona he’s adopted as his Romans 7 alter ego.

Tyler turned down a basketball scholarship to pursue music. When two other original members quit, Tyler took on Josh, who was working at the drum department at the local Guitar Center.

Of the two, Josh came from a stricter Christian household – and he rebelled more as a teenager. “My parents almost sent me to a military school,” he told Rolling Stone. “They didn’t know what to do with me, and I was always in detention. I never got into drugs or alcohol, but I would yell at my parents and just treat them terribly. Everything was an argument. Looking back, they were trying their best.”

A turnaround in his relationship with his parents came when he moved out and he shared some time with his dad. “I said to my dad, ‘Are you disappointed that I’m working a minimum-wage job and I didn’t go to college?’ I’ll never forget his response. He said, ‘It’s not about how much money you make or what your job is, but it’s more about your character. For that, I’m proud of you.’ It gave me motivation.”

Twenty One Pilots built their fan base by hawking tickets at a Chick-fil-A in the Polaris mall food court in Columbus, Ohio. Their songs – a catchy mix of rap, reggae, pop and ukelele – confounded radio station formats and originally didn’t get much airtime.

But the band grew on the popularity of its high-energy concerts, which sold out venues. Tyler became known for his antics of climbing the scaffolding and throwing himself into the audience. Soon, the duo needed an 18-seater van with a bed in the back to tour on the road.

This year, Blurryface reached #3 in album sales nationwide, and the group nearly sold out two concerts at Madison Square Garden.

Critics are scratching their heads about the band mates. Some have wanted to see a similitude with Eminem’s 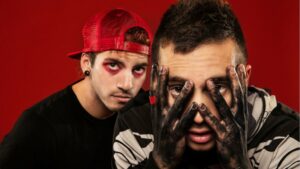 struggle with demons. But Eminem’s “Demon Inside” is darker and finds no hope. It’s entirely possible that Twenty One Pilots didn’t base their work on Eminem at all and instead draw their inspiration straight from the Book of Romans.

When a YouTube interviewer probed if Tyler was being overly self-critical when he called himself “messed up,” the young star dipped deep into Romans’ reasoning.

“I know I’m messed up. I think to myself I should be able to control myself,” Tyler responded. “I look at a lamp and I decide that I’m going to stand up and not hit that lamp. Why can’t I make decisions like that about everything in life. I’m not going to get angry at my brother. I want to be the best brother. Why can’t I do what I want to do? That’s messed up. Something is broken in the way we live. It’s proof that something is not right.”

The heavy reliance on the Bible was apparently lost on the interviewer. That’s okay because the message is connecting with the youth.