Ali Sayed Husnain Shah is from a prominent Shia Muslim family with direct ties to the prophet Muhammad. When he was 15, he traveled from his home in Pakistan to Oxford, England to visit his ailing aunt Gulshan.

The story of his spiritual journey is chronicled in his new book, The Cost: My Life On a Terrorist Hit List.

He was shocked to learn that his aunt left Islam for Christianity several years before his birth.

Ali couldn’t believe his aunt would dishonor their prominent Shia family by following Jesus. He soon discovered his aunt wrote a book about her conversion to Christ. Overcome with curiosity, Ali found a copy of the book and began reading. 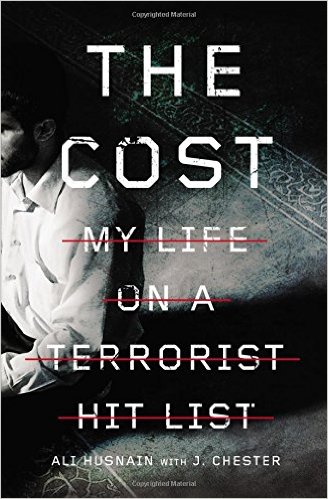 After he read the book he was still confused, so he decided to attend a church service with her to learn more.

While at the church service, the pastor asked the congregants, “Who wants to see Jesus?”

The Holy Spirit began to draw Ali’s heart, and he felt compelled to get out of the pew and walk forward, so he could “see Jesus.”

“I wanted to see Jesus. He was the riddle at the center of all this, the reason Aunt Gulshan had turned her back on her family, her heritage and her religion,” Ali noted in his book. “He was the one who was to blame, and here was a man offering me the chance to see Him for myself.”

The pastor lifted up a prayer for Ali and as he prayed, Ali said he felt heat emanating from the pastor’s hand. At the same time a light behind his eyelids got brighter and brighter. Ali said his legs crumbled and he was drained of all his power and strength.

Then Jesus appeared to him in a powerful vision.

My son, You wanted to see me. I’m here. Obey me. I will forgive your sins and give you eternal life, Jesus impressed on his heart.

That night, Ali went back to his aunt’s house and went to sleep. Amazingly, Jesus appeared to him again!

Don’t be afraid, Jesus told Ali in the dream. I will protect you.

When Ali returned to Pakistan, he stopped attending the mosque and decided instead to go on top of his roof to pray to Jesus. Whenever he prayed to Jesus, the Lord’s peace descended on his heart.

While he tried to keep his faith hidden, his newfound conviction about Jesus slipped out unexpectedly. He got into a discussion with his classmates outside their school about the correct way to sacrifice an animal in order to be absolved of sin.

“You are wrong,” Ali told them. “Sacrificing an animal is not the right way to deal with sin. I had a dream when I was in England that showed me the truth. If you want to know how to deal with sin, you have to pray to Jesus.”

As he watched their expressions, he knew was now in uncharted waters. After he left school the next day, his classmates attacked him. After they threw him to the ground and pinned his legs and arms, an older man with a beard and turban approached him with a menacing expression.

“You tried to make kafir out of our children,” the man exclaimed. “Islam gives me the right to kill any infidel who does that or speaks against our beloved prophet.”

The man reached into his cloak, drew a knife, and stabbed Ali in the chest. The knife just narrowly missed Ali’s heart but, but managed to puncture his lung.

Feeling unbearable pain, Ali lapsed into unconscious. Then Jesus appeared to him a third time!

You were injured because you were defending me. I will not let you die … I will protect you, Jesus said.

In his riveting book, he describes how he went from being a member of one of the most respected Islamic families in Lahore to someone considered an “infidel,” which forced him to move from city to city to evade the fury of Wahabi radicals who sought to kill him.

If you want to know more about following Jesus, go here