He was a computer scientist-engineer working on avionics for the F-22 stealth fighter aircraft when he suffered a nervous breakdown and a massive automobile crash that nearly killed him.

As his car hurtled through the air and hit a freeway stanchion and a tree that hot August night in 2002, God gave him a spectacular vision of the afterlife that changed his life.

“I lost consciousness as my body was tossed around like a rag doll by the impending collision,” says Randall Rathbun, 64.

Rathbun became a Christian in 1969 through the influence of his older brother, who was studying at seminary.

But in his work for TRW in Rancho Bernardo at their Military Electronics Avionics Division, he got bored and distracted, which led him down the wrong path as a believer.

He attended church regularly and was part of a worship team, but something was amiss. “I wish I could say I lived a pure, pristine life, but I wasn’t and that’s what got me in trouble,” he recounts.

“On Saturday evenings I was living a double life. I was going down to San Diego, visiting prostitutes, not realizing I was setting myself up for a very serious encounter with reality. Every time I visited a prostitute, my conscience would severely condemn me and I always ended up feeling more filthy and dirty in my spirit than ever before.”

He says his wayward sexual activity began on the Internet. “The Internet is just awash with it,” Rathbun notes. “Proverbs says to watch your eyes. I wasn’t watching my eyes; I was allowing them to wander. Plus I was a computer scientist and knew how to access more than most people.”

In addition to his work on the F-22, Rathbun got involved with earthquake research on the side, and developed a friendship with another engineer in Oregon who was building advanced sensors they believed could detect quakes before they happened.

The two men thought California was setting up for an 8.0 quake, and Rathbun warned his general manager at TRW. “I said there’s a big quake coming and I want to alert you ahead of time, but I didn’t have documentation or evidence and I ended up looking very silly, like an alarmist. They didn’t know what to think.”

His supervisor called him in and warned that he was spending too much time on earthquake research and it was affecting his work on the F-22 project. They ordered a psychologist to evaluate him.

“It was very unnerving and I lost it,” he admits. Instead of going to his appointment with the psychologist scheduled at 5 pm on a Friday, he “escaped.”

“I thought my whole career was crushed. I didn’t think the psychologist would understand a single thing about my earthquake research.”

As he drove north on Highway 163 in his Mitsubishi Eclipse toward his home in Escondido, he suffered a nervous breakdown.

A nervous breakdown or mental breakdown is usually temporary in nature, and often tied to psychological burnout, severe overwork, or other stresses that may temporarily overwhelm someone who is otherwise sound mentally.

As his car raced ahead at high speed, he thought he heard a voice telling him to take his hands off the wheel. By the time he put his hands back on the wheel it was too late. The car was out of control, went off the shoulder, 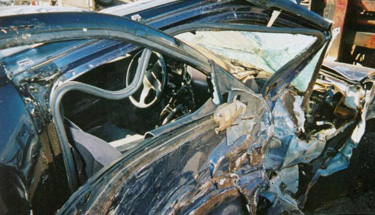 and hurtled into the freeway stanchion and a eucalyptus tree.

“Suddenly I awoke to find myself arising about 20 feet above my car, but bound in chains,” Rathbun recounts. “I struggled with all my might to break free, but it was totally useless.”

He could not imagine where he was. Then he began to fall. “The sensation of falling continued to grow as I picked up speed. It felt like an elevator in free fall. I could sense that my descent was quickening, faster and faster.”

He was not prepared for what happened next. “An extremely loud scream burst right beside my head.” The scream was so loud, it almost deafened him.

And I recognized what it now was saying…”

Down he went, descending into darkness and smoke.

He cried out amidst the onrush of gloom, “Why?”

Suddenly three scriptures appeared before him, written, but somehow also spoken. He says those three Scriptures are burned indelibly in his mind.

The second said, “Verily, verily, I say unto you, Whosoever commits sin is the servant of sin.” (John 8:34)

Then a third spoke to him, “Be not deceived, God is not mocked, whatsoever a man sows, that shall he reap” (Galatians 6:7)

“As I heard the third living verse, I was stung right through the heart, totally rebuked.” Suddenly the remembrance of his secret sins flooded upon him in a convicting manner.

His willful sins, uncleanness, and defiance of God’s clear teaching flashed into his mind. “I could see a long, long trail of sexual sins. Worse yet, I could see how I had deceived myself.”

“I had truly deceived myself into believing that I could willfully sin, yet God’s grace would cover me.”

Now he realized he deceived himself, but had not fooled God at all. He felt God would not forgive him and he was about to receive the full payment for his disobedience.

“I became paralyzed by fear as a worse thought gripped my soul. It was a thought so tremendous in magnitude that human minds cannot comprehend it fully while on earth. I was going to hell for all eternity, forever and ever and ever.”

“No matter how long I could think, eternity was yet an infinite distance beyond that.”

He realized that God is perfectly just and he was about to receive that perfect justice, the fruit of his sin.

As he descended, the atmosphere became unbearable. “It began to get very warm and oppressive. I began to have trouble breathing; it was as if thick smoke was starting to smother everything.”

Then he heard a strange roar — people screaming!

“The screams were so awful, that you couldn’t bear them. Just one scream alone would make the hair on the back of your arm stand up. But I was hearing millions of them,” he recounts.

Then he heard a new sound, as terrifying as the screams. The sound was caused by flames of fire, a conflagration beyond description.

“It sounded like continuing rolling thunder, or of flames consuming but yet not consuming. I had heard fire while living on the earth and had seen 100 foot flames incinerate hillsides in a few seconds, but the flames on earth were nothing compared to the sound I was beginning to hear.”

Suddenly, a very loud popping sound rang out, like gunshot being fired next to his head from a 30-30 Winchester or M80 firecrackers. The popping sounds rang out as he was about to hit the Lake of Fire.

Due to its length, this story has been divided into two parts. Read part two here