He grew up in a predominantly Jewish neighborhood in Cleveland. When his family ventured into a “Christian” neighborhood to view Christmas lights, his mother warned him about anti-Semites lurking in the area.

“I didn’t know one Christian from another, but I knew there were Christians and Jews, Gentiles and Jews. There was us and there was them,” musician Marty Goetz recounted to Chosen People Ministries, for their I found Shalom video series.

Marty caught the show business bug in college at Carnegie Mellon University and began to perform in summer stock theater and played local clubs with his friend Bert. “We won the best new act when we were up there the first year, we thought we were on our way,” Marty said.

But Bert, a Methodist, decided to explore a deeper faith so he visited The Rock Church. He came home and excitedly told Marty he was born again.

“I had no idea what that was,” Marty noted. “I knew that Jimmy Carter was born again, but Bert now was a born again Christian, and after that it just got terrible, because he was telling me all the time about Jesus.”

Bert’s interest in their musical partnership waned as his love for Jesus soared. “He began to preach to me and life got very irritating because Jews do not believe in Jesus.”

At 25, Marty was interested in meeting girls and hanging out late at night. He had also begun to smoke marijuana. “I just wanted to be one of those cool guys in the late 70s,” he said.

Marty’s anger intensified because every time he saw Bert he only wanted to talk about Jesus. “I cared about him but he freaked me out. I didn’t want to know about all those things, but he was praying for me, all his friends were praying for me. They would even come to see me play in the piano bars.”

Curious, Marty decided to buy a Bible to see if he could “crack the code.”

“I didn’t want anything to do with it but I needed to know who is this Jesus and why do all these people believe in him. The more I thought about them the angrier I got and the more frustrated I got.”

Marty finally decided he had enough and would move away from them. “I said, ‘I’ve got to get out of New York. I have to go where people are normal,’ so I moved to Los Angeles, California, of course.”

Surprisingly, when he packed for the move west, he decided to include a large family Bible from his parents’ home in Cleveland.

When he arrived in L.A., he began to peddle the songs he was writing in the morning, and in the afternoon he perused the large family Bible.

One day he finally summoned the courage to read the New Testament. When he opened the first page of the Book of Matthew, he was shocked by what he discovered. “It says the book of the genealogy of Jesus Christ, the son of Abraham, the son of David, and I thought, ‘That’s strange. That’s Jewish. I know about those people.’”

The Jesus of the New Testament seemed to come alive for him. “He wasn’t like that dead Jesus on a cross at my friend Kevin’s house or in the church. He was alive and he was Jewish,” he noted.

Marty met Annie, a Christian friend of Bert’s who lived in Los Angeles. “She’d been praying for me for years and we became friendly.”

One day he was watching her apartment while she went to a Bible study. He walked out on her balcony, which overlooked the Sunset Strip, and was amazed to see a bright white lighted cross.

He stared at the cross, transfixed. Then he began to wonder, Is Jesus after me?

When Annie returned from her Bible study she told him very directly, “Yes, God is calling you Marty!”

The following Sunday she invited Marty to the beach and Hal Lindsey, author of The Late Great Planet Earth, was speaking. At the end of the message Lindsey said, “Brother Gideon, come on up here. We’re going to take communion together.”

Brother Gideon got up, held up the bread and said, “Baruch ata Adonai Eloheinu, Melech ha Olam motze lechem min ha’aretz.” Then he prayed over the wine, “Boray pri hagefen.

“He said the Hebrew prayer over the bread and wine and it was completely unsettling to me. I did not expect the prayer I had learned as a little kid growing up in Cleveland to be said on the beach in Los Angeles in the name of Jesus.”

With his head spinning, Marty told Annie, “I’ve got to get out of here. Please take me home.” 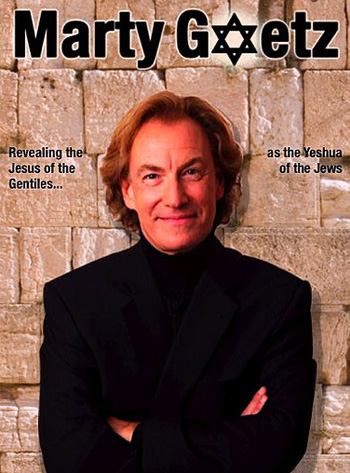 He curled up in the back of Annie’s car in a fetal-like position, “freaking out” and “shaken” by what he was experiencing.

“Marty, I hate to tell you this,” Annie said, “but I can’t take you home because I’ve got to go to this other church called The Vineyard and if I don’t go now I’ll be late.”

He reluctantly agreed to go with her and they arrived at another service where people were singing with hands raised, just like the previous service at the beach.

Then something remarkable happened, something completely unexpected. God’s Word and the Spirit had finally softened Marty’s heart. Saving faith – the size of a mustard seed – germinated in his restless soul.

He settled on this realization: “that whoever this Jesus is, he’s after me.” When the pastor gave an invitation, Marty decided, I give up. I surrender. I’m a sinner. I need a Savior. I need Jesus.

After running from Jesus – and his friends who loved Jesus — for months, Marty was born again.

“And I’m not the man I was when I first came to him. He’s taking away a lot of my self-centeredness and my pride and my ego.”

“Somebody said to me when I first became a believer, ‘Marty, he’s going to get better and better and better.’ And you know the older I get, the more I see that I did not deserve to be brought to him. I didn’t deserve for him to come to me and give me his life for my life.”