A congressional committee in the Philippines approved a bill last month that would create an independent Islamic state in five provinces on the island of Mindanao, where Christians have long faced hostilities from Islamic militants and Muslim family members.

The Philippines’ second-largest island would thus harbor an independent state under rule of Islamic law (sharia) on its western flank in provinces with sizeable non-Muslim populations. Currently the area already has a measure of autonomy as the Autonomous Region of Muslim Mindanao (ARMM), and the proposed Bangsamoro Basic Law (BBL) would give it even greater independence.

President Benigno Aquino III submitted the bill to Congress last September as a means of ending violence in the region. The House Ad Hoc Committee approved the BBL on May 20 with 50 members voting yes, 17 voting no and one choosing to abstain. A March 2015 poll found that 44 percent of Filipinos opposed passage of the bill and 22 percent supported it. In Mindanao, 62 percent of those surveyed opposed the bill.

The director of a ministry based in Mindanao fears a new Bangsamoro political entity could result in deprivation for Christians.

“The area of the desired caliphate has many Christians,” said the director, whose name is withheld for security reasons. “Once it is implemented, it will be a problem to be under sharia law. It could be that people who are non-Muslims can keep our property only if we are going to convert. If we do not convert, we may have to leave.”

As someone who has planted churches in the proposed Bangsamoro region and other Islamic areas since 2006, the indigenous missionary knows how hostile Muslims in Mindanao can be. In 2013 Muslim extremists killed one of the pastors his Bible college had trained, along with two of the pastor’s three daughters, ages 6 and 8. Former Muslims who have come to Christ under the indigenous ministry’s influence face threats and violence, not only from Islamic terrorist groups, but from Muslim family members, the director said.

“They are persecuted if they continue to practice the Christian faith they have,” he said. “So many of them transfer to another area to avoid ‘honor killings.’ Members of their own family will kill their wife and their children.”

Mindanao’s population is 20 percent Muslim, with most centered in the ARMM provinces, where Islamic missionaries arrived nearly 200 years before Spanish Catholic colonization began in 1565. The Islamic terrorist groups in Mindanao see their guerrilla war of independence with the Philippines government as an extension of their historical battles with Spanish, Japanese and U.S. occupiers.

Working in areas where both Islamist and communist terrorists are present, the ministry director and his teams are able to reach pockets where a foreign missionary would be quickly identified and kidnapped or killed. His ministry has planted 18 house churches, 37 churches with buildings and 11 underground fellowships since he began evangelizing in 2006.

At that time, most foreign missionaries were in the process of leaving the country due to kidnapping and other dangers. The U.S. State Department has warned against travel to Mindanao since January 2009.

“The ransom business, the kidnapping, brings big money — they’ll target anyone, but especially foreigners,” he said. “If you don’t watch where you are going, you become a target.”

Foremost in his strategy for keeping Muslims from killing non-Muslims is to win them to Christ, he said.

“If they have a changed heart, they will be a new person in the Lord,” he said. “From 600 to 700 Muslims have become Christians through the ministry. I’ve baptized around 300 persons. Some of them keep it secret because it’s so dangerous. One word that will leak, and they could die.” 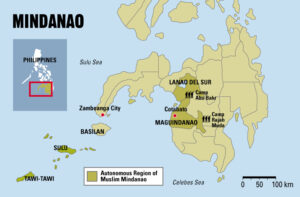 The dangers are such that the missionary and his teams no longer stay in such areas to evangelize or baptize after 3 p.m.; they must set out on tortuous jungle roads by then to keep from getting caught in terrorist-infested zones after dark. “As long as the sun is still out, they will not do bad things,” he said.

After one visit, a tire on his team’s truck went flat on the two hour and 40-minute drive over a muddy road from the village to the highway. Within minutes of changing the tire, the spare tire also went flat. They asked a local vendor for help. He told him nightfall with its dangers was too close, but he loaned them a hand-pump for bicycle tires. The five team members pumped 100 times each, jumped into the vehicle and went five minutes at a time before the tire would deflate again.

“We reached the highway at 1 o’clock in the morning,” he said. “We had no water, we were so tired, but we thanked the Lord that we were alive. Because while we are on the road, anything can happen to us. I’d been crying to the Lord, ‘Lord, spare us, spare us,’ because that’s where our missionary was ambushed in 2013. Muslim terrorist groups have snipers on that road.”

The indigenous missionary killed was returning home from leading a Bible study when Islamic extremists blocked the road with lumber. Besides being upset by his preaching and sharing Christ, the militants accused him of being an agent for the military, the director said.

“An influential Muslim, someone everybody listens to, was mad at him, and he accused him of being a military agent,” he said. “But still that is a very shallow reason to kill him. If that was the only reason, why include his wife and daughter? But that’s part of it.”

The dangers are not limited to the ARMM provinces. The ministry has planted a church in Davao del Sur that the director is not able to re-visit due to the presence of Islamic extremists; he usually visits churches he’s planted every month.

As it is costly to bring married disciples with their families to his center, he and his teams also hazard visits to their areas to conduct week-long trainings, “and some of them are being used by God to preach in the churches there,” he said.

If the new Christians are single, he said, the ministry can usually afford to bring them to his center in an undisclosed town for study and training. For secret Christians in some areas, the ministry will hold one-day discipleship trainings in another area for them to keep their Muslim families from learning of their faith.

In each village he and his teams visit, they first ask the local chief about the needs in his area. Among tribal people with animist beliefs, the need is usually for food. Village heads in Muslim areas usually ask for water or medicine, he said. Wherever the ministry provides a water purification unit, he said, the ministry usually obtains access to share the Bible.

Among the tribal peoples, he is still able to carry out evangelistic campaigns to large groups. Villagers who embrace Christ then let him know of even more remote villages that have no Christian presence.

“They’ll find a way to introduce me to the leader there, and then if it is really far, I will make a schedule to go there,” he said. “We’ll get a motorcycle, with two pastors to assist me, and we go there and we talk, and I’ll tell them what is my purpose — ‘I will bring the Word of God to your people, and we are called by God to do this for you.’”

He encountered one tribal group that practiced animal sacrifice, cutting off chicken heads and pouring the blood on the “soil god,” into the “water god” and throwing it up to the “air god” in hopes of them granting a good harvest, he said.

Tribal people end up learning not only about Christ but also how to read, through his ministry, he said.

The ministry has trained 67 pastors and more than 30 workers, in addition to the staff of 12 at the ministry headquarters. Their greatest need is prayer because of the spiritual warfare raging in the area, he said. But they also need funds for generators, motorcycles, bicycles and Bibles, as well as for vocational training in carpentry and farming so that pastors can support their families.

“Even my Christian friends will ask me, ‘Why go there? Do you want to leave your family bereft?’” he said. “I say, ‘That is where God called me; I just obey Him.’ Seeing fruits of Christ makes you crave more. The Bible is spiritual bread and water. Once you bring in the gospel opportunity, it’s so sweet for them.”