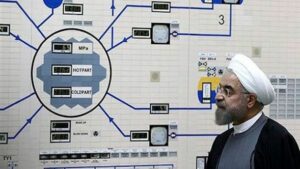 According to a secret side agreement seen by The Associated Press, Iran will be allowed to inspect and report on one of their key nuclear sites themselves, bypassing the U.N. agency everyone thought would be conducting the oversight.

This new, previously undisclosed detail will certainly embolden critics of the deal signed by the U.S., Iran and five world powers in July. Those critics have complained that Iran cannot be trusted, while supporters maintain there are strong verification safeguards built into the agreement.

The site in question is located at the Parchin Military Complex, located 19 miles south of Tehran. Iran has refused access to Parchin for years and has denied any work on nuclear weapons at that location, according to Fox News.

But U.S. and Israeli intelligence has led to suspicions that Iran may have experimented with high-explosive detonators for nuclear weapons there.

The Parchin deal is a separate, side agreement worked out between the International Atomic Energy Agency (IAEA) and Iran. The U.S. and the five other nations that signed the Iran nuclear deal were not part of this agreement but were briefed on it by the IAEA and endorsed it as part of the larger package, according to Fox.

Without revealing its contents, U.S. officials have described the document as nothing more than a routine technical arrangement between Iran and the U.N.’s IAEA on the details of the inspections.

During a hearing on Capital Hill July 23rd, Sen. Bob Menendez, D-NJ, and Sen. James Risch, R-ID, questioned how Parchin would be inspected. Kerry said the Parchin inspection was “a classified component” of the deal and wouldn’t go into specifics, according to Fox.

Astoundingly, this agreement diverges from normal inspection procedures between the IAEA and other countries by essentially surrendering the agency’s investigative authority to Iran.

Further, it allows Tehran to employ its own experts and equipment in the search for evidence for nuclear weapon activities – the fox guarding the proverbial hen house.

Evidence of this surprise concession will certainly increase pressure from U.S. opponents as they review the nuclear deal and vote on it in early September.

If the resolution passes and President Obama vetoes it, opponents will need a two-thirds majority to override it. Senate Majority Leader Mitch McConnell maintains that opponents lack the votes – but that was before this stunning disclosure.

U.S. officials have denied claims that a secret “side deal” favorable to Iran exists. IAEA chief Yukiya Amano told Republican senators last week that he is obligated to keep the side agreement confidential, according to Fox.

Olli Heinonen, who was in charge of the Iran probe as deputy IAEA director general from 2005 to 2010, said he can’t think of a situation where a country being probed was allowed to do its own investigation.

The document seen by the AP is a draft version. An official knowledgeable of its contents said doesn’t differ significantly from the final version. He demanded anonymity because he isn’t authorized to discuss the issue.

The document states that instead of carrying out their own probe, IAEA staff will be monitoring Iranian personnel as they inspect the Parchin site.

Iran will provide agency experts with photos and videos of locations the IAEA says are linked to the alleged weapons work, “taking into account military concerns.”

That wording suggests that — beyond being barred from physically visiting the site — the agency will not receive photo or video from areas Iran says are off-limits because they have military significance.

In a normal agreement, IAEA experts would take environmental samples for evidence of any weapons development work, but this agreement says that Iranian technicians will do their own sampling, according to Fox.