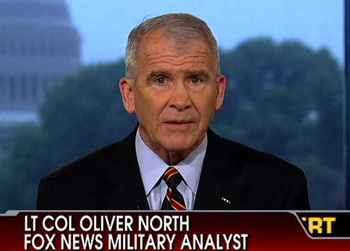 “Number one, directly arm the Kurds, the Christian brigades of the Peshmerga, and work with the Sunni National Salvation Front with Mudhar Shawkat through Jordan,” he stated.

Iraq’s first Christian-only brigade of regular forces launched in March to help retake towns and villages from ISIS. Called the “Tiger Guards,” they answer to the government of Iraq’s autonomous Kurdish region. The brigade was formed out of the remnants of an Assyrian force established in 2004 to protect churches in the region.

Mudhar Shawkat, a former member of the Iraqi Parliament, established the National Salvation Front in 2014, a Sunni political party dedicated to defeating ISIS.

“Number three, put U.S. advisors, forward air controllers and JTACs on the ground with the Kurds, the National Salvation Front, and the Iraqi Army, but not the Iranian Shiite militias.”

JTAC, Joint terminal attack controller, is the term used for the person who directs the action of combat aircraft engaged in close air support and other offensive air operations from a forward position.

North also pointed to Anbar province as a key focus. “Number four, provide logistics support for an Egyptian, Jordanian, Sunni force to go into western Anbar province. That’s the key to the Sunni heartland of Iraq, to secure the Euphrates River valley not just from ISIS, but from the Iranians,” he noted.

“Fifth, most importantly, destroy the will to fight by killing the ISIS leadership and destroy the safe havens they have in Syria,” or anywhere else.

North also faulted the pending nuclear deal with Iran because he said it validates ISIS leader Abu Bakr al-Baghdadi’s claim “to be the savior of Sunni Islam from the Shiites and the Persians.”

“The Obama administration does not have a strategy to defeat ISIS and neither does Mr. Trump. It’s to be expected he (Trump) would have focused on the financial aspect in oil, but winning the war against radical Islam, which is waging a war against us, is different than building a golf course or resort.”

“So far, the Obama plan has produced nothing but refugees, about two and a half million of them, from Syria and Iraq, entire Christian and Yazidi villages have been annihilated. It’s a genocide that rivals that of Rwanda under the Clintons.”