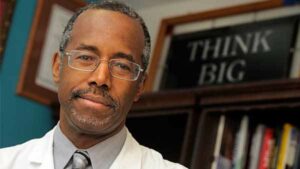 As a teenager, Ben Carson and a friend were arguing over a choice of radio stations. Things got heated and Ben took out a pocketknife and lunged the knife blade toward his friend’s stomach.

The blade hit his friend’s belt buckle, broke in half, which saved his friend from harm and Ben from becoming a murderer. Frightened by what nearly happened, Ben ran home and locked himself in the bathroom with a Bible.

Ben turned to the wisdom of Proverbs, reading “A gentle answer turns away wrath, but a harsh word stirs up anger” (15:1); or “An angry man stirs up dissension, and a hot-tempered one commits many sins” (29:22), and a final admonition, “Pride goes before destruction, a haughty spirit before a fall” (16:18).

Humbled by the power of God’s Word, Carson realized that if left to his own devices, his anger would drive him toward ruin. Instead he prayed that God would help him control his temper instead of letting it control him, and God answered his prayer.

“When I came out, my temper was gone and I’ve never had a problem since,” Carson revealed in a talk he gave to the LifePoint Assembly of God in Osceola, Iowa, as reported by The Des Moines Register.

He chose instead to live by the words of James 1:19-20 which says, “Everyone should be quick to listen, slow to speak and slow to become angry, for man’s anger does not bring about the righteous life that God desires.”

The retired neurosurgeon – who has inspired millions to overcome adversity with his book and movie Gifted Hands – is now campaigning for the Republican presidential nomination – the only African American running in either party.

“I don’t think there’s anybody who can deny that our land right now is in need of God’s healing hands,” Carson told the congregation, quoting 2 Chronicles 7:14, “If my people, who are called by my name, will humble themselves and pray and seek my face and turn from their wicked ways, then I will hear from Heaven, and I will forgive their sin and will heal their land.”

Carson said two stories inspired him in his life: Up from Slavery, an autobiography of Booker T. Washington, and the account of Joseph’s life in the Old Testament of the Bible.

“That really spoke volumes to my heart. Where you end up has a lot to do with the attitude you adopt in your life,” he told the congregation.

Carson also shared how God has helped him in his life through prayer. When he arrived at Yale University with a scholarship, he thought he was “pretty hot stuff” until he starting failing chemistry class in the first semester.

“You can’t be a pre-med and fail in chemistry,” he said in May at the official National Day of Prayer gathering in Washington, D.C.

The night before the chemistry final exam, he prayed: “Lord, medicine is the only thing I ever wanted to do. Would you please tell me what is it you really want me to do?”

Carson planned to pull an “all-nighter,” but instead fell asleep.

He collapsed into a deep sleep and like his biblical hero Joseph, had a very unusual dream. In the dream, he sat in class and watched a figure in white robes write chemistry problems on the blackboard.

“When I went to take the test the next morning, it was like ‘The Twilight Zone,'” he recounted.

The questions and the answers were revealed supernaturally to him! It may be argued that if he had failed that test, the course of his life would have been very different.

Carson went on to become the first surgeon to successfully separate conjoined twins joined at the head. He also revived an extreme form of brain surgery in which part or all of one hemisphere of the brain is removed to control severe pediatric epilepsy.

In 2008, he was awarded the Presidential Medal of Freedom by President George W. Bush.

Carson always prays before he operates. “Even when I don’t operate, I pray because I feel that God is the ultimate source of all wisdom,” said Carson.

“Quite frankly, as a neurosurgeon, there’s a lot of emphasis on technical ability, but I believe that that’s something that can be taught, but wisdom comes from God and I think that it’s something that you have to seek.”

Through prayer, he has seen God’s hand at work, such as patients waking from prolonged comas, or recuperating from what seemed to be devastating and permanent brain injury or cancer. During a long and complex surgery to separate another set of twins from Zambia, Dr. Carson reached a particularly challenging point in the operation that involved separating a tangle of blood vessels. Carson began to feel frustrated and fatigued.

“I began praying desperately that God would take over and simply use me to accomplish what only he could do,” he noted later. 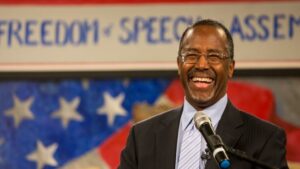 “Despite the exhaustion that had almost paralyzed me a short time earlier, I now sensed a remarkable steadiness in my hands. I felt a strange calm, an almost detached awareness – as if I were merely watching my hands move and someone else had actually taken over the surgery.”

God’s hands seemed to move – providing inspiration and guidance — through the gloves of Ben Carson!

“I don’t know that I have ever experienced anything quite like what happened in the operating room that day. When I separated the very last vein connecting Joseph and Luka, the stereo system at that very moment began playing the “Hallelujah Chorus” from Handel’s Messiah. I suspect every single person in that OR felt goose bumps and knew that something remarkable had taken place. And it was not our doing,” he said, giving all the praise and glory to God.

Carson’s personal relationship with God is supremely important. “The privilege of that relationship is always a gift. Actions do not really have anything to do with it. The question is whether or not we accept what God did for us. When we accept him and allow him a place in our hearts, we become a different type of individual. Our whole life is changed – not because of our behavior but by the relationship itself.”

Carson and his wife, Lacena “Candy” Rustin, met while they were students at Yale. They have three sons and are members of the Seventh-day Adventist Church, where Carson has served as an elder and Sabbath school teacher.

However, Carson attends other churches. “I spend just as much time in non-Seventh-day Adventist churches because I’m not convinced that the denomination is the most important thing,” he said in 1999. “I think it’s the relationship with God that’s most important.”