One of the greatest gifts God gave me was to have a father who was a man of integrity.

Dad was born in humble circumstances. His father left his mother for another woman when dad was only seven years old. From that point on, he had very little contact with his father, a big wound for a small boy.

So dad was raised by a single mom, Reta, a schoolteacher in Costa Mesa, California. Her parents lived a few blocks away, so her dad, Howard Cooper, became a father-figure to dad.

This was in the days when Costa Mesa had dirt streets and farm animals might be wandering about. You never knew when a horse might stick its head in your kitchen or bathroom window – and that happened.

Schoolteachers made next to nothing in those days and dad went to work at an early age by necessity. He was a soda jerk at Pink’s drugstore in Costa Mesa. He set pins at the bowling alley in the fun zone on Newport peninsula when that was still done by hand.

One prankster rolled on dad while he was still setting up pins and the ball smashed into dad’s knee, resulting in a weakness in that knee he carried the rest of his life.

Dad worked his way through Pasadena City College and then UCLA, working for United Airlines, loading and

At UCLA dad was part of the Beta house and he met an attractive Delta Gamma named Mary Elin Gomes. One of their first dates was at the Long Beach pike. Mom was so scared on their wooden roller coaster she slid out of her seat on to the floor, where she was curled-up, holding on to dad’s ankles for dear life.

Mom and dad got married in 1953 on a Wednesday, to save money at the Palos Verdes Country Club, where they had their reception. Those of you who know mom know she loves a bargain, and this was one of her first, great bargains. They were inseparable during their 61 years of marriage.

Dad served in the navy for two years, stationed in San Diego, so I was born there in the naval hospital next to Balboa Park. In those days the hospital had no air-conditioning and I happened to be born during a heat wave in late August. Mom told dad to bring a fan when he came to visit and when he forgot that simple request – she cried and cried — and never let him forget about it.

Dad’s first job out of college was selling computers for Univac, in the days when a computer was the size of your garage.

Mom and dad moved from Torrance to San Pedro and then to Miraleste, and they made a great group of friends along the way through the First Presbyterian Church in San Pedro and through mom’s sorority alumni group.

When dad first started to make a little bit of money, he bought a powder blue Buick Riviera that had really sleek lines and he took up the habit of smoking thick cigars as he cruised in his Riviera. He also stopped regularly for donuts going to or from work, so between that, the Wonder bread, hot dogs and Kraft dinner we were eating at home, it’s a wonder we survived.

The year 1965 was a pivotal year for dad. He was working at a glorified bookkeeping firm with a man named Wayne Hughes. Wayne left to work for an up and coming real estate investment firm and Wayne persuaded dad he should get his real estate license and join him at a company called Property Research.

Dad plunged into real estate and his timing could not have been better. He developed an impeccable reputation at Property Research and ultimately became president of the company, so he was involved in the early development of Coto de Caza in Orange County, California and Six Flags amusement parks in Georgia and Texas.

Dad had a wonderful mind for analyzing and structuring real estate deals, a manner people trusted implicitly, and despite his mounting accomplishments– he never developed a large ego.

In 1971 dad and Dick Lane left to start their own company. Wayne Hughes left at the same time and started Public Storage.

Mom and dad took up tennis with great enthusiasm in the mid-60s, during a time when tennis was gaining huge popularity. Mom played tennis almost every day and dad played on the weekends and they became a formidable doubles team.

Some of my favorite memories with dad were backpacking in the High Sierras. Our first trip together I was about 12 and I wimped-out about two-thirds of the way up the mountain. Dad ended up carrying his pack and my pack the rest of the way up the trail, without any complaint, curses, or anger directed toward me.

Dad had such a beautiful, easy-going personality. I can honestly say I only remember two times in my youth that he was really angry and blew up at me.

I look back now and cherish those times we had in the Sierras, fishing for trout together in the high mountain lakes, sleeping under the stars, marveling at the immensity of the universe.

By the time dad was in his early 50s, he and his partner had made so many great deals buying apartments and commercial buildings, that he could shift into another gear, managing his investments. He had the Midas touch in real estate.

Dad became a life master in bridge and somehow mom arranged a deal with Princess Cruises where they could travel throughout the world for free, as long as dad taught bridge while the ship was at sea.

After they moved from Rolling Hills to southern Orange County, dad took up golf with enthusiasm. I went to the driving range with him just a couple months ago, and at 83, with advanced Alzheimer’s, he could still out-drive me!

I can’t say he was a very religious person when I was growing up. When I was about 10-years-old I asked dad if he believed in heaven and hell. He said, “I’ve always believed that you make your own heaven or your own hell here on earth.”

It was not exactly a ringing endorsement of faith. But in some respects, you could say dad succeeded to a remarkable extent in achieving his vision of paradise here on earth.

Mom and dad were very generous to us, taking us on many family trips that included our kids. Almost every time they came to visit they brought us a gift of some kind. It might be fruit from their family orchard. It might be clothing that mom found on sale somewhere.

In the year 2000, mom and dad were on an around-the-world trip and they were talked into taking a side-trip to the Holy Land arranged by Heavenly Tours. They stayed at the King David Hotel in Jerusalem and had a prime room with a balcony overlooking the old city.

In the middle of the night Jesus appeared to dad while he was sleeping. He had this incredible dream or vision that Jesus appeared to him at the foot of the bed and it was so vivid, so real, that dad talked about it for years afterward.

Despite this encounter, dad was still very quiet about his faith and I wasn’t sure exactly where he stood with God.

About this time mom and dad’s new passion became a small farm in Fallbrook, California, where they went

almost every weekend. In the last 15 years, they developed a solar-powered, organic farm on 11 acres, where dad loved to ride his tractor, tending his crop of avocadoes and tangerines. Fallbrook became a wonderful getaway, another expression of his vision of paradise.

The only thing about making your own heaven on earth is there are certain things you can’t control – like pests on the farm, like certain people (or people who are pests) and some things that happen that you never planned for – like Alzheimer’s disease.

In his late 70s, dad was acutely aware this disease was coming upon him and he took every prescription medicine and nutritional supplement he could find to slow it down. He had a good deal of trepidation about that horrible disease and was nervous and uncomfortable about the subject of dying.

But after he turned 80-years-old, he knew the die was cast. He was sitting at our kitchen table one evening after dinner and I asked him a question that’s very important to my wife Sally and me: “Dad, do you feel like you have an assurance that you’re going to heaven?”

He said no. He said heaven was somewhat of a conundrum.

We explained to him that getting into heaven is not based on how good you are, and even though dad was a really good person, he was still a sinner (as we all are) in need of making peace with God.

We told him that because of our sins, we all deserve the penalty of death and eternal separation from God. We told dad he couldn’t save himself by his good works but that God had provided a way for him through that same Jesus who had visited him in Jerusalem.

We explained that Jesus died for our sins on the cross and He rose bodily from the dead on the third day. He is the Savior of those who put their faith, trust, and belief in Him, and put him first in their lives.

I asked dad if he believed this and if he was ready to pray to receive Jesus, to invite Jesus to come into his heart as his Savior and Lord. 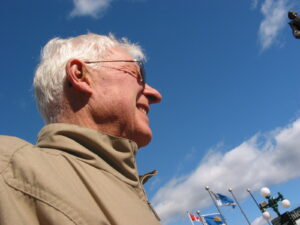 He said he was, so we bowed our heads and dad prayed to receive Christ. After that dad joined a Bible study I led at the house with a small group of men, and I have to tell you, dad was the most faithful man in that group, until he could no longer look up Scriptures and he could no longer read, because the Alzheimer’s had taken its toll.

I felt closer to him during that year and a half than I ever felt, and I have an assurance that we will be together again some day. That’s the greatest gift he gave me and our family.

If you want to know God personally, here are four steps…