She spent her last days answering the call of her Lord, as she shared the good news of Jesus Christ on a mission trip to India with a team from Biola University.

Hasiet Joy Negash traveled with a team from Biola’s Student Missionary Union during the first two weeks of 2015. She visited orphaned children and washed the feet of untouchables. She gave a gospel message in a town where the mayor, a member of parliament and hundreds of teachers were present, according to an article by Jason Newell in Biola Magazine.

On January 15th, the vivacious 19-year-old student collapsed after she complained about breathing difficulties apparently related to asthma. She was taken to a local hospital, but sadly, doctors were unable to revive her.

It was the first death in connection with a university-sponsored trip, according to Biola Magazine. 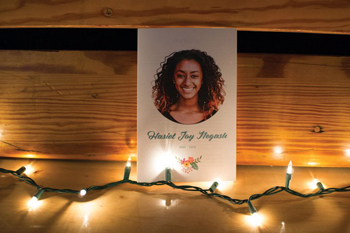 “The only thing my sister ever cared about was doing God’s will,” said her brother, Hosana, at a campus memorial service. “She always wanted to spread the gospel in a foreign country, and when the opportunity arose, there was no changing her mind. The trip to India was all she ever talked about from the day she learned about the trip to the day she left.”

Negash’s passing brought an outpouring of emotion on the university’s campus, according to the magazine.

Negash, a communications major from Seattle, was very involved at Biola since she arrived in 2013. She gave campus tours and welcomed prospective students as an admissions ambassador. She helped incoming students transition into college life as an orientation leader. And she encouraged other students of diverse backgrounds through her involvement in Multi-Ethnic Programs and Development (MEPD).

“Joy was one who crossed cultures daily here at Biola, embracing a wide variety of people, building bridges wherever she went,” Glen Kinoshita said at her service. “May we follow her example, to love across cultures, to live fearlessly and to build God’s kingdom while here on earth.”

Negash, of Ethiopian heritage, was someone whose faith was clearly seen by all, family and friends recounted.

“Anyone who spent time with her knew that it would take at least 20 minutes to get anywhere on campus simply because of all the friends that she needed to stop and talk to and give hugs to,” said sophomore Hudson Tam. “She was so loved by the Biola community.”

During one of her final days on the India mission trip, she got up in front of an auditorium filled with hundreds of people from the lowest caste, opened her red Bible, and spoke of Jesus’ love for the woman at the well, team leader Brady Lee reported. She told them how Jesus cared for those at the lowest rung of society.

“At the time our team didn’t know this, but in the hundreds of people out there, there were five unreached people groups — there were people who had never heard the name of Jesus, and Joy was the very first person to introduce them to Jesus,” Lee said at her service.

At the service, friends urged students to follow her example by not allowing fear to get in the way of following God’s will.

Biola President Barry H. Corey encouraged the community to respond in prayer. “Pray that many from the Biola community will step into her shoes and walk the next leg of the journey, carrying on the high calling of Christ she lived so fearlessly.”

In honor of Joy’s life and legacy at Biola, the university established a scholarship in her name. To offer support, visit giving.biola.edu, select “other” under designation and type “Hasiet Joy Negash Scholarship.”