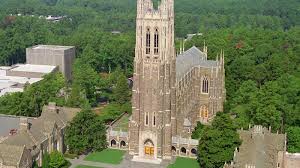 Plans to begin issuing the Muslim call to prayer from a bell tower at North Carolina’s Duke University have been withdrawn after public outcry, the Associated Press is reporting.The Duke Muslim Students Association planned to chant the call, or adhan, from the Duke Chapel bell tower on Fridays. The adhan signals the beginning of the weekly prayer service. The call was to last three minutes and be “moderately amplified,” according to the University.
Duke has historic ties to the United Methodist Church, and the chapel’s associate dean for religious life defended the initial plans as representing “a larger commitment to religious pluralism that is at the heart of Duke’s mission.”
Evangelist Franklin Graham was among those critical of the proposal. Various Christian denominations hold prayer and worship services in the chapel. Approximately 700 of Duke’s 14,800 enrolled students identify as Muslim.Institute on Religion and Democracy’s Religious Liberty Program Director Faith J. H. McDonnell commented:
“Thank you to Duke University officials who were responsive to concerns about issuing the Islamic call to prayer from the chapel tower.”“Duke University would have been guilty of a double standard if it allowed the weekly public broadcast of the Muslim call to prayer from the Chapel belltower while not allowing equal public proclamation of the Gospel, or of Jewish Sabbath prayers.“Additionally, there were significant concerns that the group set to sponsor the prayer, the Muslim Student Association, is a Saudi-backed political group associated with the Wahhabi movement of Islam. It is identified by the Muslim Brotherhood itself as the second most of important of its partner organizations in the ‘civilization-jihadist process.'”
Please continue to pray for Duke University and for no double standards.–Institute on Religion and Democracy