While many trek to their local theaters to see the remake of Left Behind starring Nicolas Cage, a growing number of Christians question the basic premise of the film, which involves the rapture of the church before the Great Tribulation, followed by the visible return of Jesus.

“There’s one major problem,” says Steve Wohlberg, author of End Time Delusions: The Rapture, the Antichrist, Israel and the End of the World (Destiny Image), “the Left Behind books and movies reflect a theology I believe has multiple holes.”

Wohlberg recently completed a four-part DVD series based on his End Time Delusions book, which he admits goes against the grain of what many Christians have been taught.

“A careful study of each New Testament text used to support the rapture theory, taken in context, teaches only one return of Jesus Christ at the very end of the age, not a silent coming followed seven years later by a visible one,” Wolhberg asserts. 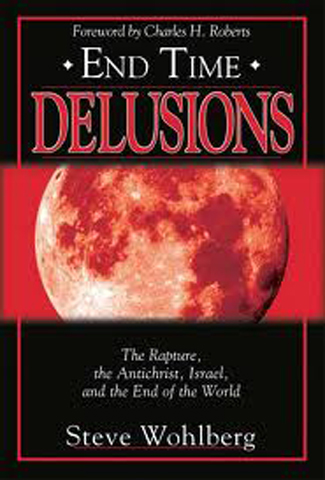 Wohlberg – along with Evangelical heavyweight Millard Erickson – have noted the pre-trib rapture teaching did not gain traction until the mid-1840s. The teaching was popularized by John Nelson Darby (1800-1882) and through his friendship with C.I. Scofield, the teaching found its way into the Scofield Reference Bible. From there, the dispensational view of end time events influenced countless believers and became an official position at many Bible colleges, including Dallas Theological Seminary.

Wohlberg says Billy Graham agrees with his understanding of 1 Thessalonians 4:16-17, considered one of the key verses describing the rapture: “For the Lord Himself will descend from heaven with a shout, with the voice of an archangel, and with the trumpet of God. And the dead in Christ will rise first. Then we who are alive and remain shall be caught up together with them in the clouds to meet the Lord in the air. And thus we shall always be with the Lord.” (NKJV)

“This is one of the noisiest verses in the Bible,” Wohlberg says. “The context shows Jesus comes down with a trumpet, a shout, a voice, and the resurrection of the dead.”

“It’s not describing a silent return of Christ when everyone else is left scratching their heads and wondering what’s happening,” he adds. “This is a big event that nobody will miss.”

Wohlberg sees some potential pitfalls for those who adopt the pre-trib position. “One of the dangers is telling Christians they are going to get out of here and will not be around in the final days.” He worries Christians may develop a complacent attitude and will be unprepared when a storm of tribulation hits the world.

“The immediate context of ‘one shall be taken, and the other left’ (Matthew 24:40) clearly points to the visible return of Jesus Christ with myriads of holy angels, not the mysterious vanishing of Christians worldwide (see verses 27,30,31,35-39). Christians are then changed ‘in the twinkling of an eye’ (1 Corinthians 15:52) ‘at the last trumpet,’ not seven years before it,” he maintains.

Jewish by birth, Wohlberg grew up in the Hollywood Hills and attended North Hollywood High School, where he was “lost in the world of sin.”

But when he began to read the Bible for himself at age 20, the realization of Jesus’ sufferings in the Garden of Gethsemane led him to surrender his life to Christ.

He has become accustomed to positive and negative responses to his viewpoint, including bookstores that initially refused to carry his book.

As Wohlberg surveys the world, he sees a crisis coming. “The planet is breaking down, systems are decaying, we are morally sliding, and the world economy is built on a bubble,” he observes.

“When the crisis comes, humanity will be crystallized between those who follow God and those who follow the devil. Jesus will use us in the midst of the trouble to speak to the human family one last time.”

Steve Wohlberg is the Speaker/Director of White Horse Media (Priest River, ID) and the host of World News and the Bible television broadcasts. Widely regarded by media as an apocalyptic expert, he has been featured in numerous History Channel documentaries (Secrets of the Seven Seals; Strange Rituals: Apocalypse; Armageddon Battle Plan), and has spoken by special invitation inside the Pentagon and U.S. Senate.