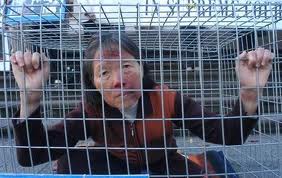 Over 200 police raided a house church on Sunday, September 21, eyewitnesses told International Christian Concern (ICC). More than 100 church members, including children, were arrested during the Sunday service in Foshan City, in China’s Guangdong Province. As of the evening of September 22, more than 24 hours later, 30 parishioners still remain in police custody.

“We don’t know exactly why they raided our church,” a local believer told ICC during an interview. “The government does not want us to get together and worship as a church.” Local believers told ICC that the church was raided without any warning. The police left behind a notice stating that the church members were detained for conducting an “illegal gathering.“
All house churches in China are considered “illegal gatherings” and are frowned upon by the government. Any believers meeting together to practice their faith in house churches risk being arrested. ICC has learned that though 30 parishioners remain in police custody, most church members, including the children, were detained for 10-20 hours and then released.
The Mount Olivet Church of Foshan City, a house church with 170 church members and over 20 years’ history, is located in Foshan City of Guangdong Province. Foshan City is one of the most economically prosperous cities in Guangdong province where Deng Xiaoping’s open door policy was first implemented in southern China.
ICC’s Regional Manager for Southeast Asia, Sooyoung Kim, said, “It is unbelievable that local authorities arrested over 100 church members, including children, in Foshan City. Even though most people have been released, the experience has been traumatizing. ICC urges local authorities in Guangdong Province to respect its citizens’ rights to religious freedom, that the government of China says are upheld, and free these innocent Christians as soon as possible.“
Please pray for the Christians in China as well as their house churches, and for the laws for religious freedom to be upheld and  the persecution to stop. –International Christian Concern