We are living in a world where relationships have become transactional and sexual intimacy equates to money, violence, and power. Exploitation of human beings has sadly become a highly lucrative business for organized criminal groups. It is an illicit market which affects millions of victims worldwide every year.

With traffickers making an estimated $32 billion annually, human trafficking is one of the world’s most shameful crimes and one which objectifies human life and robs people of their dignity and basic rights.

After weapons and drugs, human trafficking is the third most lucrative criminal business in the world – a 32-billion dollars global industry, which is estimated to be exploiting over 2.4 million people, two-thirds of them are women and children.

In 2007, the Ministry of Women and Child Development reported the presence of 2.8 million sex workers in India, with 35.47 percent of them entering the trade before the age of 18 years.

Global index on sexual slavery 2013 reported that 30 million people are enslaved worldwide, trafficked into brothels, forced into manual labor, victims of debt bondage or even born into servitude, and half of the those world’s slaves live in India, now around 15 million in Mumbai alone, being home to 100,000 sex workers making it the largest sex industry center in Asia.

On one hand, India is recognized as a global power with a strong economy, powerful military and deep rooted political capacity, while on the other hand prostitution is currently a contentious issue with child trafficking rampant throughout the land.

While I am writing this I am asking myself, “Is this the cost that our children and women are paying for our country to sustain being a global power?”

According to the National Crime Records Bureau (NCRB), child trafficking is rampant in underdeveloped villages, where “victims are lured or abducted from their homes and subsequently forced to work against their wish through various means in various establishments, indulge in prostitution or are subjected to various types of indignities and even killed or incapacitated for the purposes of begging and trade in human organs.”

I wonder if we have answers, but let’s hear what some experts have to say:

“Socio-economic backwardness is a key factor in child trafficking. Many families are unable to afford the basic necessities of life, which forces parents to sell their children. Some children are abandoned by families who can’t take care of them. Some run away to escape abuse or unhappy homes. Gangsters and middlemen approach these vulnerable children” — Justice J. B. Koshy, former chief justice of the Patna High Court and chairperson of the Kerala Human Rights Commission. 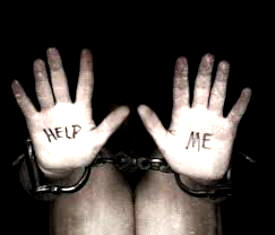 Sreelekha Nair, a researcher who has worked with the New Delhi-based Centre for Women’s Studies, added that parents coming from poor socio-economic conditions in remote villages sometimes readily hand over their children to middlemen.

In its recent report, the Indian Supreme Court said, “Child prostitution is happening because of abject poverty in the country. This is also because of the very high large-scale unemployment.”

In a country that is a home to 1.2 billion people, where half the population lives on less than two dollars a day, families traveling in search of money and food, old women performing back-breaking labor, with all this a simple part of life in India, amidst this rampant destitution, some things still raise red flags, or summon collective cries of fury. Child trafficking is one such issue, and it is earning front-page headlines in states where thousands of children are believed to be victims of the illicit trade.

Child prostitution is growing so rapidly that, even with all the efforts made by different organizations, it just plays a small part. Definitely we feel that we should make a big impact to eliminate and eradicate child prostitution and to ensure every child has a right to her/his childhood, to freedom, to play, to receive education, to have her/ his basic needs of shelter, food and clothing, and above all the right to safety in this beautiful country.

Indian Rescue Mission, an anti-human trafficking organization that I head, rescue children and women forced into prostitution and bonded slavery and help provide access to legal, medical and counseling services to all trafficked survivors in order to restore confidence and self-esteem to help them reintegrate into society. We have chosen to take action right now, to do our part right from rescue to integration within society to ensure these vulnerable children are not re-trafficked.

In my 13 years of service in this field, I have found that some sell their children for amounts that are shockingly worthless, in some cases for as little as 2,000 rupees (about $33 US dollars). Is this the cost of one life? Can we ever put a price tag for human life? In the name of trafficking, innocent lives are bought and sold and resold again and again.

Where does the axe need to be laid? Where are the loopholes?Experts pointed out in a discussion that the implementation of the 1986 Immoral Traffic Prevention Act remains weak. Many believe that since the act only refers to trafficking for the purpose of prostitution, it does not provide comprehensive protection for children, nor does it provide a clear definition of the term “trafficking.”

Dr. P M Nair, project coordinator of the anti-human trafficking unit of the United Nations Office on Drugs and Crime (UNODC) in New Delhi and former director general of police, said that investigations should focus on recruiters, traffickers and all those who are part of organized crime.

“The ‘scene of crime’ in a trafficking case should not be confined to the place of exploitation but should also cover places of transit and recruitment,” he added.

I personally feel that there is a stern need in deterring traffickers and their associates by prosecuting and punishing them and changing national laws to enable such actions. Analyze the various causes of child trafficking and identify opportunities to intervene in order to have a preventive effect. It just does not stop here; we need to have consistent awareness programs in villages, create a support system for women and children, continue to suggest follow up and implement changes in government policies.

Our commitment is to continue to do our part and ensure we act on the cry of our children, to raise our voice for each of them because every child counts.

Our vision, wish, and prayer for every child and woman is to be free and safe. You can be a part of creating this community of love and solidarity! We encourage you to partner and contribute in ways through the abundant resources God has blessed you with your energy, your prayers and your money. Thank you for being a blessing!

To get more information regarding Indian Rescue Mission go to www.indianrescuemission.org or write to us at [email protected]