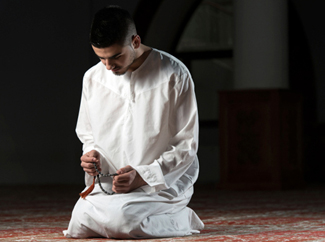 For Claire and her husband, tolerance toward all faiths was one of the highest values imparted in their home – even as they rejected religion of any kind for themselves. So it came as something of a shock when their 16-year-old converted to Islam and began to display troubling attitudes and behavior.

“Two years ago this week, my stepson came home wearing an Arabic black thawb,” writes Claire,* a British woman, in a piece appearing in The Spectator. “He walked into the sitting-room, smiled defiantly at me and at his father, and asked us how he looked.”

Claire and her husband tried to maintain their British reserve and downplay their shock when they replied somewhat weakly that he looked “very nice.”

“Our boy had never shown any interest in religion before he found Islam at 16. We’re atheists, and we raised him to be tolerant of all faiths but wary of anyone selling easy answers,” Claire notes in The Spectator.

Apparently, their son found Islam after he left school. “He was feeling slightly isolated, depressed and vulnerable after breaking up with his first girlfriend, so we were pleased when he began college and some new friends appeared. They were all young Muslim men. Around seven of them would pile into my stepson’s bedroom every evening and we would hear the shouts and yelps of teenage boys amusing themselves.”

Everything seemed relatively innocuous on the surface, but then a prayer mat and textbooks on the Qur’an appeared on a shelf in his room. To their astonishment they realized he had converted to Islam.

They hoped it might be a harmless passing fad, a mere “cosmetic change,” the same as him “going punk or vegan for a few months.” But they were wrong.

“Over the next few months we saw the boy we knew become buried beneath a spiritual totalitarianism,” Claire writes in The Spectator. Suddenly he wanted to know why his stepmom didn’t cook every night, “like a good (Muslim) woman would?”

He went so far as to accuse her of being lazy and irresponsible. He made the comments with a smug smile on his face, which aroused anger and sadness from Claire.

She tried to make light of it, and deflected it with some playful banter. “I tried to take it as a joke, informing him that I had a career that involved more than just having babies. Gradually though, I found myself worn down by his attitude,” she notes.

While their son had no previous interest in politics, when a story popped up about Afghanistan, he unleashed a diatribe that came from his newly acquired perspective.

“He informed us that the problems in the region were the fault of ‘The Jews’; everything bad in the world could be laid at the door of ‘The Jews’. The Holocaust never happened, he insisted, but in the same breath he would say that ‘the Nazis should have finished them off’. ‘The Jews’ had caused the world financial crisis and, of course, ‘The Jews’ were the reason why he couldn’t find work. It was not because he had neither qualifications nor work experience, although that was probably their fault too.”

His worried parents began to see their son as a jihadi caricature of his former self. “We challenged him, thinking reasonableness would see him acquiesce. But we were not dealing with a rational mind. Our Muslim boy would heed no evidence against his argument and neither did he require any evidence to justify his prejudices. He just shook his head at our ‘blindness’, our blasphemous absence of faith.”

“We’d see, he said, the familiar smug smile appearing: it was all in the Qur’an. We should convert before it was too late.”

In addition to his hatred of the Jews, he also began to spew hateful invective against homosexuals, women, and anyone who wasn’t a Muslim man. “Every day we fought, struggled, wept and grieved for the boy. All we wanted was our son back,” Claire writes.

Two years after his conversion, Claire sees a glimmer of hope due to a curious softening in her son’s attitude. “Every day he returns to us a little more. His eyes have light in them again. It’s almost as if he is recovering from some disease. He explains his reversion succinctly: ‘I realized that I was good enough, that I didn’t need to follow someone else’s idea of what I should be.’ He can now take responsibility for his life rather than seeking to blame others.

“He is maturing. He no longer needs the support of a tribe, which is what attracts Muslims from all backgrounds and nations to the idea of jihad. I’ve come to think that it is youth, not persecution or poverty, that these Islamic State groupies have in common, an embryonic sense of identity. For them, blaming America for the world’s problems is the equivalent of shouting at their parents that they ‘never asked to be born.’”

Claire is troubled as she surveys the rise of ISIS. “Every time I hear of another young man who has lied to his family and gone to join the carnage in the Middle East my heart breaks. You can, if you choose to, ignore the problem of the Muslim radicalization of our youth in the mosques and on the streets.”

“It is, after all, so easy to tolerate what does not immediately affect you, and it’s nice to feel that one is liberal about Islam. But the lesson I’ve learnt is that we’re going to have to fight for our progressive democracy, because although you may tolerate Islam, Islam might not tolerate you. When it lives in your house, eats your food, sleeps under your roof, enjoys all the comforts you provide, all the while despising you, then you will be forced to make a choice.”

*Claire is a pseudonym