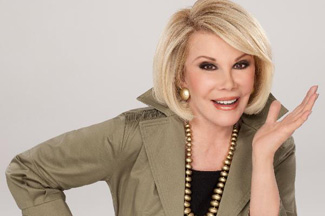 Can we talk? I am not suggesting that Joan Rivers was a Christian. But who knows? What we do know is that Joan professed to be Jewish by race and religion, and that she celebrated the birth of Jesus Christ, the Messiah.

Miss Rivers was known to have said, “Everyone reaches God in any way they want to reach God,” on her reality show, “Joan & Melissa: Joan Knows Best.” She also said, “And let’s not forget, Jesus was Jewish… which made sense because he really loved his mother,” as reported by Antonia Blumberg in the Huffington Post.

Blumberg further quotes Rivers, saying, “I’m at the age where I figure. I’m gonna have a Christmas tree… I got a two-story-high Christmas tree… On the bottom I got the manger, I got the whole thing going there: The wise men, the sheep. The only thing is, I had the baby, but I’m Jewish — I got him a nanny.”

So, here we have a Jewess who was not offended by Jesus Christ and His claims of being the Messiah, but indeed celebrated His life. Miss Rivers represented an era in which it was okay to call America a Christian nation, and to acknowledge Jesus Christ no matter who one professed to be. She did not wear her beliefs on her sleeve. She simply lived out her beliefs, whatever they were, and did not care what anyone else had to say about it.

Coming from the era of the holocaust, a time when Jews had no homeland, it was customary for Jews of Europe and Russia, where her parents were from, to adapt and take on the customs of the culture in which they found themselves for their own survival.

Miss Rivers was alienated from the Anti-Defamation League due to unacceptable humor she unapologetically shared about Jews, Germans, and the holocaust during a standup comedy routine. In her defense, she said, “My husband lost the majority of his family at Auschwitz, and I can assure you that I have always made it a point to remind people of the Holocaust through humor,” as reported by Sam Webb in Britain’s Daily Mail.

She presented humor about people of every race, religion, and walk of life.

Miss Rivers was not known for having polite humor. Not many successful comedians do in secular venues. However, she made it to the top in a male-dominated world of comedy.

She was at her happiest making other people happy. In an interview with the Associated Press in 2013, she said, “The trouble with me is, I make jokes too often” (www.theblaze.com/stories/2014/09/04/comedian-joan-rivers-has-died/). “I was making jokes yesterday at the funeral home. That’s how I get through life. She went on to say, “Life is so difficult. Everybody’s been through something. But you laugh at it, and it becomes smaller.”

Miss Rivers was admitted to the hospital one week ago after going into cardiac arrest following a routine procedur e while visiting a medical doctor in Manhattan on August 28. One week later, on September 4, 2014, she passed away at Mount Sinai Hospital in New York. The New York state health department is investigating her death.

Born as Joan Alexandra Molinsky on June 8, 1933 in Brooklyn, New York, Miss Rivers was of Jewish-Russian descent. Her parents, Meyer and Beatrice Molinsky, were Russian immigrants. Her father was a doctor.

Joan was an overweight child and allegedly used make-believe to escape her reality until she lost the weight. She was known by her stage name, Joan Rivers. She was an actress, comedian, writer, producer, and television host, best known for her stand-up comedy. Her first husband was James Sanger whom she married in 1955. The marriage lasted for less than one year. Her second husband was Edgar Rosenberg, who she married in 1965. He allegedly killed himself after the failure of Miss Rivers’ talk show, The Late Show, which he produced. She had one sibling, Barbara Cushman Waxler, and is survived by her daughter, Melissa Rivers.

In that 2013 interview with the Associated Press, hard-working Joan Rivers said, “You never relax and say, ‘Well, here I am!’ You always think, ‘Is this gonna be OK?’ I have never taken anything for granted.” Nor should Christians take anything for granted any longer. We need to unabashedly stand up for Christ and, like Miss Rivers, be ourselves.

When it comes to religious expression, use it or lose it.