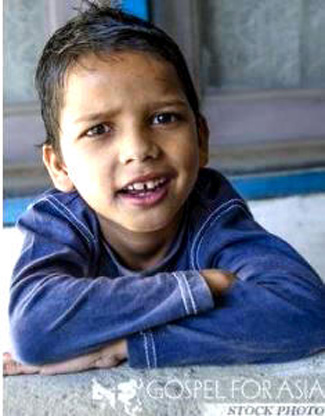 When a young Hindu couple discovered their four-year-old had leukemia, their first instinct was to visit the temple and seek healing from their many gods and goddesses. But when his condition got worse and they had no money to pay the hospital, they found a Great Physician who brought healing.

“In December 2012, Taizeen was affected with a sickness and was bedridden,” reports his father, Jagesh, 35. “Since we believed in the healing power of the gods and goddesses, we first took my son to temples. But even after visiting many temples, there was no improvement in my son.”

A month later they took Taizeen to a hospital and received an official diagnosis – their young boy was suffering with leukemia. But they were shut out of the medical establishment due to their lack of means. “We learned from the doctors that the treatment for my son would cost more money than we could afford because we are poor,” Jagesh recounts.

Feeling distraught and not knowing where to turn, they happened to run into a woman at the hospital who is a Christian. She told them that Jesus is a wonderful healer, a Great Physician. She urged them to listen to a radio program broadcast by Gospel for Asia (GFA).

Out of curiosity, Jagesh tuned into the program one January morning. As he listened, he got more and more excited by what he heard. He called out to his wife and son to come and listen.

“At the end of the message, while the producer was praying for the sick, I and my wife and my son joined along with him.”

A seed of faith welled up in his heart. “I developed a belief that surely Jesus would heal my son, so I made a phone call to the number I received through the radio. As I called, the person in charge of GFA Radio follow-up received my call, and I shared our situation with him over the phone and requested him to pray for my son.”

Jagesh and his wife were amazed as their son’s health immediately began to improve. “Within a few weeks of time, he started to walk, play with his friends, and eat food. Again, we took him to the hospital for a checkup, and he was found cancer-free after the diagnosis.”

“God miraculously healed my son. We praised God for that, and we decided to follow Jesus. Daily, we are praying to God, and this is our desire: that we will serve the Lord Jesus. Now we are attending a church nearby.”

“Please pray for my son continuously, and also pray for our family.”