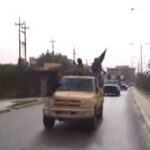 The stunning victories by ISIS (Islamic State of Iraq and Syria) in Iraq have left thousands of broken lives in its wake.

According to a story by CBN News, its Middle East Bureau Chief Chris Mitchell visited a refugee camp erected just a few days ago. It’s one of many U.N. refugee camps set up in a region where literally hundreds of thousands of displaced people are living.

This camp is about a 15 minute drive from where ISIS forces are operating. Most of the people here are from the city of Nineveh, and many of them — men and women, boys, and girls — have seen the worst of the fighting.

“I saw people without heads on the street and people who have been killed in the streets,” CBN News reported one resident said.

“I saw this with my own eyes,” Sha’alan Abdulwahab, an Iraqi man who served Iraqi intelligence, told CBN News.

He added, “When they (the jihadists) got into Nineveh, they entered the houses and killed whole families. This means they don’t care about the ages or the humanity. They only care about themselves.”

That carnage drove these people to take shelter together in refugee camps. Many declined to be interviewed by CBN on camera because they expect to return to their homes.

CBN News said others, even some young teenage girls, said ISIS would kill them if they went back. Now they have to adjust to another life.

“In the region, according to the government, they said there were 100,000 coming to Erbil and 500,000 IDPs (refugees) across the country,” camp manager Simon Ravelli told CBN News.

He added, “But this is a real serious crisis and a challenge for all of Iraq. We, as an international organization, are here to support everyone who is in need in this crisis.”

The people need help. The camps reduce life to the basics: People need water. They clamor for ice. Kids cool off in the 100 degree heat. People fight boredom. Yet they survived the butchery of ISIS.

According to CBN News, Sha’alan said he had interviewed captured ISIS soldiers who revealed the terror group’s long-term agenda, which goes beyond Iraq.

“We know that ISIS is not dreaming just to rule over Iraq, but they are dreaming to go to Europe and rule over all of the European continent. And, if I’m allowed to say, ISIS is dreaming to rule over the whole world,” he said.

CBN News said the ISIS agenda and this refugee camp are just two of the signs that Iraq and the Middle East may never be the same as before.

Please pray the people and the government of Iraq. –ASSIST News