No one guessed little Giselle had a heart problem until a routine doctor’s check-up at seven months old. But her short, joy-filled life ended with visions of Jesus and heaven, a comfort to those who loved her most.

“I don’t know why Giselle was born this way,” says Tamrah Janulis, Giselle’s mother. “That’s one of the questions I will ask God.”

At seven months, doctors discovered a congenital heart defect known as tetralogy of Fallot, the most common cause of blue baby syndrome. Tamrah and husband Joe were completely surprised when doctors informed them that Giselle lacked a pulmonary valve and arteries.

“I thought there was nothing wrong,” Tamrah recalls. “I wasn’t prepared. I was at the hospital and my world completely stopped. I was in shock, speechless.”

Some medical experts said Giselle — the youngest of four children — could live to be 30, others said she should not be alive at all.

Two months later, doctors performed heart surgery and discovered the connections between Giselle’s heart and lungs looked like “a bowl of spaghetti” or “a bird’s nest,” with small thread-like veins that had sprung up, attempting to compensate for the missing arteries.

After this surgery, experts recommended a variety of additional surgical options, some rare procedures considered risky.

Tamrah and Joe decided against further surgeries, but followed doctors’ prescriptions for a litany of medicines. “I gave her meds every other hour and shots twice a day,” Tamrah says. “I carried her everywhere and never let her out of my sight.”

A bright child, Giselle learned the alphabet at 10-months-old. “Nothing stopped Giselle,” Tamrah says. “She loved going to the zoo. She rode horses with me. She did everything.”

“We’re a very musical family and Giselle was always singing,” she adds.

As the months went by, Giselle’s hands, feet, and lips began to exhibit a slight bluish hue, telltale signs her heart 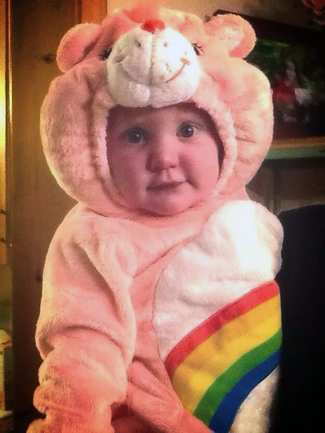 was not working properly.

After her second birthday, she had her first vision of Jesus. It happened in their family room, only a few weeks before her passing.

“What do you see, babe? Tamrah asked.

“Right there,” she pointed.

Giselle had at least two more visions of Jesus in the weeks before her graduation to heaven. One happened in the car while they were driving and another in a store.

One day in the car, Giselle began to spontaneously sing, “Rejoice! Rejoice! (E)mmanuel…” She had not learned to pronounce ‘E’s’ so it came out as ‘Manuel.’

“How does Giselle know that Christmas song?” sister Jolie Mae wanted to know.

According to Tamrah, Giselle had never heard the hymn before. Also, in the weeks leading to her passing, she would suddenly begin singing “Hallelujah” as she walked around the house.

Cindy Peterson, Giselle’s grandmother, believes the veil between heaven and earth was pulled back slightly, in preparation for her ascent to heaven. “She had a foot on earth and a foot in heaven,” Cindy believes. “She was joining with the worship in heaven.”

A week before her passing, Giselle was lying in bed, not feeling well. As Tamrah studied her daughter’s face, Giselle pointed up at a corner of the ceiling. “Hey horsey. Hi,” she said.

She also pointed to a “kitty cat” but Tamrah is convinced she saw a lion, a glimpse of the wondrous menagerie of creatures inhabiting heaven.

“She was getting weaker and weaker,” Tamrah says. “Her hands and feet started tingling and the tissue started dying. Her feet, hands and lips were increasingly blue.

Little Giselle left this world March 24th, in her mother’s arms, at home. Joe was embracing both mother and daughter on their king-sized bed.

In the minutes before her home-going, Giselle let out a soft wail. Joe thought she was crying because she was going to miss her family.

“My miracle is that she lived as happy as she did,” Tamrah says. “Every day with her was like a miracle to me.”

“It gives me hope that she saw the Lord and she is in heaven with Him. I know she is up there and she is waiting for me.”

The song below was written and sung by Tamrah, accompanied by Joe

For the Burpo family, heaven is for real