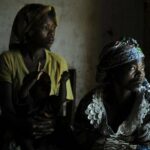 In 1992, during its war against South Sudan, Khartoum declared a jihad against the ‘rebellious’ Nuba: the African tribes of the north’s Nuba Mountains who, along with the southerners, were resisting Islamization and racist Arab supremacy. A government-sponsored fatwa legitimized the jihad by labeling Muslim ‘rebels’ as ‘apostates’ and Christians as “kaffirs”  (infidels/unbelievers) standing as a bulwark against the spread of Islam, and affirming that “Islam has granted the freedom of killing both categories”.

Reporting on the situation across Sudan’s new south — Abyei,  South Kordofan and Blue Nile — Dr Mukesh Kapila, the former U.N. Humanitarian Coordinator in Sudan laments: “The ethnic cleansing is largely complete. . . . Rebel areas are depopulated and largely empty”.  He says that in Blue Nile, some 450,000 people have been affected with fields and villages being razed as Sudanese radio calls for the region to be “combed” and cleansed of Africans who are de-humanized as “black plastic bags”.  He reports that in South Kordofan, where soldiers have been ordered to “‘sweep out the trash”  (i.e. the Africans) and “eat them alive”,  displaced families have retreated to remote cave networks where food is scarce. While many are determined to remain, saying: “This is our country,”  others are simply too weak to attempt the long trek south. It is a journey that is itself incredibly dangerous, for Khartoum wants the Nuba not just gone, but dead — unable to return. A delegation from HART (Humanitarian Aid Relief Trust) recently confirmed that on 12 December 2012 1700 civilians from Ulu Payam (Kirmuk County) left for South Sudan, only to be attacked en route by SAF (Sudan Armed Forces) ground troops. Many were killed and many children scattered, with only 700 of the original 1700 arriving in Maban, South Sudan.

Dr Kapila adds:  “What I’ve seen in the Nuba Mountains and Blue Nile is all that I’ve seen in Darfur, plus the addition of modern technology. Ten years after, we have precision guided missiles, land mines which I don’t remember seeing in Darfur, anti-personnel bombs, cluster bombs which I did not see in Darfur, we see MIG fighters which I don’t remember seeing in Darfur, and we have a much more precision on-guided approach with distance over the horizon artillery. So this is not just another Darfur; quite possibly, it is worse than Darfur“.

Human Rights Watch estimates that a total of 900,000 African (non-Arab) Sudanese are now affected. Having razed the farms and villages, the regime maintains a blockade on humanitarian aid, using starvation as a weapon of mass destruction. This has long been the regime’s preferred method of mass killing: engineering a famine and just waiting as the population turns skeletal and quietly drops into the dust. Khartoum has a long history of this type of warfare. Indeed President Omar el-Bashir has perfected mass murder and his conscience is untroubled. Despite this, the U.S. administration has assured Khartoum that it is not seeking regime change but rather normalizing relations. This is because the US believes friendship with Khartoum is in its geo-strategic interests on the spurious grounds that it thinks Khartoum could be helpful in the fight against terrorism. In truth, the West’s interests would be better served if it feared the LORD!

Bishop Andudu Adam Elnail of the Anglican Cathedral in Kadugli only survived the ethnic-cleansing of Kadugli (the capital of South Kordofan) because he was receiving medical treatment in the U.S. when Kadugli was invaded and ethnically cleansed in June 2011. This week Bishop Andudu and Dr Kapila will attend the African Union (AU) Summit in Addis Ababa to lobby for action to end the suffering in Sudan’s ‘new south’. They have identified Friday, January 25, 2013 “Heads of State meeting on Sudan” day as a key test of the A.U.’s ‘credibility’. Bishop Andudu is praying the A.U. will soon take action and send humanitarian aid, implement a ceasefire and send a delegation to the conflict areas. “That [would] be very helpful”, he said.

In 1913, the newly formed Sudan United Mission (S.U.M.) of Australia-New Zealand began sending pioneer missionaries into the Nuba Mountains. The first “Sudanese Church of Christ in the Nuba Mountains” was planted in 1914. By 1936 there were 33 Australian and New Zealand S.U.M. missionaries working in the Nuba Mountains alongside others who had arrived from various missions (in particular the Church Missionary Society) and others from the U.S.A. After Sudan became independent in 1956 under a repressive Muslim, Arab government, the missionaries, sensing their time was limited, redoubled their efforts in Bible translation. By the time the missionaries were forced to leave in 1962, Australian S.U.M. (now Pioneers) missionaries had translated the New Testament into five Nuba languages. Today the Nuba are predominantly Christian. Germany, the USA, New Zealand and particularly Australia, all have strong spiritual ties to the people of the Nuba Mountains. May this centenary year be the year the battle is turned back.  Remember – our struggle is not primarily against flesh and blood. (Ephesians 6:12)
PLEASE PRAY, SPECIFICALLY THAT THE LORD OF HOSTS WILL: