Life Magazine called him one of the top five test pilots in the U.S. His illustrious career extended into his eighties, well beyond the time most retire from the grueling physical demands of high-performance jets.

“I knew what I wanted to be at the age of five,” says Russell O’Quinn. As a child during the Great Depression, his father decided to re-roof their house, which was under the final approach to a local airport.

Since Russell’s mother was away, his father decided on a creative way to look after the lad while he worked. “He took a hammer and nailed the seat of my pants to the roof,” Russell recalls. “A 10-penny nail is a very effective babysitter.” He spent an afternoon watching airplanes fly overhead, which began his love affair with flying.

As a teen, he begged his parents to allow him to take flying lessons, but they were afraid of aviation and refused. When Russell got a job at the airport as a “grease monkey,” he worked out a clever trade. He received free flying lessons on Saturday mornings in exchange for work. He promised his parents he wouldn’t spend any money on flying lessons and he felt that kept him honest. 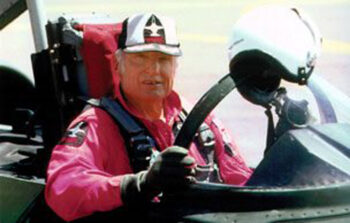 At age 16 he got his pilot’s license. “The mistake I made was the day I got my license I decided to celebrate by buzzing the house,” he recalls. “Somehow my parents knew who that was.” Grounded for six months, he continued to press the issue with his parents until they relented and allowed him to continue flying.

A Hollywood movie, “Test Pilot,” starring Spencer Tracey, Myrna Loy, and Clark Gable made a big impression and planted a seed for his future course. “I went to see that movie 100 times,” he estimates, but he wasn’t sure how to achieve his goal.

Then he heard about the National Aerobatic Contest held each year, where the best aerobatic pilots displayed their skills. “I figured if I could get good enough to compete, that would be a major stepping stone into aviation.” Russell began to train and practice advanced aerobatic maneuvers. But, one day his father happened to drive his car underneath one of his aerobatic displays and he was grounded again.

After Russell graduated from high school, he stayed with relatives in Oklahoma during the summer. “I had one weird aunt who did strange things like read her Bible in front of everyone and pray out loud before she ate meals,” he says. She also attended church several times a week, which seemed odd to the young man.

“My parents were fine moral people, but there wasn’t time for church in my family,” Russell notes. “We went to church maybe once a year. This made this woman terrifying to me.”

“I was afraid someday she was going to corner me and pour religion down my throat,” he adds. “Years later I discovered she was much wiser than she was weird.”

Russell stayed as far away from her as possible, but one day she cornered him with some advice. “If you want to amount to anything in your profession, you should go to college and get an aeronautical engineering degree,” she suggested.

Then she dangled a carrot. “If you go to college, I’ll pay the first year’s room, board, and tuition.”

It was an offer he couldn’t refuse, but he didn’t realize she had already selected a small Christian college in the Ozarks as part of the deal. After he got into his dorm room, he went out to explore the campus. “As I was walking along I ran into a bunch of nuts carrying Bibles,” he recalls. “Then I knew my aunt betrayed me and I had fallen into a hotbed of religion.”

But by 2:00 a.m. he found at least a dozen other young men who had been “conned” into attending Christian school. “Instead of leaving, we decided to form a club and see what kind of devilment we could create.”

His aunt made one critical mistake in her plan. She gave Russell the entire year’s college money in advance. He discovered he could buy a war surplus army training aircraft for about half of what his aunt gave him in cash. He bought the airplane, paid the first half of his college expenses, and decided to “let the second half worry about itself.”

The college had a small, unused airstrip at the foot of the campus, which Russell decided to put to good use. However, buying the fuel for his plane with his remaining funds didn’t fit into his plan. As he began to run short of cash, he modified the engine of his plane to run on automotive fuel. With help from his friends in the club, they siphoned gas from roadwork vehicles that sat unattended on weekends.

Russell held off as long as possible from taking a required class at the school – Bible. With 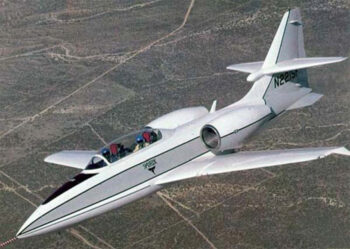 a push from the professor, he enrolled and sat in the back. After a few weeks, he received an invitation to the professor’s home for dinner.

“I was nervous but I could tell he cared about me,” Russell says. “He took time from his busy schedule to talk to me, so I decided to listen.”

After dinner, they began to talk in the professor’s study. “Sooner or later you will take a course that deals with the origins of the universe,” the instructor began. “After studying these subjects years ago, I came to the conclusion there are only two basic premises behind them. One holds there was a cataclysmic explosion eons ago and through a theory called ‘evolution’ everything that is about us came to be. The other holds there is an almighty, powerful God who created the heavens and earth and everything in them.

“As I studied the sciences and saw the design, creativity, cohesiveness and power, I came to the conclusion somebody had to be behind all this,” he added. “I became aware of a word that describes evolution, and that word is ‘accident.’

“I could not reconcile what I learned in the sciences with the word accident, so I began to believe there is a God,” he said.

Then the professor began to talk about Jesus, someone Russell had only known in a profane way. “He explained how Jesus Christ performed a work so matchless it allowed a way for man to find his way back to God,” he concluded.

As the professor walked Russell to the front door he said, “I want you to know my wife and I care about you and we’ve been praying for you.” The remark struck a note, because Russell didn’t know anyone had every prayed for him before.

He pondered the professor’s words in his heart, but continued his dual educational pursuits – flying, along with his regular studies, trying to stay a step ahead of the campus authorities.

One of Russell’s friends got interested in flying, and Russell began to train him. When he became proficient in the aircraft, the day arrived for his friend’s first solo flight. “We inspected the aircraft,” Russell recalls. “I helped him on with his parachute. I watched him strap in and go through the start procedure.”

Russell tapped his friend on the shoulder, then got off the wing and watched him taxi away. Once in the air, his friend attempted an aerobatic maneuver he watched Russell perform in the past. “At about 500 feet he lost control of the airplane, pitched over, and drove straight into the ground at about 150 miles per hour.”

It was an awful spectacle to witness. “I had never seen death before,” he says. “It hit me like a runaway freight train that I was responsible. I’ll never forget that day.”

Nothing in Russell’s past had prepared him to deal with a tragedy of this magnitude. “For death I had no answer whatsoever.”

He went back to his room, locked the door, and got down on his knees. “I didn’t know how to pray, so all I could do is cry out, ‘God, what’s happened to me today is too great for me to bear.”

Then he remembered a formal prayer he heard in his professor’s class, which he repeated. “Oh God, be merciful to me a sinner and save me for Jesus Christ’s sake.”

In that moment of surrender, Russell was born again. “The next day I had a sudden desire to begin studying the Bible, which was a miracle,” he notes.

Russell was able to overcome the tragedy and graduated from college. He served in the U.S. Air Force and later joined Douglas Aircraft and became their representative on a classified Reconnaissance Jet Bomber program based in Japan.

After leaving Douglas, Russell established the first civilian flight test company in the U.S. He acquired a fleet of jet fighters and used them to provide flight test programs for the aerospace industry and the Department of Defense. The news media referred to him as the “owner of the world’s 14th largest jet air force.”

At the request of the U.S. State Department, Russell headed a U.S.food airlift to Biafra during the Civil War in Nigeria and another relief effort in Bangladesh.

More recently, he designed and developed a new concept tactical jet fighter. As an octogenarian, he became one of the world’s oldest test pilot still flying high-performance jet aircraft. He has been a guest on the “Today Show” and many other network programs. Russell and his wife, Mary Alice, live in Southern California near Edwards Air Force Base.

“God performed a miracle in me,” Russell declares with gratitude. “God changed my life. He allowed me to achieve every dream I had as a boy, and then some.” 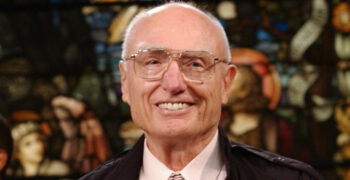 “Before ever lifting an experimental jet fighter into the air, I carefully go through a detailed check list. I challenge you to go through a checklist of your life and ask if you have ever received Jesus Christ as your Savior.