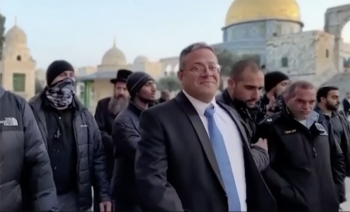 Israel’s new National Security Minister Itamar Ben-Gvir stirred controversy with his 15-minute visit to Jerusalem’s Temple Mount on January 3rd, upsetting some world leaders to the extent that it will be the subject of a U.N. Security Council meeting this week.

The Temple Mount is the most sensitive piece of real estate in the world, containing the Al-Aqsa Mosque, the Dome of the Rock, and the former site of the Jewish people’s Second Temple.

A Jordanian religious institution, the Waqf, currently oversees the Temple Mount. Officially, Jews and Christians are not supposed to pray on the site, and there are restrictions during visits by non-Muslims.

Ben-Givr has been a longtime proponent for Jews being able to freely visit and pray at the Mount. He declared on the campaign trail his intent to change the status quo preventing them from doing so.

The newly installed minister seemed to inflame the situation by tweeting a photo of himself on the Temple Mount, noting: “The Israeli government of which I am a member will not surrender to a vile organization of murderers. The Temple Mount is open to all and if Hamas thinks that if it threatens me, that it will deter me, they had better understand that times have changed. There is a government in Jerusalem.”

“The Israeli government won’t capitulate to a murderous organization, to a repugnant terrorist group,” he said, during the course of his visit, referring to Hamas threats. “The Temple Mount is the most important place for the people of Israel. The Temple Mount is open to all — Muslims, Christians and, yes, Jews too. Jews too. There won’t be racist discrimination in a government in which I am a member. Jews will ascend to the Temple Mount.

“We maintain freedom of movement for Muslims and Christians, but Jews also go up to the site, and those who make threats must be dealt with, with an iron fist.”

Palestinians believe all the Temple Mount is a sacred Islamic site and are firmly opposed to any Jewish worship there. None of Israel’s government ministers have visited the Mount in recent years.

On the same day as Ben-Gvir’s visit, Raphael Morris, one of the advocates for rebuilding the Third Temple, wrote to Ben-Gvir, asking that he direct the police to allow the renewal of the Passover sacrifice this year on the Mount, “as soon as possible,” so that preparations can be made…“there is a golden opportunity to restore past glory,” he wrote, according to a report by Haaretz.

In previous years, Morris and his friends have attempted to approach the Temple Mount previously with a sacrificial animal and have been apprehended by police before entering the Mount.

However, this year, the minister in charge of the police (Ben-Givr) was formerly the lawyer who represented Morris after previous arrests. “It is unacceptable that people should be arrested merely for trying to practice the commandments of the Jewish religion,” then attorney Ben-Gvir said following Morris’s 2017 arrest.

In 2023, Passover will coincide with the second week of Ramadan, which may aggravate any provocative actions by Morris or others.

Hamas responded to Ben-Givr’s visit by saying that “the crime of the fascist Zionist minister Ben-Gvir in invading the Al Aqsa Mosque is a continuation of the aggression of the occupation against the holy places. Al Aqsa Mosque was and will remain Palestinian, Arab and Islamic, and no fascist person can change this fact.”

The Palestinian people “will continue to defend the holy places… and cleanse them of the filth of the occupation. This campaign will not stop until the final victory of our people and the expulsion of the conqueror from all our land,” the statement continued.

(It should be noted that Ben-Givr did not enter the mosque or approach it during his visit.)

The Palestinian Authority also condemned the visit, describing it as an “unprecedented provocation,” according to JNS.org.

“Netanyahu bears responsibility for this attack on Al Aqsa [Mosque],” the P.A. Foreign Ministry said in a statement. Any changes by Israel to the status quo at the Temple Mount would be a “declaration of war with serious consequences for everyone.”