Growing up in St. Louis under remarried parents, Rocky, half Sicilian, had one half-brother and three half-sisters. Because his dad was excommunicated from the Catholic church for his divorce, Rocky attended church sporadically.

He was a straight-A student who got into a lot of trouble in the public school (he started drinking at 13), so his parents moved him to an expensive private Catholic school, a strategy that didn’t help much. He graduated early because of some shameful things he told a teacher with cancer.

“They passed me a year early because I was so bad,” Rocky says on the Virginia Beach Potter’s House podcast. “I said some things to her that I was just in a bad state in life.”

At the University of Missouri-St Louis, he drank his way to failing grades and decided to drop out and join the Navy, at the urging of a fellow sporty friend, with the aim of becoming a SEAL.

He never became a SEAL because he fell in love and married a woman named Ingrid in the Presidential Honor Guard. He viewed the Honor Guard as a stepping stone to his goal. Ultimately, he abandoned the SEAL dream at the warning of his friend.

“All these (SEALs) guys are divorced,” Joe told him. “I don’t know if this is going to be good for you.”

As a secondary plan, Rocky wanted to work his way into the CIA, FBI, or Secret Service. At the top of his class in A school, he got his pick of ships and opted for the Kearsarge, which wasn’t to deploy for 1 ½ years — after he planned to leave the Navy.

But when he reported for duty Jan. 6, 2002, he was hit with shocking news. They would leave on an unscheduled deployment in three days. At the time, President Bush was accusing Iraq of secretly building weapons of mass destruction, and the Navy was getting into position for possible action. His wife was stationed on the USS Eisenhower, so they were apart.

“We literally didn’t see land for the entire 6 ½ months except for two days,” Rocky remembers. “I got really depressed. Eating habits went away. I stopped working out.” 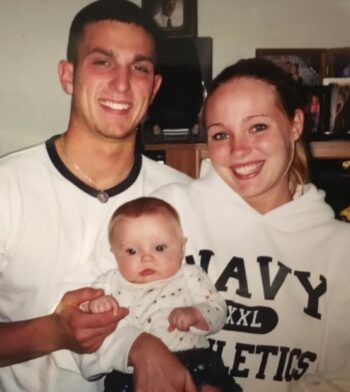 So, he did something he never had done. He prayed a non-ritualistic prayer, a sincere heartfelt plea: “God, if you can get me home for the 4th of July, I’ll quit drinking, I’ll quit smoking, I’ll live like a priest,” he implored. “That’s what I thought God wanted.”

The next day, the amphibious assault ship’s chief petty officer announced over the public address system: “Somebody else took our spot, and we’re going to head home. We’re going to be home on the 3rd of July.”

Rocky went up to the deck, threw his cigarettes and chewing tobacco overboard and marveled how God had moved an entire ship due to his tiny prayer. He didn’t know the scripture about the mustard seed of faith yet.

He promised to nix his vices, a pledge he wasn’t able to keep.

He was ecstatic to see his wife.

“We were happy to be back together. It was like I was dating my wife for the first time again with butterflies in the stomach,” Rocky recalls. “My daughter turned one while I was gone. She didn’t even know me.”

While Rocky was at sea, his wife, Ingrid, had started attending church, weeping in her seat over her sins. Everything seemed to be leading toward the two of them beginning a new life with Jesus.

But that didn’t happen.

“You know how it is when you get comfortable, you forget your covenants?” Rocky explains. “It only took a couple of weeks, and I was back into drinking and smoking.”

Weeks later after drinking one Saturday night, “out of my mind, I started accusing her of cheating on me,” Rocky says. “I put her up against the wall.”

Suddenly, he realized his course was charted for destruction.

“We need to go to church tomorrow,” she told him.

Familiar with Catholic church architecture, Rocky felt like the storefront church in Norfolk, VA, wasn’t even a church. When the sermon got going, so did the Holy Spirit’s conviction. At the end, the pastor appealed to sinners to receive Jesus, as everyone bowed in prayer.

While his wife’s hand shot up to signify she wanted to receive Jesus, Rocky’s pride inhibited him. After minutes of continued exhortations, he finally broke down. “Who cares what these people think?” he reasoned. “This is it. You let down your pride or you walk away from here and continue down the road to failure.”

Immediately church became a part of his life, but he didn’t immediately stop smoking and drinking. That took three months.

The church exploded with revival through the years he began to grow in his faith.

In 2006, Rocky was named a pastor to launch his own startup church just outside of Washington D.C., an assignment he labored in until 2014 when he transferred to Myanmar to become a missionary.

After 3 ½ years, he got kicked out Myanmar, an authoritarian Buddhist nation currently undergoing a civil war. Rocky returned to his original church to take over as pastor. It’s now in Woodbridge, VA, on the outskirts of Washington D.C.

Rocky and his wife have three kids, including Allison, adopted in Myanmar.