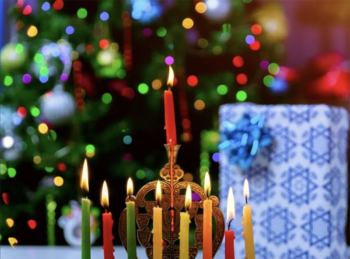 Christmas is a Jewish festival. You might need to read that again if you haven’t already fallen off your chair.

It was the claim made last weekend by Jerusalem-based Rev Aaron Eime, who is well-versed in Hebraic traditions and has studied with rabbis for many years.

In his talk, given as part of a UK tour on behalf of the Church’s Ministry among Jewish people (CMJ), he actually demonstrated how both Hanukkah and Christmas are Jewish feasts, an idea likely to send shockwaves around the Judeo-Christian world. But stay with me, because it makes a lot of sense.

Perhaps the most surprising claim is that December 25th – long thought to be a date picked out of a hat to celebrate Christ’s birthday or, worse, to chime in with pagan festivals – was deliberately chosen as quite possibly the right day.

In any case, in deciding on when to mark the incarnation of Christ (i.e. when God took on human flesh), Jewish followers of Jesus, who of course made up all the first disciples, reckoned they already had a suitable feast – Hanukkah.

Also known as Chanukah, it was all about restoring light to a dark world through the re-dedication of the temple, which took place on the 25th of Kislev (or December in the Gregorian calendar).

And Aaron assures us that there is plenty of evidence to suggest that Jesus was born on that day – yes, really!

It makes sense because Jesus is the perfect embodiment of the temple restoration; he referred to himself as the temple that would be raised up on the third day.

The Hanukkah menorah that is said to have kept on burning miraculously for eight days with only enough oil for a day was surely a picture of the ‘light of the world’ (John 8:12) who had come to rescue his people from their sin and waywardness just as the Maccabees had done less than two centuries earlier.

There is also a Jewish tradition that godly heroes die on the same day they were born. Moses, they say, went to be with the Lord on his 120th birthday.

In Jesus’ case, Aaron suggests, there is evidence that he was conceived at Passover – and, of course, he died at Passover. Which means that it was highly probable that he would indeed have been born ‘in the bleak midwinter’ (as the carol goes) – not at Tabernacles as many, including myself, have believed.

Some argue that the shepherds would surely have not been out in the cold with their sheep, but they are obviously not farmers!

Chanukah is a beautiful picture of how God brings light out of darkness; in fact, God often uses the very cause of the darkness to be the bearer of light, as with Bathsheba who continued the line of Messiah in spite of the fact that everything was wrong with the relationship that produced the child.

In the case of the tyrant Antiochus Epiphanes IV ruthlessly imposing Greek culture on the Jewish people, it led ultimately to the shocking blasphemy of sacrificing a pig on the temple altar – on the 25th of Kislev – the same day the temple was re-dedicated a few years later!
Satan did his worst but, through the godly Maccabees, God turned it into triumph. The cross may seem to have been the devil’s doing, but God meant it for our good and Jesus rose victorious.

Aaron concluded his talk by saying: “There is nothing pagan about Christmas. It’s all about the redemption and birth of the Messiah. You can celebrate Christmas, and you should.”
(Aaron quoted sources including the Didache, a collection of early Christian writings, as well as the Gospel of James and the books of the Maccabees – part of the Apocrypha which, though not regarded as inspirational Scripture by Protestants, is nevertheless accepted by 400 million Orthodox Christians.)

Hanukkah is also a great reminder to Jewish people that God has their back, especially when a faithful remnant is prepared to make a stand for him. For example, it was in December 1917 (again, around the time of Hanukkah) when the Ottoman forces surrendered Jerusalem to the British, thus preparing the way for the modern state of Israel.

And it’s happening again in Britain today with the announcement that a cross-party group of MPs and peers is launching an investigation into the BBC’s coverage of Jews and Israel.

The probe comes after a Jewish Chronicle petition calling for an inquiry attracted over 10,000 signatures. It followed media watchdog Ofcom’s ruling that the BBC failed to observe its own editorial guidelines when reporting an antisemitic attack in London’s Oxford Street last Chanukah.

Jesus himself attended this festival, and it was there in the temple courts that his opponents threatened to stone him for blasphemy in view of his Messianic claims to divinity (John 10:22-39).

On one occasion, Jesus said that the temple would be destroyed, but would be raised again in three days (John 2:19), implying that his own body would replace the temple.

George Frideric Handel, for one, had a ‘handle’ on what it was all about. He was so inspired by the gospel he believed that, in 1741, he wrote one of the greatest ever musical compositions – a 260-page oratorio on the Messiah written in just 24 days, gloriously portraying the wonder of Him who’s coming was prophesied throughout the Tenach (Old Testament).

Or as modern composer Stuart Townend has put it: “What a Saviour, what a friend, what a glorious mystery; Once a babe in Bethlehem, now the Lord of history.”

Our late Queen loved to quote this, and you too can give Jesus your heart!