To get to some of the most remote Liberian villages, a native missionary walks seven hours through the jungle.

“Sometimes we encounter mosquitoes, snakes or lions, among other animals,” the unnamed missionary told Christian Aid Mission (CAM). “We get sick. Idol worshippers sometimes threaten us, saying that if we don’t leave their village, they will kill us.

“We have to contend with all of that relying on God, the author and finisher of our faith.”

His willingness to endure hardship to bring the gospel to the unreached shows the value of “native missionaries” – locals who carry out the Great Commission to their nation. As a general rule, they are willing to suffer more than foreign missionaries and have the capacity to reach more people.

“In some places we go, there is nowhere to sleep; we just lie on the dirt floor,” says the unnamed ministry leader. “There may be no good, safe drinking water or light. When the battery in the flashlight I carry is finished, there’s nowhere to get additional light at all. There are no shops or stores in the jungle.”

In Liberia, 43% of the population follows an ethnic religion. About 40% are Christian, 12% of which is evangelical. Islam holds 12%. 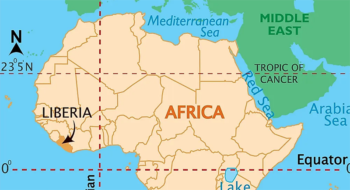 But the labors of native missionaries are improving those statistics. Within a recent six-month period, the missionary and team led 270 people to confess their belief in Christ, the report says.

One recent convert formerly had lived like a prodigal. As a young girl, she wasted most of her life abusing drugs, alcohol and smoking.

“When I shared the gospel with her, I told her the story of the two sons in Luke 15, then I told her, if you will only believe in the Lord Jesus Christ and ask Him to forgive you, He will. Without hesitation, she immediately accepted the Lord Jesus, and she was baptized and is serving in the church as an usher, doing it with joy.”

How do the local missionaries make inroads into remote villages that are resistant to the Gospel? Sometimes, by farming.

“I plan a day with them, finding out the hour they usually go to their farms and what are some of the things they do there, and sometimes I take some manpower to work, without asking for a dime,” says the native missionary. “I also help them with some agricultural seeds free of charge, such as corn, tomato, and eggplant, though it is very expensive.”

The love demonstrated in a practical way opens doors – and hearts.

“Only the words of God can make the difference,” the missionary says. “As they come to meetings and hear the words of God, and especially when they begin to see the true love of God being demonstrated before their eyes, they believe and turn their lives over.”

In some communities, trouble-makers are turning into honorable citizens and contributors to society.

At times, the missionaries help people with clothing and alms.

“When I begin sharing the gospel tracts and inviting the community dwellers to worship services, some of them will tell me, ‘I want to come to church services, but I don’t have the clothes to wear,’ while others say, ‘I’m hungry,’” he says. “I try to meet some of those immediate needs; soul winners must have compassion.”

Radio programs and revival meetings also figure in the arsenal of evangelistic tools.

“Just as Jesus told his disciples that the harvest is ripe and ready but to pray that the Master of the harvest employ more laborers, so we have been doing just that with commitment and dedication, and as a result, souls were won to Christ.”