The most amazing story in my collection took place in the heart of Africa in the year 1922.

In that year, the Reverend H. B. Garlock and his wife, of Toms River, New Jersey, volunteered for a dangerous assignment: they were to go to Africa as missionaries to the Pahns, a small tribe in the interior of Liberia. No missionaries had ever before worked with the Pahns. The reason was simple. The Pahns were cannibals.

The Garlocks arrived in Liberia and set up camp with a group of African Christians whose tribal boundary touched that of the Pahns. Almost immediately Mrs. Garlock came down with malaria. Their meager medical chest was soon emptied and still her fever rose. Garlock had a difficult time persuading the natives to take a short route to the coast for more medicine because the way led through Pahn country. 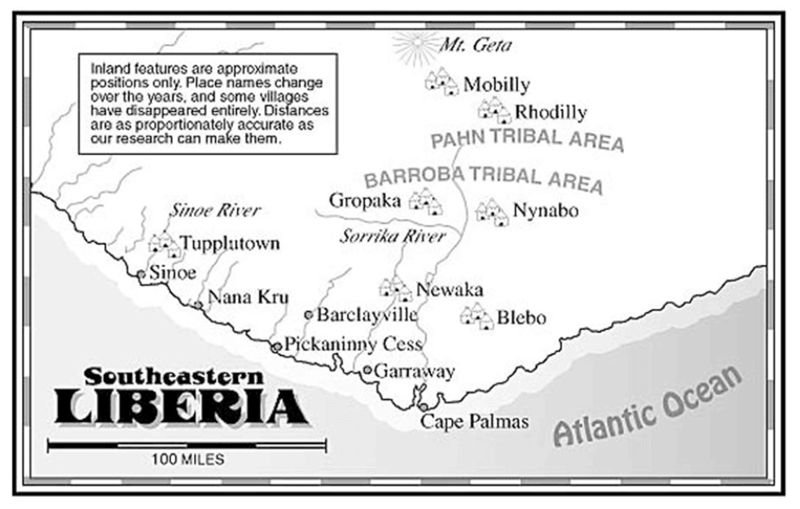 At last, however, Garlock convinced the chief that it was possible to skirt the danger areas, and that if medicine didn’t arrive soon, Mrs. Garlock might well die. One morning at dawn a group of men left the compound and headed out, filled with misgivings, to bring back supplies.

About noon the head carrier suddenly appeared in the doorway of the mud hut where Mrs. Garlock lay. He was out of breath. In gasps he blurted out what had happened. One of his men had been captured by the cannibals. The African assured the two missionaries that unless the man could be rescued, he would be eaten.

Garlock realized that it was his fault. Providentially, his wife’s fever had begun to go down that very morning, within an hour after the supply party had left. Without hesitation Garlock himself set out into Pahn territory, taking along a few hand-picked warriors: he was going to try to get the man out.

Just before dark, the little group arrived at the village where the carrier was being held. A wooden fence ran around the cluster of huts, but no one stood guard. Garlock peeked cautiously through and saw that one of the huts had sentries posted before it. Two men carrying spears squatted outside in the dust. Their hair was braided in long pigtails; their front teeth were filed to a point.

That would be the prison, Garlock decided. He turned to his men. ‘I’m going in,’ he whispered. ‘If there’s trouble make as much noise as you can. I’ll try to get away in the confusion’.

Garlock was counting on two facts to help him. One was the probability that the Pahns had never seen a white man: he hoped that this would give him the advantage of surprise. The other was that he believed the miracle stories of the Bible, telling of supernatural help coming when it was needed most. Garlock was praying as he stepped into the cannibals’ compound. He was praying that God would show him step by step what he should do.

Walking as straight and as tall as he could, he strode directly toward the prison hut. The guards were too astonished to stop him. He walked between them and ducked inside the hut. Outside, he heard the guard begin to shout: he heard feet slap against the packed earth as others ran to join them. In the dark interior Garlock crawled forward until his hands touched a figure tied to the center pole of the hut.

Garlock slipped a knife out of his pocket and cut the bonds. The carrier spoke to him. But seemed incapable of making any effort in his own behalf. Garlock dragged the terrified man out through the door. But that’s as far as he got. There in the courtyard was a yelling, threatening crowd of Africans armed with knives, spears and hatchets.

Garlock listened for his own men to start a distraction. But outside the compound all was silence. Garlock knew that he had been abandoned.

There was nothing for it except to try a bluff. With great deliberation he settled the prisoner up against the hut, and then he himself sat down on the skull of an elephant that stood beside the door. All the while he was praying. The crowd kept its distance, still yelling and milling, but not coming close.

A full moon rose. Garlock sat quietly on his elephant’s skull. Finally the people squatted down in a great semicircle facing the hut. In the center of this ring, Garlock thought he spotted the chief and beside him the village witch doctor.

Suddenly this man stood up. He ran a few steps toward Garlock, then stopped. He held out a reed wand, shook it at Garlock, then started to stalk back and forth between the missionary and the chief, talking loudly and gesturing occasionally toward the prisoner. Garlock could not understand a word he said, but it was clear to him that he was on trial.

The witch doctor harangued Garlock for an hour, and then quite abruptly he stopped. He came, for the first time, directly up to Garlock and peered into his face. The witch doctor thrust his neck forward, then drew it back amid the cheers of the onlookers. Then, with great ostentation, he laid the wand on the ground at Garlock’s feet. He stepped back, waiting.

Silence fell over the tribe. Garlock gathered that it was now time for him to speak in his own defense.

But how! Garlock did not know one word of the Pahn language. The crowd began to grow restless. Stalling for time Garlock stood up and picked up the wand. Instantly the natives fell silent. And while they waited, Garlock prayed.

‘Lord, show me what to do. Send your Spirit to help me’.

Suddenly Garlock began to shake violently. This frightened him as he did not want the others to see that he was afraid. But with the trembling came a sense of the nearness of the Holy Spirit. Words of Jesus came to him: ‘Take no thought what ye shall speak, neither do ye premeditate; but whatsoever shall be given to you in that hour, that speak ye; for it is not ye that speak but the Holy Ghost” (Mark 13:11).

Garlock felt a strange boldness. He took a deep breath and began to speak. From his lips came a flow of words which he did not understand.

Garlock saw the natives lean forward, enthralled. He saw that the words – whatever they were – had a stirring effect on those who listened. He knew beyond a doubt that he was speaking to the Pahns in their own language.

For twenty minutes Garlock talked to the Pahns. Then, as suddenly as the speech-power came, it vanished, and Garlock knew that he had come to the end of his discourse. He sat down.

There was a moment of waiting while the chief and the witch doctor put their heads together. Then, straightening, the witch doctor gave an order and a white rooster was brought forward. With a snap, the witch doctor wrung the rooster’s neck. He sprinkled some of the blood on the foreheads of Garlock and the prisoner. Later Garlock interpreted this as meaning that the rooster had taken his place: blood had to be shed, but something ha had said while speaking in the Spirit had convinced these people that he and the prisoner should go free.

A few minutes later, Garlock and the captured man were walking through the jungle back toward the mission station. The chief had even supplied two of his own men to guide them the first part of the journey. In time, the Pahns gave up their cannibal life and were converted to Christianity. Garlock is certain that the beginnings of the conversion came with the seed sown while he stood in a flood of moonlight and gave a speech, not one word of which did he understand.

Excerpt from: John L. Sherrill, They speak with other tongues, published by Fleming H. Revell Company, 1968. (Sherrill also co-authored God’s Smuggler and The Cross and the Switchblade. He passed to his reward in 2017 at age 94.)

H.B. Garlock and his wife, Ruthanne, published their own missionary account, Before We Kill And Eat You: Tales of Faith in the Face of Certain Death, published by Regal, 1974