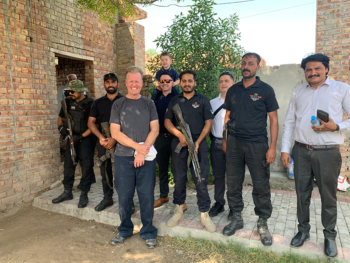 Surprisingly, it wasn’t the healing miracles or the massive crowds that impressed me most on my short term mission trip to Faisalabad, Pakistan. It wasn’t the amazing hospitality or the open door for the gospel.

What impressed me most was the burly guys with guns. Local authorities spontaneously assigned us a security detail, 10 police commandos with AK-47s and shotguns. They controlled the perimeter, loomed ominously on the platform, and escorted us about town with sirens blaring everywhere we went.

Why did three Americans and one Aussie get such protection? Because lurking in Pakistan there are a quantity of Muslim extremists who think they are doing the will of Allah by killing Christians. In 2002, extremists threw hand grenades in the Protestant International Church in nearby Islamabad, killing five. 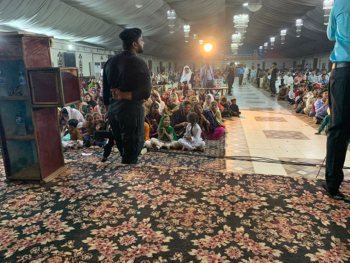 Authorities in Faisalabad weren’t messing around.

Pakistan is a complex nation. It has a secular Constitution and affords some serious protective measures not only for Christians (representing 2% of the population) but all religious minorities (Shiites also face persecution from the Sunni majority).

I’m no stranger to danger. I maintained a low profile in Guatemala as a missionary for 15-and-a-half years. We successfully remained under the radar until a bank teller tipped off his crime syndicate associates, and they cornered us at a stop light. Four guys on two bullet bikes cased us. One guy hopped off the bike, banged his handgun against the window and demanded the bags. He knew where the cash was. 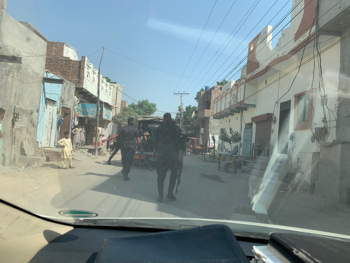 They got more than they bargained for. Unluckily in that backpack were records of bank transfers that – I believed – would make them want to come back for more. I was certain they would stage a kidnapping of my children, and I was unwilling to risk further ministry in the nation I had come to love.

Ten years later, the opportunity to go to Pakistan was different. It turns out that I didn’t need to leave my wedding ring at home. Petty crime doesn’t seem to be the much of a problem (unlike Guatemala). The problem? Jihadists.

I was told NOT to publish on Facebook dates and details of our October trip beforehand. I was warned to be very circumspect when asked questions by strangers. I am a teacher visiting for purpose of tourism, I was instructed to say. Nothing more. 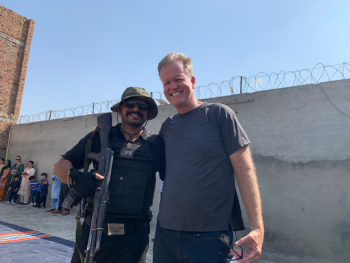 I blew my cover anyway. There were two guys outside the pastor’s hotel room, and I assumed they were disciples from his church and conversed breezily with them. Just hours earlier at that same spot, there were disciples, and I didn’t recognize all the faces. Pastor didn’t know the new guys.

Pastor Sarfraz had a stern talk with me: Don’t tell random people the true reason of our visit. “Not everyone is good in Pakistan,” he cautioned.

I was more embarrassed than nervous. I had prided myself on being a smart secret agent for Jesus, a sort of Jesus 007.

Once on a trip to Cuba, I picked out exactly who was a mole and how she was baiting me to criticize the Cuban government but first bad-mouthing it herself. I wasn’t caught off guard. If I were to openly criticize it, no harm would come to me – it would come to my hosts. So, I disagreed with her, praising Cuba’s health and education system. Crisis averted. 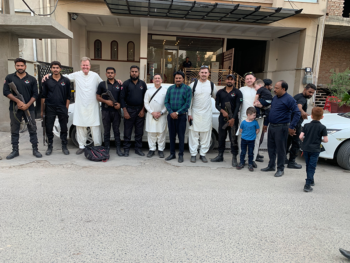 Not so in Pakistan. In my naivete, I confessed sincerely that I had come to preach the gospel. That admission, if heard by the wrong people, could be dangerous. I never saw those two guys again, and I don’t know who they were. But nothing bad came of it either.

We were surrounded by elite police at every step outdoors. They walked in front of us, behind us and to the side of us. When I needed to use the restroom, an AK-47-toting, menacing-faced. dressed-in-all-black cop preceded me. He even checked the bathroom before I could go in to see what terrorist might be lurking inside.

No extremists got me. Traveler’s diarrhea did.

The only attack I suffered was a battle waged by either amoebas or too much curry spice in my guts. ☹ 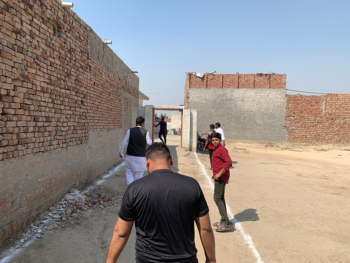 The security measures were elaborate. In addition to the cops, there was a group of 20 ushers who formed a ring around us outside of the ring of police. Holding hands to form a barrier against the crowd, they ran ahead of us to clear the way.

A friend in the United States says I was being treated like a rock star. But my mind compared it more to a presidential motorcade. For a few days, I felt like a celebrity. A celebrity missionary.

It was reassuring to count on these bodyguards. Initially, I was a bit nervous about going to Pakistan, and my wife was more than a little nervous.

As the days passed, these cops with mean faces began to smile, relax and enjoy themselves more. We took pictures together and became friends. We played cricket on the last day.

They heard the gospel, maybe for the first time in their lives. Now that they are my friends, I wouldn’t want them to miss the love of Jesus.

When you go into dangerous countries, you either go low profile or high profile. Low profile means you don’t wear flashy clothes or jewelry. You don’t flaunt expensive cars. You try to blend in with the natives as much as possible.

Despite my height (6’4”), my blond hair, my blue eyes, “low profile” is what I did in Guatemala. I rode public transport, dressed humbly, walked the streets and interacted like a local.

This doesn’t mean I didn’t have to watch my back. I meant that I was signaling to thieves that if they attacked me, they wouldn’t get much. (I was pick-pocketed twice. Thieves stole my cheap phone once on the bus along with everybody else).

I was fully expecting to go low profile in Pakistan. To go “high profile” means you get bodyguards. It’s expensive, and often you can’t trust the security detail (because they may be in cahoots with the criminals). The bodyguards are a two-sided coin; you are making yourself a target, informing evil people that you are somebody worth attacking.

So the unexpected decision by local police to protect us was a measure I had never used or experienced.

In retrospect, I think the greatest danger was not the jihadists. It was the motorists.

Pastor Tim Moynihan, who invited me on the trip, says he’s never seen more aggressive and dangerous driving anywhere in the world. Not even Jakarta. He’s well-traveled, more than me. The worst driving I had ever seen previously was in Mexico City. Automobile accidents are a leading cause of morbidity for Americans abroad.

I had prayed and weighed the risks of religious extremism and was ultimately prepared to pay the price for Jesus. Death or carnage due to a car accident was a different matter however.

I was praying on every road trip, which is a good thing to do even if the driver is using appropriate caution.

My two American friends teased me. The reason I sat in the middle of three across the back seat is because my shoulders span was narrower than theirs, so it was more comfortable for everybody. But my spot made me look like the important guy between bodyguards.

They called me “Mr. Ambassador.”

I called them my “associate diplomat” and “chief of staff.”

You have to face danger with humor, even if it is dark humor. It is an acceptable way to process fear.

They make sobering decisions as to what protective measures to use and which to NOT use. Part of their calculations is the reality they could die.

Pakistan is a mixed bag. It was founded as an overt Islamic Republic, a refuge for Muslims being persecuted by Hindus in the recently formed India. Its people have aided and abetted the Taliban on the Western side (which is closed to foreigners like me). Others have fought alongside the U.S. government against terrorists.

The gesture was striking and significant, though there was a risk of promoting universalism. Everybody knew what he was talking about even though he was speaking even-handedly. He was criticizing Muslim extremism and showing solidarity with Christian minorities.

It was a genius move by Pastor Sarfraz. It’s good to have a well-connected ally on your side in the event of any problems, whether from the government or outside.

I won’t miss my security detail. Being a high-flying celebrity isn’t my secret fantasy. I’m back to riding my bike and the bus around Los Angeles.

I’ll be praying for the people who are willing face the risk of being a Christian every day in Pakistan.

Read also Mike Ashcraft’s report from Pakistan: Christians in the brickfields of Pakistan.