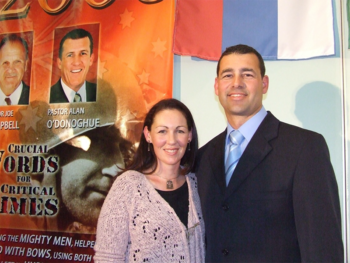 Darren Munzone reacted to his wife’s newfound faith in Jesus and belief in the rapture by sneering: “Oh, you’re still here? The UFOs haven’t gotten you yet?”

He could tolerate the fact that she had gambled away their savings of $10,000. But he couldn’t stand the fact that afterwards she became a born-again Christian. “To me it was like she had become a nun or something. I was just not happy.”

He lashed out at her: “If I would have wanted to marry a Christian, I would have gone to church, But I met you in a pub. This is a rip off.”

Born to an Italian immigrant father, Darren always identified as an Aussie because of discrimination against immigrants, he says on a Virginia Beach Potter’s House podcast. He had basically no background in Christianity.

Admittedly, he was the bully of the classroom and got into scrapes frequently. When his mother divorced and remarried, he took out his frustrations by fighting with the neighborhood boys. His penchant for violence went right along with his dream to be a rugby player. 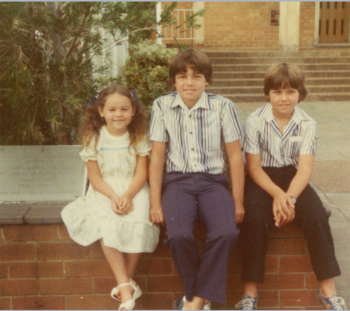 “I got into lots of trouble because of fights as a teenager,” he says. “I rebelled against my mom and my stepdad.” He didn’t talk much to his stepdad except two to three times a year.

For rugby league, he practiced very hard but wasn’t big enough and wasn’t gifted in the sport. Ultimately, a series of injuries sidelined him when was semi-professional, so instead, he turned to coaching, where he excelled.

“I’ve broken all my fingers,” he recounts. “I literally had my ear ripped off the side of my head and had to have it sewn back on. My AC joint in my shoulder – serious shoulder problems. I’ve had two knee reconstructions.

“I was far more successful as a semi-professional coach.”

The woman who became his wife was a nurse, and together they made enough money to qualify for a home loan. But when the broker informed them the term would be 30 years, Darren and Joanne looked at each other and walked out. 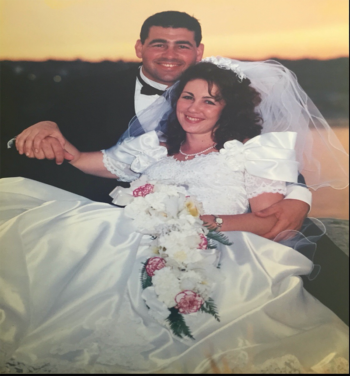 Instead of tying themselves down for 30 years, they decided to travel to England and Europe for two years for a work-cation. “I was running away from the broken dreams of becoming a professional sportsman,” Darren says. He played cricket in England.

After one year of living in England, Joanne had a miscarriage, and the subsequent sadness deprived her of all desire to keep vacationing. “She was devastated by that,” Darren says.

They returned to Australia, where Joanne’s depression deepened and widened even though they finally married.

“She blamed herself that we’d come back from our overseas trip a year earlier than expected,” Darren says. “She thought I was angry that we’d cut our holiday. To escape the depression, she started gambling.”

She played poker machines at the local bars. “This went on for some time until she had gambled all our money away,” Darren says. 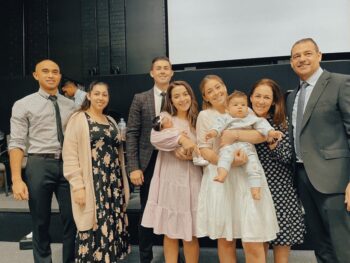 The depleted savings was not just bad – she sought Jesus because of it after a co-worker invited her to church.

She broke the news about her secret gambling addiction and subsequent losses to Darren, who despite being hooked on money didn’t get too upset. “I was annoyed but I thought we’ll recover from that.”

What really upset him was when she informed him that she had become a born-again Christian. “That’s where I really lost the plot,” he admits. “From that point on, she lived for God but I totally rejected that and fought against that. I was never violent towards her, but I was violent with my words. I hated with a passion that she had become a Christian.”

For years, she went to church while he pushed back against it, he says.

Darren didn’t know really anything about the Bible. But what few notions he picked up, he used against her to argue. He mocked the rapture by saying UFOs hadn’t taken her off the planet yet.

Still money-motivated, Darren one day attended a financial seminar, and his wife came along to support him. When it was his turn to support her, of course she invited him to church. 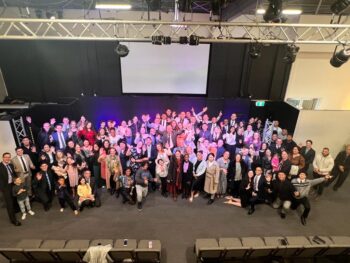 It came about with an unusual prayer request. Joanne got challenged to believe for her husband to get saved on a specific date. (Usually Christians should never try to impose a timeline on God because we’re in no position to tell God what to do.)

By the time December rolled around, it turns out that the church was holding revival services on Dec. 17th, a Sunday. The special speaker happened to be a sportsman. So Joanne invited her sportsman husband to listen to the sportsman speaker.

Little did she know that her husband was mulling death. His father had died a couple years earlier at 50 of a sudden heart attack. “Where would my dad be in light of eternity?” he wondered. “What does God think of my life?”

“I had nothing in me that day that said, ‘I want to become a Christian.’ In fact, it was the complete opposite. On the way to church that day, I said, ‘I’ll go with you but I’m not talking to anybody. I don’t want to be friends with anybody. I’m just going to support you and see what you do, and then I’m outta there.’”

Darren even fought her over the fact that her church was an hour away. “Who in their right mind drives an hour to go to church?” he complained in the car. “This is stupid. The next church we drive past, let’s stop there, that’s where we’re going to church.”

After fighting the whole drive, Darren arrived and tried to sit in the back row. But the evangelist greeted him at the door with a hearty handshake. “His hand was about five times the size of mine,” Darren observes. The evangelist pulled him warmly to a front row seat.

Darren felt anything but comfortable.

“I was shaking my head,” he remembers. “I was thinking, What in the world am I doing here? I don’t want to be here. I was full of pride, full of ego.”

Throughout the worship service, Darren kept his hands jammed in his pockets. But his thoughts about death came back to him while the evangelist was preaching. At the altar call, the evangelist challenged the congregation: “If you’re not right with God, you’re going to spend eternity in Hell.”

“That sounds like a very brutal statement, but it answered my questions,” Darren says. “I asked where my dad would be and what did he think of my life. I knew I was not right with God and I knew I would go to hell if I died. I didn’t know where my dad was, but I knew where I was going to be.”

The power of the Word and the Spirit moved in his heart. Spontaneously, he stood up and walked to the altar. It was Dec. 17th, 2000.

“I prayed a sinner’s prayer,” he says. “After I prayed, the whole church was weeping. The visiting speaker was like, ‘I didn’t think the sermon was that good. What’s going on?’ Then they told him they’d been praying for me for years.”

On all the car ride to church, Darren had sworn he would never accompany her again. But now, he kept asking about church. When was the next service? Could he go with her?

Suddenly, God implanted a ferocious spiritual hunger in his heart. He wanted to learn more.

With the passage of months, he attended a stirring Bible conference with the same church, the Potter’s House, a zealous church-planting movement. He felt the call to preach.

His beloved rugby starting becoming an obstacle to his new ambitions, and he eventually quit. They moved closer to the church to be in prayer and outreach.

After years of shaking his fist at God, Darren Munzone is now pastoring a church in Hurstville, Australia.