For 15 years, Victor Martel was running from God. His mother got saved, his father, his two brothers and five sisters. He was too busy consuming drugs and hanging with the homies. Everywhere he went, Christians witnessed to him, and he tried to avoid them.

Then he received a life sentence in prison.

During the first week in his cell, God spoke to his heart: Can you hear me now?

Victor’s journey into darkness, coming to Christ at age 19, his subsequent falling away and jail sentence is a lesson of what happens to those who run from God.

Victor grew up in rough neighborhood in Banning, California, where he joined a gang, drank alcohol, and consumed drugs. In his hood, he couldn’t conceive of any other kind of life because it was all he saw.

“I had no choice. I was born in that neighborhood,” Victor explains to God Reports. “There was a principality that covered the area. There was no way out. It was the only lifestyle I knew.”

At 15, he got shot in the back and cried out to God for the first time to spare his life.

Despite God answering his prayer, Victor stubbornly persisted in sin. His house got shot up as result of his involvement in the gang. At 17, he started heroin.

Two years later, Victor lost his best homie, and he cried out to God again.

Then God did something remarkable. He placed a burden on the heart of a pastor from the Potter’s House Church, so the pastor began looking for the most desperate person to evangelize and was drawn to Victor’s house.

“He came to my house,” Victor says. “I wasn’t trying to be famous that way.”

In response to the gospel message, Victor accepted Jesus and began attending church in Beaumont, a few miles away. Victor attended for three months and then “didn’t follow through. I got caught back in doing what I wanted to do.”

The pastor visited regularly to encourage Victor to return to church. “Tell him I’m not here,” Victor told his mom, succumbing to the spiritual warfare of the evil one, dragging Victor back into bondage.

Instead of Victor continuing to follow Jesus, his mom got saved. His dad got saved. One by one, his brothers and sisters all came to Jesus.

Victor still persisted in drugs and gangbanging, turning his back on God.

“I gave my life to Jesus, but I didn’t stick with it.” he acknowledges. “I knew that I wasn’t the same person. I had a conviction of what was right and wrong. I began to run away from God. Everywhere I went, I would see Christians, I would try to avoid them. But God was on my tail.”

His little nephews and nieces, pulling on his pant legs, begged him to go to church. The girls had tears in their eyes.

“You’re going to hell, Tío,” his 4-year-old nephew told him.

He knew they were right, but the influence of drugs left him defeated. “I kept running.”

As the years passed, Victor met a girlfriend and had a daughter, for whom he cleaned himself up.

For 2 ½ years, Victor stayed sober. But when his birthday approached, he wanted to celebrate with some heroin. He asked permission of his girlfriend to use. She said yes. 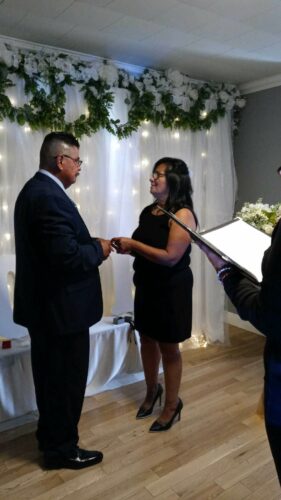 He called his supplier. “Where you been?” the dealer picked up. “I’ve been waiting for you to call.”

Victor thought he could pick up right where he left off with the same dosage. He didn’t realize that coming off drugs lowered his resistance.

When he shot up, he started dying. He was gasping for air. He could only see in tunnel vision. His girlfriend was screaming, but he couldn’t see her.

Once again, Victor cried out to the Almighty to spare his life. “God, don’t let me die,” he prayed inside his head.

Through his tunnel vision, he looked at the screen door and saw the light though it. “If only I could make it to the screen door, I knew that I would be all right, I could catch my breath,” he said. The screen door was a symbol of Jesus, who the Bible calls “The Door” and The Light of the World.”

Struggling and gasping, he managed to make it to the screen door and finally began to breathe normally.

When his girlfriend left him and took his daughter, he still took drugs.

That’s when the violent incident happened that led to his life sentence. A “friend” hit him with a crowbar, once, then a second time. Standing up for Victor, the other homies attacked him and stabbed him so that he nearly died, Victor says. 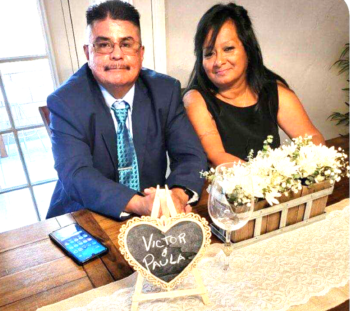 The man with the crowbar didn’t know the other guys, so he blamed everything on Victor to the cops.

Because of his stubborn pride, Victor didn’t testify in his defense in court, nor did he finger the true perpetrators, he says. He also refused plea bargains.

As a result, he got a life sentence.

“Even though I didn’t commit a crime, there were plenty of others that I did commit that I didn’t get caught for,” Victor acknowledges.

During his first week, God spoke to his heart: Can you hear me now?

On his knees in his cell, he prayed.

“In that cell, the only place I could go was up,” he says.

Relenting from his stubborn resistance to God, Victor broke down and began serving the Lord. He attended chapel, read his Bible, prayed and talked to other inmates about Jesus. He kept on the straight and narrow.

For 15 years, he had been running from God. He spent 21 years in the state penitentiary.

He memorized verses from the Bible to encourage himself that, despite the life sentence, he might one day be released.

Do not fear, for I am with you. Do not be afraid, for I am your God. I will strengthen you, i will help you, I will hold you up with my righteous right hand. – Isaiah 41:10

May your God, whom you serve continually, rescue you. – Daniel 6:16

In 2019 at his fourth parole hearing, without any writeups or disciplinary actions, with letters of recommendation from corrections officers in hand, Victor finally got released. The commissioner, a former police chief, read the letters and told Victor: “Mr. Martel, you should have been out a long time ago.”

Today, Victor, 57, is married and serving Jesus in Van Nuys, CA. He works for a subcontractor for CalTrans doing highway maintenance.