James Tughan doesn’t blame the cops for shooting his son after he pointed a (toy) gun at them. James himself had called the police after his adult adopted son, his brain altered by drugs and concussions, had called to threaten James’ life. He recognizes the police were there to protect the innocent.

“I can’t really hold anybody responsible for that except Alex,” James says on a 100 Huntley St. video. “He provoked it”

He could not defuse the family tumult that resulted from the incident, so he now pours his pain into his drawings on paper. An accomplished artist in the realism genre, James explores the fragility of relationships in a world fraught with sin, but at the same time offered hope through the redemption of a loving Savior. 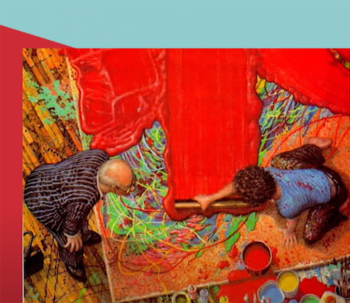 “This is how I deal with this phenomenon,” he says.

James Tughan grew up in a Christian home in Toronto and found faith in Christ, but not all was as it seemed. There were fissures. Unlike many who reject the faith of their parents because of some level of inconsistency between action and diction, James incorporated the jarring dissonance into his art.

With eye for detail, James excelled in realism and became a sought-after artist for commercial pieces for 25 years.

But recently, he’s turned more to fine art, wanting to give voice to a vibrant faith struggling with a shattered reality.

He married and had a beautiful family. He and his wife adopted Alex, who excelled in sports.

It was accidents on the snowboard (he preferred not to use a helmet) and a drug habit that started in the 7th grade that doomed Alex. His parents didn’t catch on to his drug use until it had devolved into ecstasy and heroin. Alex warped into an aggressive and hateful young man.

“In the end we ended up with a perfect storm,” James recounts. “Alex stopped being Alex, he became someone else. Our house was a war zone. He had become a con artist and a liar. You feel helpless, you do everything you can think of to do. You refuse to give up, especially because he’s adopted.”

It became so extreme that Alex had to be removed from the home. His parents were at their wit’s end, doing everything they could think to rescue their beloved son. Sadly, every effort came up short.

At some point, the angst-filled youth called and threatened his family. Evaluating the seriousness, James made a painful decision to call the authorities with hopes they would intercept Alex and perhaps get him the psychological help or rehab he so desperately needed.

Unfortunately, Alex pointed a toy gun at the cops, who in a millisecond could not discern between a real gun and a toy. It looked like a regular firearm, not a toy. Swat fired and Alex fell.

He could only turn to his art as an outlet.

“It’s a safety valve,” he says, “For me, the issue then becomes how do I deal with this phenomenon afterwards in my own work?”

“When you infuse faith into your art what does that look like?” he ponders. “You do things as an artist unconsciously and consciously. Unconsciously I looked at things really closely; I became a realist.”

There are many artists like him who believe in God, honor God and meld belief into art.

“I think there is this assumption in the modern world amongst the church that artists are not interested in the truth,” James says. “Personally, I would love to see us working in partnership with pastors and priests to teach. We believe, myself and my colleagues, that the original artist was Jesus. He’s the most ingenious creative mind that the universe has ever known.”