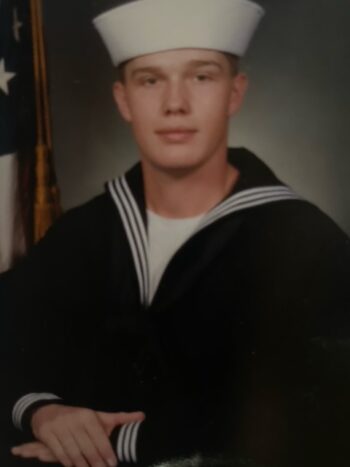 The thirst for alcohol, the perverted thoughts, all left him the instant Mitchell Collins prayed: I don’t want to be the man I am anymore. I’m sorry for the things I’ve done. Jesus if you’ll come into my life and change me, I’ll live out the rest of my days for you.

“When I gave my life to Jesus, there was a dramatic change,” Mitchell told God Reports. “The thoughts that I had towards women changed overnight. Before Jesus I had thoughts all the time about women when they walked by. Afterwards, there was self-control. I no longer wanted to think of women in that manner. I had respect for them.”

As a lead petty officer in the Navy over a group of men, Mitchell had mocked the Christian in his group mercilessly. Now that he had accepted Jesus into his heart, what was he to do? “I didn’t tell anyone that I got saved for two weeks.” 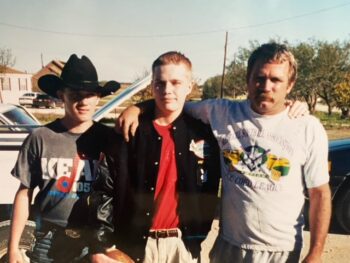 The leadup to salvation was a long history of sin and soullessness. Born in Merkel, Texas, population 2,500, into a family of alcohol and crime, Mitchell didn’t see much future for himself as a cattleman. So he shipped out with the Navy straight out of high school. 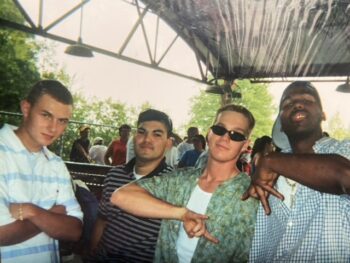 In the Navy, Mitchell completed one tour in the Mediterranean and Persian Gulf and spent the rest of his time in Norfolk Naval Shipyard, assisting with maintenance on the nuclear-powered U.S.S. Dwight D. Eisenhower aircraft carrier.

That’s where he met Freddie Valero, who had stopped drinking after accepting Jesus and talked to everybody about salvation. Mitchell, who was in charge of the group, mocked him and incited the others to tell dirty jokes and drink. He also would deny Freddie’s request for Sundays off to attend church.

“I was giving Freddie a very hard time as his supervisor,” Mitchell admits. “I was always telling him he was using his religion as a excuse to get out of his work.” 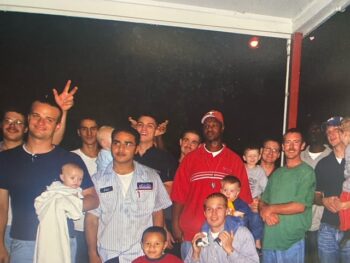 But then Grandma died. Mitchell had spent the last weeks with her in the hospital and watched how cancer consumed her.

A short time later, the 9/11 terrorist attacks on the Twin Towers happened.

Both events shook him to the core.

“Everything that I thought was firm and stable I realized was not as certain as I thought it was,” Mitchell remembers. 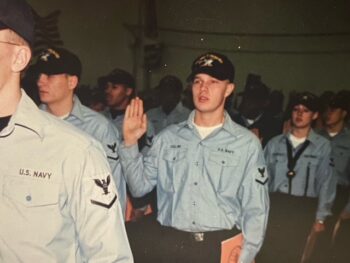 “Nothing happened,” he says. “My prayer just bounced off the ceiling.”

Mitchell got mad at God. He went to the refrigerator and grabbed a beer.

Then he mused on what he had just done.

“Man, I just yelled at God,” he thought to himself. “That’s pretty stupid. He might be mad at me.”

So instead of drinking that beer, he tuned in to a Christian television station for the first time in his life. A preacher from the 1950s in black and white taught about accepting Jesus.

(Meanwhile, in New Mexico, his high school sweetheart, with whom he hadn’t talked in ages, tuned into the same broadcast (probably). That becomes important because later, after rekindling their discontinued phone conversations, he married Sherrie.)

Mitchell repeated the prayer of salvation as directed by the T.V. preacher.

“Immediately the desire for alcohol was gone,” he remembers. “I poured out my case of Natural Light. I poured out my gallon of Canadian Mist. The thoughts about women were gone. I was still single. I still had the attractions of a man. But the images in my brain were gone. Instead of looking at a woman, I would turn the other way.”

He was born-again, but he was terrified to let anyone know. This was mainly because he had been mocked before when he once wanted to read the Bible. He worried he would be interrogated and ridiculed.

Also, it was awkward for him to break the news to Freddie Valero, whose life he’d done his best to make miserable for being a Christian.

Fortunately, Freddie broke the ice. He showed up at Mitchell’s apartment and invited him one more time to church. This time Mitchell said yes.

“He was as shocked as I was that I had finally said yes,” Mitchell recalls.

Mitchell got filled with the Holy Spirit at church and began preaching to his men. That was 2002. In 2005, he was ordained a pastor with the Christian Fellowship Churches and went to Suffolk, VA, to show movies and share testimonies in parks and from door to door to start a church.

With his new bride Sherrie and two babies, he “pioneered” a church that saw drug dealers come clean and demon-possessed men get freed.

One guy, Romeo, who was a drugs-and gun-runner on the East Coast, would come and pound on his door any random hour of the day. Mitchell tried ministering to him, but Romeo grinded his teeth at the pastor and growled: “Preacher, I can’t get you out of my head. I don’t know why I come to you. You’re in my head.”

One day, Romeo showed up in white T-shirt covered in blood, which scared Sherrie. Mitchell decided to cast out demons and warn him to never show up at the apartment in such a condition again.

The next time he saw Romeo, the guy came to church well-dressed and offering to help with anything.

The run on the startup church was full of work and wonders, but Mitchell had to learn to be frugal with his money and financial stress eventually brought him back into his “mother” church for “redirection” training. He had to learn to be a good steward with his finances.

Today, Mitchell is pastoring again with his wife and three kids, ages 17, 16 and 4, in Charlotte, North Carolina.