Right there in the back of the patrol car, Robert Michiels slipped out of the handcuffs, unthreaded his shoelace, tied the two laces together, hung them from the coat hook, inserted his head and attempted to hang himself.

“I felt my life slip away.” Robert says on a Virginia Beach Potter’s House podcast. “I watched my life flash before me rapid fire in little clips. Everything, from the time I went fishing with my dad and my brother, opening presents on Christmas, climbing up on the roof, riding our bikes, skating in the neighborhood.”

Then a loud voice from Heaven pronounced an imperious command.

Instead of committing suicide and ending his drug-addicted misery, Robert Michiels, then 20, went to jail and got saved. Today he is a pastor.

The North Phoenix native was the kid your parents warned you to stay away from. He liked to get into trouble and quickly fell into drugs by age 15.

But after drugs reduced him to homelessness. Not even his mother would receive him that night when he called her in desperation, wanting to get off the streets. Robert doesn’t blame her; he had stolen from her the previous time to support his habit.

At the end of his rope, he formed the plan to commit suicide. But first he would get high one last time.

To scrape money together, he stole a pickup truck so he could resell the tires. They were worth a fortune, but Robert offloaded them for $50 each to a guy who paid cash and didn’t care about their provenance.

But when he was stealing the first one, people shouted and he had to drive off, cursing his luck that he’d only gotten one. As he roared off, a trucker pursued him, talking to the cops as he followed.

Robert slammed his truck in gear and drove straight at the trailer cab. He slammed into it, leaving it damaged. He drove off.

Robert careened through a muddy field that splattered mud on his windshield. He couldn’t wipe the windshield clean, so he rolled down his side window and leaned out to see where he was going.

He never doubted that he would get away. For the whole 22-minute pursuit, he was smoking his crack pipe.

Then he slammed into a pole. He woke up with the engine pushed into him; he smelled of radiator fluid. He credits his limp, drugged up body for his survival. He gathered himself, pulled himself out of the truck and ran down an embankment, into a mud gulch where there were crackling bushes.

That’s where he lay down quietly. Any movement would cause the bushes to crackle and give away his position to the cops. He could hear them searching for him.

The flashlights got closer and finally showed him.

“I give up,” Robert responded.

“Come towards the light,” a cop shouted.

He moved forward. Then a fist, which he couldn’t see because he was staring into the flashlight beam, smashed into his face.

“I deserved to be punched,” he says. He had led the cops on a treacherous high speed chase and had even pointed his onrushing pickup straight at a cop car. The cops had gotten muddy pursuing him into the gulch. They were not happy at all.

They dragged him handcuffed up the gulch. A few more punches smacked against his face and head. Some cops shoved dirt into his mouth.

Then, he was slapped into the back of the patrol car, where he sat for 10 minutes.

“Being the escape artist that I am, I got out of one of my handcuffs,” he says. He strung his cinching noose, hooked it to the coat hook and hung himself.

He was dying. Then the voice stopped him.

The supervisor pulled up. He was grumpy because it was late, and he had to be summoned for a problematic suspect. 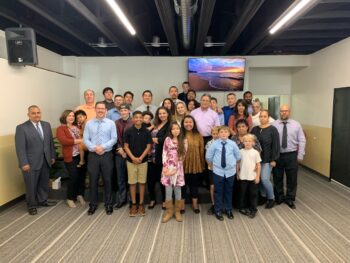 “The cops had no idea that I almost committed suicide in the back of their car,” Robert says. “They were just glad to have their guy. It’s like the dog, you throw him in the kennel and you’re good to go.”

The first question the supervisor asked was why his face was so bruised and battered.

“I wanted to say, ‘Well, your guys freaking punched me,’” Robert recalls. “But I was processing the situation and with a little street smarts, I said, ‘I fell.’”

The supervisor read Robert his Miranda rights and he was taken to county jail.

Robert figured he could still commit suicide in jail if things were too rough.

When he got to jail, a fellow inmate who reviewed his charging papers said he would do 15 years. He told him to “roll with the whites” if riots were to break out and explained to him the rules.

“I went to sleep for a month, literally,” Robert remembers. “I would just wake up to eat, go to the bathroom, take a shower and then literally just go back to bed. I was coming off drugs.”

Robert began reading the Bible. “I had nothing else to do,” he says. “I did pray.”

He lost every fight he got in, except one. He never had to participate in race riots.

He got out early because he submitted to seven years of probation.

He stayed with Mom, found a job at Pizza Hut, and struggled to establish himself and comply with probation. He miraculously got an apartment and his neighbor turned out to be Pastor Bernardo Martinez. He explained the Gospel and asked Robert to say the sinner’s prayer.

If you acknowledge and confess with your mouth that Jesus is Lord [recognizing His power, authority, and majesty as God], and believe in your heart that God raised Him from the dead, you will be saved. (Romans 10:9 AMP)

“God bowed the Heavens for me,” Robert says. “I went to church and heard some preaching. I literally thought my wife had told my life to the pastor.”

Robert again responded to an altar call on Sept. 26, 2001, and he became an evangelizing machine. “Everybody I knew I would tell, God is real,” he says.

Michael Ashcraft is a pastor and a financial professional in Los Angeles.